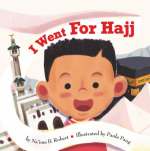 Before I review this delightful book, I would like to make a public service announcement of sorts.  It is not Hajj season, not even close.  I pre-ordered this book on June 23 from Amazon, I should have/was supposed to have it before Hajj in the middle of July.  I got it TODAY! When I realized that the US publication date was delayed for a book already published in the UK, I reached out to Kube Publishing and they suggested trying “an independent bookseller such as IslamicBookstore.com or CrescentMoonStore.com.”  I know this.  Noura is a dear friend, but I messed up.  Please don’t do the same.  SUPPORT LOCAL BOOKSELLERS! I’m sorry, lesson learned.

Now back to the book that already feels like a classic staple that needs to be on every Muslim families book shelf, and in every public learning space for non Muslims to enjoy and benefit from as well.   The 31 page “inspirational, semi-fictional narrative” is perfect for ages two to seven as it mimics the beloved Eric Carle and Bill Martin, Jr. classic, Brown Bear, Brown Bear, What Do You See? but framed around Hajj and what is seen, done, and heard.  Each two page spread begins with, “Hajji, hajji…”.

The book starts with a detailed Note to Parents and Teachers that explains the points to highlight, and discuss with children.  The story is then organized by the steps of hajj in broad strokes and illustrated with both charm and detail that will hold readers and listeners attention.

Hajji, hajji what did you wear?

And my shoulder was bare.

The book starts with the little boy narrator on the plane looking down on the clouds and sea. He then puts on his two sheets, hears the call to prayer,  sees the black stone and the station of Ibrahim before he makes his seven tawaafs, runs between safa and marwa and heads to Mina. He prays at Arafat like the Prophet (saw) did, and falls asleep in the cold night desert air.  He sees stones being thrown and eats meat on Eid before getting his head shaved.  The book concludes with a glossary.

The book is well done and is a great mix of information and entertainment, alhumdulillah.

At 18 pages, this 8 x 8 book focused around colors contains a lot more information than what initially meets your eyes.  The warm beautiful, full page pictures fall opposite a highlighted color and a description of that color in the child’s world that reminds the characters of their time at Hajj or celebrating Eid al-Adha.  On each of the fun text pages is a light green text box at the bottom with factual information that older children or adults will benefit from and be able to share with younger listeners.  The main text is ideal for toddlers and up, and older kids up to 3rd grade will benefit from the nonfiction highlights that can educate or remind Muslims and non Muslims alike, about the importance of Hajj and Eid al-Adha. 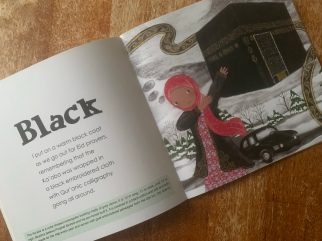 The book starts with an introduction about the Islamic language and perspective used, and clarifies that the colours emphasized are to help visualize the point being made, it also gives information about Eid al-Adha. 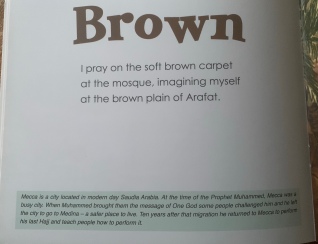 The colors highlighted are: white, black, brown, green, grey, yellow, and purple.  The large simple text takes something relatable such as the monkey bars, or balloons, or the sky and corresponds it to a memory of Arafat, or ihram, or the hills of Safa and Marwa. 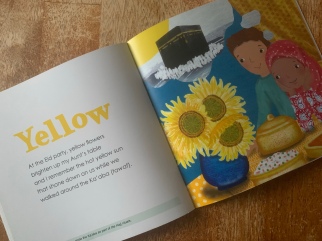 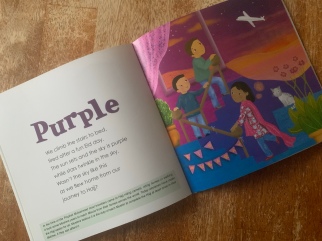 The nonfiction text gives specific dimensions of the Ka’aba, the story of Hajar and baby Ismail, the requirement of Hajj and some of the steps.  There is a lot of information conveyed which at times is incredibly detailed, and sometimes, rather vague and generic, i.e. Tawaf is when Muslim pilgrims circle the Ka’aba as part of the Hajj rituals. Overall, this little book packs a punch, and I was equally impressed at how it held my five year old’s attention with the colors, and my interest with the facts detailed below.

I thought I knew what this latest Owl & Cat book would entail.  I figured like the Islam is… and Ramadan is… books, this book would, in its simplicity, poignancy, and repetitive sentence structure convey the emotions and importance of Hajj.  So imagine my complete surprise when the 78 page book with two familiar characters actually detailed day-by-day the steps of Hajj for young preschool aged readers and listeners and up.

Owl and Cat show what a pilgrim does on each of the 5 days of Hajj.  Each section is separated by days with color tabs on top to keep the steps clear.  The illustrations are a little crisper than in previous books which resembled little doodles a bit more to me.  And while the simplicity of sentence structure, length, and diction remains, the book is a lot more factual and didactic than sentimental, especially compared to the other books in the series. 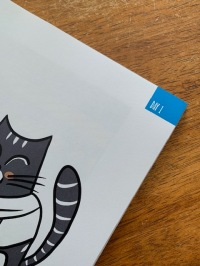 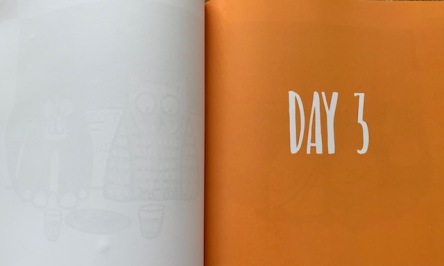 The book starts off with a a list of contents and an informative page about Hajj.  Owl and Cat then pack their bags, and travel by plane to Mecca. Day one has them putting on ihram, performing tawaf, sa’iy, and heading to Mina.  Some details about what each step means are given, but nothing overwhelming or too wordy.  The illustrations show what the text means and offer a lot to the understanding, if the concepts are foreign.

Day two is going to Arafat, and standing in prayer at Jabal ar-Rahma.  They then head to Muzdalifah to rest and collect stones.  It also mentions that “many Muslims who are not on Hajj will fast.” 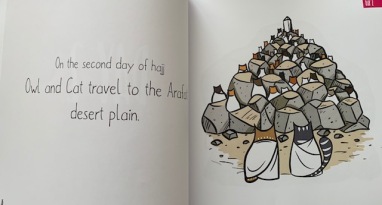 Day three takes them back to Mina to throw their pebbles, make sacrifice, cut their hair, and change out of their ihram before they do their second tawaf, sa’iy, and travel back to Mina for Eid.

Day four is in Mina stoning the jamarat as is day five before they travel back to Mecca to do the final tawaf and drink Zamzam water before their Hajj is complete.

The book would probably work for non Muslims in that it isn’t preachy, but some base knowledge would be needed as there isn’t a glossary.  The book is pretty thorough for a children’s book, but I think the information is needed.  Many children do stimulations of Hajj or read simplified versions and don’t realize there is some back and forth and many of the actions are done more than once, and that it is a lot of actions, steps, and traveling in a short amount of time.

An adorable 40 page paper back book about Hajj aimed at ages 3 and up and told from the perspective of two Pigeons performing Hajj with humans. 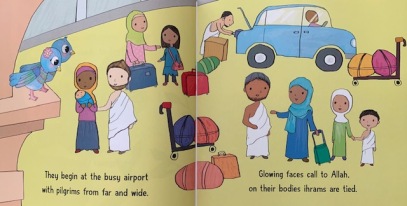 A boy and girl pigeon say Bismillah and spread their wings as they head off to Hajj.  They see pilgrims at the airport wearing ihram before they start circling the Ka’ba like the humans below.  After seven rounds they go to Ibrahim’s Station before they are off to Safa and Marwa while pausing to sip on Zamzam.

With Umrah complete they are off to Mina, then Arafat where duas are made.  They then go to sleep under the stars in Muzdalifah, before they slaughter an animal, cut their hair, shower, and throw stones at Shaitan.

The concepts are simplified, but told in sequential order of how hajj is performed with very little commentary or embellishment.  The lines rhyme, so there is some creativity thrown in to keep the pattern and facts in line.  The font size, spacing and overall presentation of the book is good for reading at bed time or in small groups. 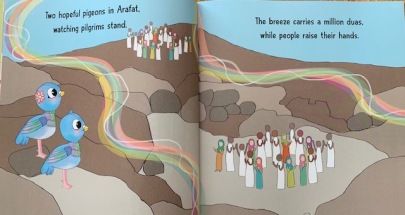 The best part of the book, are the pictures.  They are sweet, colorful, and engaging and to find out at the end that they are done by a 12 year old girl is an extra added bonus. 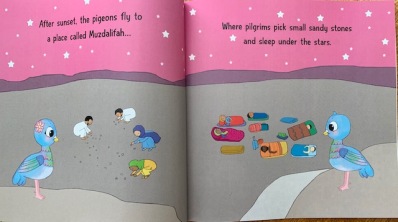 The book is factual in the steps for hajj, but because it doesn’t have a glossary, or give much information about why Muslim’s perform Hajj or details about the different acts of worship, it probably is better suited for Muslim kids that will hopefully know some of the answers, or have access to an adult who can answer and fill in the blanks.

Overall, a good addition to books about Hajj to share with your little ones.  I just wish it would have come out a little bit earlier, as the Hajj starts in a few days and the book just came out.  If you can’t find it this year, inshaAllah get a head start for next year as I think the book has staying power and will be read more than once as both a learning tool, and fun book requested by kids.

Its surprising how few books about Umrah there are for children.  As a religious act that many children are included in, there really should be more, but alhumdulillah this fun one exists, and conveys the steps of Umrah in rhyming fashion for ages 4 and up.

Told from a little boy’s perspective about his family’s journey, a little history is given, before the major parts of Umrah are explored.  The book prefaces the story with a note to parents and teachers making sure they know the book is a semi-fictional narrative meant to reinforce learning, it isn’t a comprehensive guide. 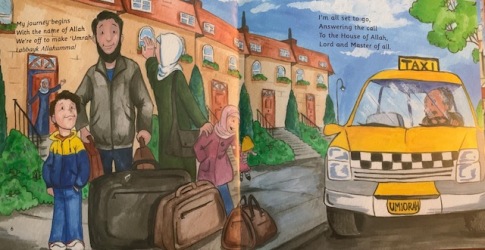 Full page pictures with four line stanza groups detail the steps about the journey and flight to Mecca, including defining and using the arabic words for the talbiyah, putting on ihram, crossing meeqat and praying rak’atayn.  The step-by-step approach is warm and exciting, as the pictures show smiling faces and the words balance information and enthusiasm of being in Mecca for the first time.

Details about praying, rich and poor, side by side are included, making tawaf, seeing the black stone, seeing Maqam Ibrahim, drinking Zamzam water, a bit of history about Sa’i, and the little boy feeling tired going back and forth between Safa and Marwa are all given in a well paced narrative that is neither rushed, nor overly forced (just a little to keep the rhyme scheme :)).  The steps of Umrah conclude with the family members getting hair cuts and then a quick trip to Madinah.

There is a glossary at the end of the 32 page book, that is nice for older kids, or as a way to reinforce words used to describe the journey.  I think the strength of the book is really that it shows what to expect during Umrah.  Children about to go will benefit from the mapping of the events and getting a heads up on what awaits them.  Children that have gone will have a handy way to remember what they did.  Children learning about Hajj perhaps, will be able to see how Umrah is shorter and be able to see what the similarities and differences are in a simple manner.  Even children who have no connection yet to Umrah will benefit from the vocabulary and excitement shared in the story.  While the story is aimed at younger kids, even middle elementary age kids will enjoy reading it once or twice. 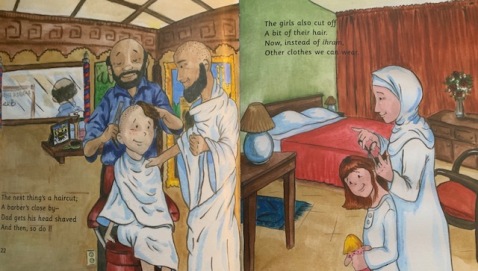 The book claims to come with a poster and paper dolls to reinact the steps of Umrah, but I purchased my book second hand and they weren’t present.  Hence, I didn’t comment on their quality, but it sounds like a wonderful supplement to the book.