Every few years a new Bismillah board book comes out and while after a while they all blur together, this new 2022 version is bright and colorful and at 24 pages a good length to show and teach toddlers when to say Bismillah without boring them.  At this age repetition is key, so while there is no real story, the book highlights familiar activities through the character Maryam and stresses saying Bismillah before you begin them. The book concludes with sourced duas to say when leaving the house, starting a meal, entering a bathroom, and before sleeping, and every morning and evening. I do wish the book would have clearly established that you say Bismillah, before starting anything and everything.  It hints at it at the end saying, “throughout the day, remember to say Bismillah,” but I worry that some kids would take it more literal, that you only say it at the times mentioned in the book, and not that the featured scenarios are just examples. 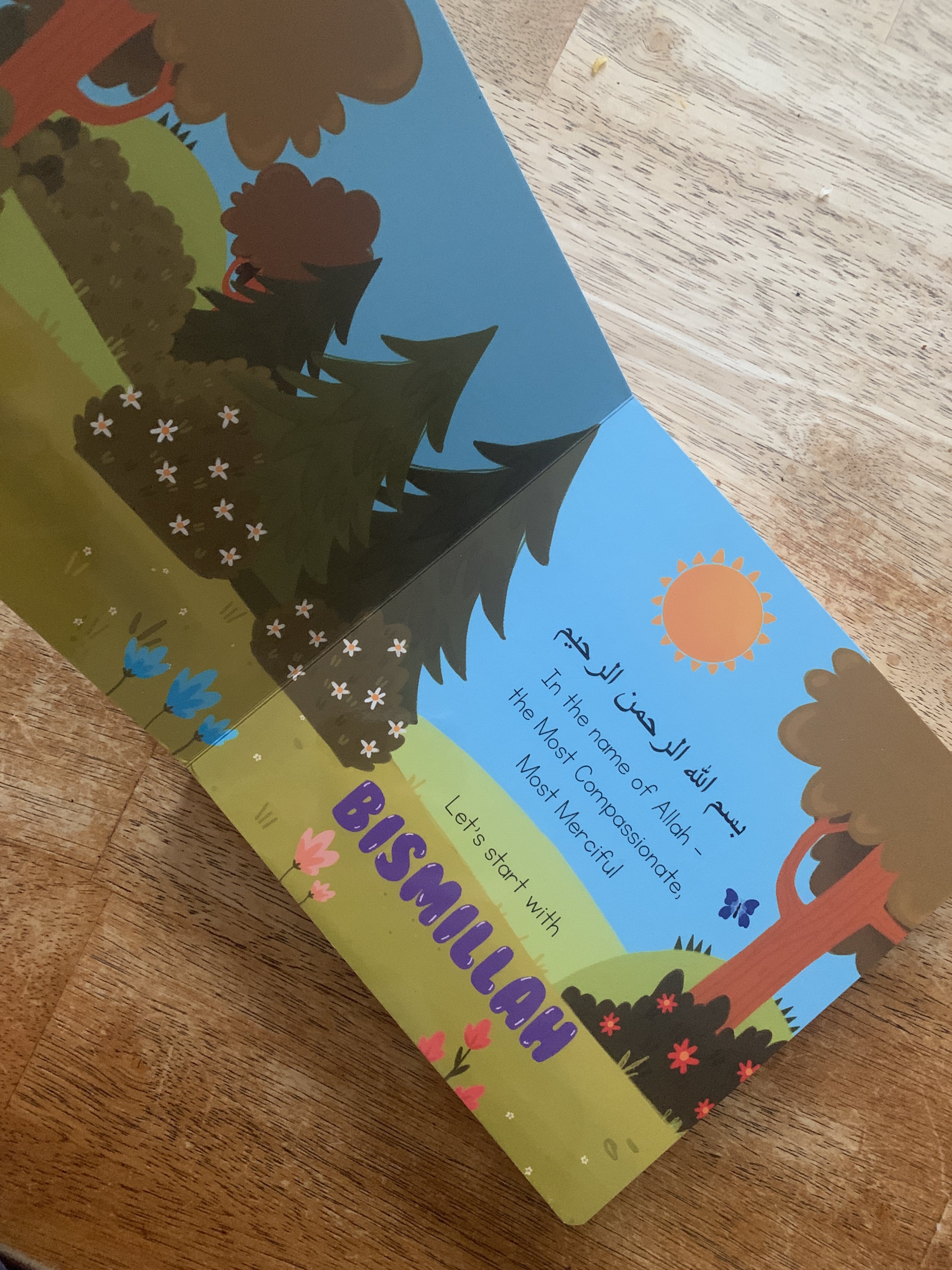 The book begins with Bismillah in Arabic text and the translation before starting the format of Maryam doing something on the left page spread and the saying of Bismillah on the right. So, “Maryam likes taking walks with her day,  When they leave, they say Bismillah.” In this manner Maryam takes the readers to play at the park, eat a meal with vegetables, drink a drink after her meal, read a book, wash before prayer, and get ready for bed.

The faces of Maryam and other people are never shown, the stuffed animals in her room do not have eyes, although the duck bouncy seat at the park does.  The illustrations are blocky and colorful with the text clear and large.  The duas at the end tell when to say the dua, the dua in Arabic, the translation in English, and the source.

For where to purchase the book you can visit the publisher’s website: www.litfancyhouse.com

Another adorable board book teaching the concept of saying Bismillah to the littlest Muslims. The illustrations are really sweet, and the text large and playful on their 5.5 square pages.  The story is simple, but because there is a story, and the word repeated, it does just what it intends to do and shows Bismillah being said before you start something.  It is worth noting though, that it never articulates why you say it.

In this 20 page story brother and sister, Nabil and Noura are about to eat some yummy cupcakes.  Noura forgets to say Bismillah and her brother Nabil reminds her.  They both say Bismillah and then Noura says it before she drinks her milk.  Proud of herself for remembering, Nabil praises her as well, and they both head off to play after saying Bismillah again. 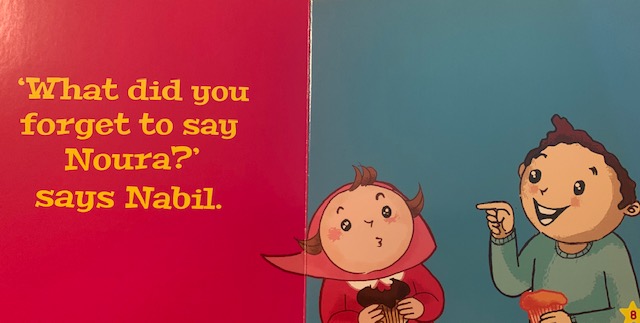 I like that the siblings encourage each other and no one gets in “trouble” for not saying it, but rather they are gentle in their approach and it comes not from a parent or authority figure but from one another.

There are a few “games” sprinkled in on two of the pages: say the colors of the cupcakes, count the cups.  There is also the word Bismillah written in Arabic at the end along with the English transliteration, English meaning and two questions: can you say Bismillah, and when do you say it, to verify comprehension.

Thanks once again to Crescent Moon Store (www.crescentmoonstore.com) for their fast and friendly service and great prices.  There are four books in the series and they carry them all. 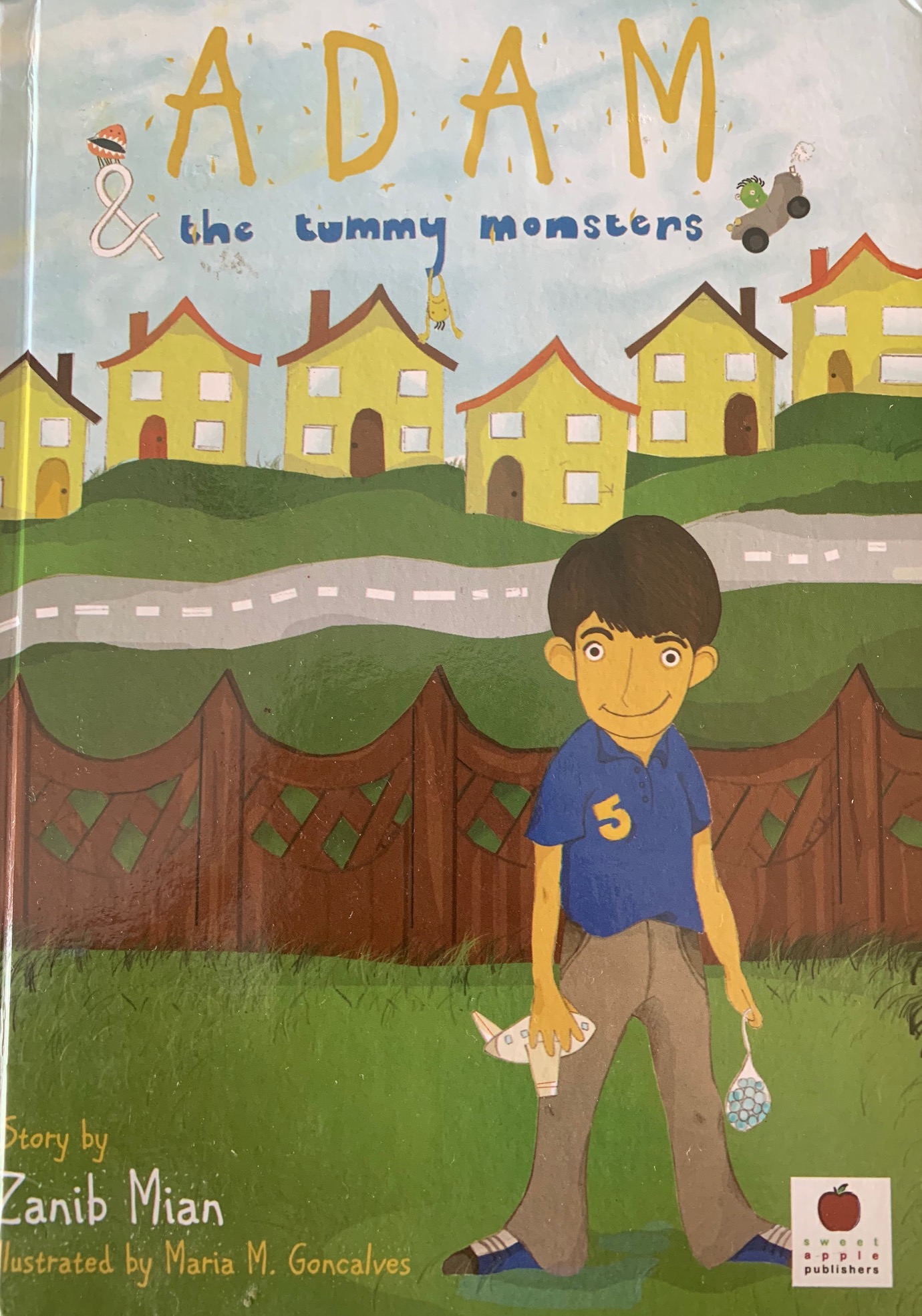 Book two in the Adam Series was the first Zanib Mian book I ever read, and for the last three years I’ve been looking for the first book.  So, while thrilled to finally find it secondhand in the US, I realize my review of it is a bit selfish.  I’m hoping that if it appeals to you that maybe we can encourage the author to re-release it somehow or write more books in the series, I’m not entirely sure how publishing and copyrights work, but I feel like it is worth a shot.  There aren’t a lot of early readers with Muslim characters out there, let alone ones that are done well.  The book is 32 pages, hard back and is would work for 5 year olds and up that know their site words and are pretty fluent at sounding out new words. Ideally, kids that have had the story read to them a few time will be able to pick it up faster, as the story is compelling, the spacing between lines and the variety of fonts will hold their interest, but some pages do have a lot of text and some words are a bit complex.

Adam has a tummy ache, aka tummy monsters, and while he doesn’t want “yucky medicine” from the doctor, he is happy when his dad, puts on a silly hat and assumes the role of “Detective Doodle” to solve the case.  They determine that he ate porridge for breakfast, but so did Adam’s sister and brother, who are feeling fine, so that can’t be it.  He washed his hands before eating, and said “Bismillah” before he started too.  It seems he followed all the eating rules, but when Adam’s sister Mariam stumbles on a scene in the playroom, the culprit is uncovered.

I love that the family has a silly approach to a very common childhood problem.  I also love that while, solving the case, reminders about eating etiquette are sneaked in without being preachy or cumbersome.  Once the reason for the tummy ache is uncovered, Adam’s parents don’t scold him, but it is safe to say he probably learns his lesson.

The pictures are engaging and colorful.  The mom wears hijab, and the characters are warm and happy.  The background color of the pages changes and sets a nice tone for the book.

In the text, Adam isn’t asked if he said bismillah, but rather if he said, “in the name of God,” but in the illustration, a speaking bubble has him saying bismillah, which makes me wonder if the author was trying to make the book accessible to both Muslims and non Muslims alike.  It definitely could be, I think the story is fun and the consequences for gorging on chocolate pretty universal. 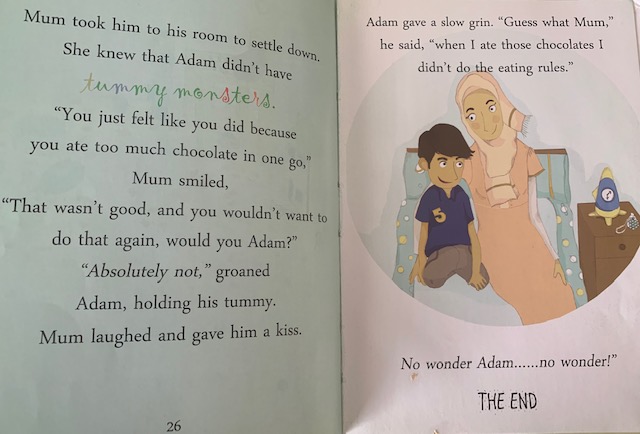 Like the second Adam book, this book will work perfect for story time in small groups  and bedtime on repeat.  I think in a classroom it would be great to have small groups read the story and then discuss.  Not a traditional Book Club, obviously for the length of the book and the target audience, but I do think that even little kids will have a lot to say about Adam and his silly family.  More importantly, I think they all will have stories of their own “tummy monsters” to contribute and discuss.