I honestly don’t know how I feel about this book.  I have read it and reread it and thought about it and read it again, and ignored it and read it again, and alas I have no idea.  I really am having a hard time articulating my thoughts on this 40 page children’s book.  I think part of the problem is that I’m reading it shortly after reading another “religiously inclined” clothing inspired picture book for the same target demographic and I’m having a hard time not comparing them.  When I intentionally start to write a review that doesn’t compare them, I am cognizant that my readers probably will and the review spirals.  So I’m going to establish what I love about this book, and then highlight why I’m torn and leave it to you all to draw your own conclusions and opinions.  InshaAllah this will not be the new norm, I will not make a habit of straddling the fence, but for this book, I think it is the only way.

I absolutely love the illustrations.  The warmth and joy the pictures portray are endearing and smile inducing.  I love the mother and daughter relationship and how feelings are not dismissed or belittled.  The mom connects the little girl to a legacy of strength and conveys her confidence, that the little girl is similarly brave, not just when things are hard, but especially when they are.  The little girl is shown to “feel” confident and joy in her clothing, not just “look” pretty, which is messaging that I love.  It is never too early to show that how one feels is more important than how one looks.  This depth, is not examined, but by simply using the words “When I put it on, I feel like a dainty seahorse,” rather than saying, “I look like a dainty seahorse,” the priority is not lost on the reader.  I like that the character has growth and challenges and has to reaffirm her position and as a result raises herself and those around her as well. 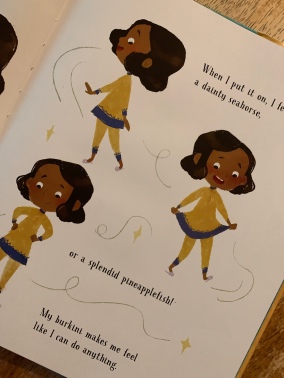 So why some confusion you ask.  Well- the word burkini is used to explain the little girl’s new swimsuit.  Burkini traditionally is a Muslim implied modest swimsuit, derived from combining the words burka and bikini.  That said, anyone of any faith can order a burkini online and their faith is not a factor.  The little girl is young and doesn’t wear hijab, her hair is not covered.  The mother and the ancestors pictured wear hijab, but Islam or Muslim is never in the text.  Part of me likes this, people wear modest swimwear for a lot of reasons: comfort, religion, sun protection, personal preference.  Similarly for head coverings in a pool some people where them for hair preservation, modesty, hijab, aerodynamics, speed, preference, comfort, etc..  Unlike hijab which is in the Quran, birkini is not an “Islamic requirement.”  No one is forcing you to swim, no one is forcing you to wear this brand or that style if you choose to swim.  Covering and wearing modest clothing is a must on Muslim women, covering the awrah is required after puberty.  I both like that the little girl is covering up and wish that it said why she is, but also appreciate that it is left open.  I like that you should be able to wear whatever you want and be comfortable with it.  I like that you don’t have to conform, and you can be you and whether that comes from a religious rationale or a fashion one or a health one or a comfort one, it doesn’t matter, don’t police what women wear.  But the implied illustrated framing is Islamic and the link is not there in the text.  See why my thoughts are scattered. 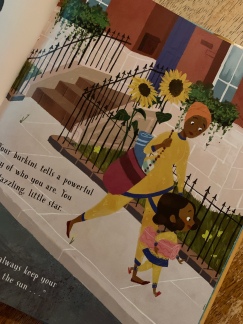 Similarly, the term “mermaid” is gender specific.  But colloquially it is often used to just describe someone with a human top half and fist tail.  So, isn’t “mermaid girl” redundant? At the end when male presenting Sam asks if he can be a Mermaid girl too is it implying gender neutrality? Is it like female kids saying they want to be a girl policeman or a lady firefighter?  Does it matter?

The story starts with Heba and her mother looking at photographs of past generations on their wall remarking how they are all mermaid girls.  Heba has gotten a new swimsuit, and her and mama are going to match in their new burkinis.  When they get to the pool however, all the excitement is pushed back on when her friends ask her if she can swim in that, and they tell her it doesn’t look like a real swimsuit. Heba sticks up for herself, but when she looks around, she sees, they are right, she doesn’t look like everyone else.  Mama reminds her of those before her and reassures her that she is not alone. She rejoins her friends, doing all the things she wants to do, and by the end they too want to be mermaid girls.

There is music depicted and women in one and two piece swimsuits.  As someone who wore modest swimwear my whole life, this book had a lot of mirroring of summers arguing with life guards, showing up with other Muslims at public pools to rude comments and aggressive stares, and swimming all over the world to people asking where they could get a suit like mine as well.  Definitely normalizing swimwear that looks like a burkini is a great concept to see in a book.

I do wish there was backmatter.  Perhaps giving voice to the many reasons women should be free to wear what they want at all times, but how particularly in water activities it has become a political point of judgement and policing.  Perhaps something about how this little girl is wearing it for religion and modesty, but that people everywhere wear things for lots of reasons.  I like the ambiguity, but also wish their was more of a connection to Islam/Muslims.  I leave it to you to make your own decisions.  I found my copy at my local library, it is mainstream published and can be purchased here as well.

This sweet, well-done 48 page picture book for early elementary aged readers shows the fear associated with being in a new place, the love of an elder family member, and the courage it takes to make new friends.  The story focuses on a young Pakistani girl who has recently moved to a new country and how she tries to remember the wisdom of her Nani to blossom in her new home.  The culture rich story is universal and lyrical, with hints of making duaa, greetings of salam, and the soothing sounds of the athan that make memories of home so foreign to her in her new residence. Young readers will empathize with Maya, and see the symbolism in the seeds she is anxious to plant and cultivate.

Maya finds her new home unfriendly and cold, she feels different with her food, and clothes, and way she speaks.  Home to her is dancing in the warm mansoon rains, saying As-salamu ‘alykum, and waking up to the sweet athan.  Nani was also there, her old home.  Sweet Nani with her hundred wrinkles, smelling like flowers.  When Maya left, Nani gave her a gift.  Little seeds of promise, so that they and she might bloom where planted.  But Maya doesn’t know where to plant them, she carries them with her everywhere she goes, but like a secret, she keeps them close.

Channeling her Nani’s tenderness, she knows that she has to plant them if one day she wants to be surrounded by flowers.  Maya loves flowers, dancing around them, praying among them.  Maya finds a patch of earth.  She longs for rain, she hopes for warmth. She makes way for the rays of the sun.  The text talks of flowers, the illustrations show both the plant and the growing friendships.  For days nothing happens, with the seeds or the classmates.  But Maya remembers that seeds have a long journey from the ground up. 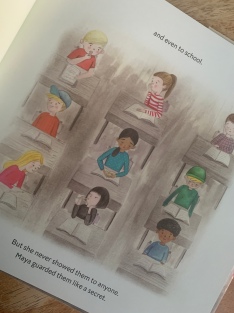 Maya nurtures her seed, just the one she dared plant, with love and kindness.  She too feels ready to burst.  Can she be brave enough to plant all the seeds, can she share them, and her self in her new world? Can their be warmth here, like there was over there? Can this too be home?

I love the symbolism and juxtaposition of the seeds growth with her own.  The character arc and the transition of home being one place to being the other, is very well done, older readers will feel an aha moment when they grasp it and younger kids will enjoy both the surface story and the dialogue you can have with them about blossoming where planted.

Religion is not a strong thread, but Islam is present in her memories of her maternal grandmother and all the warmth and love that those memories contain.  I love that the classmates were never mean, they just didn’t know her either.  I wish there was a bit more diversity of skin tone and mobility in the classroom illustrations and the friend circle she is hoping to join.  Overall, a beautiful OWN voice picture book that will be enjoyed for multiple bedtime, small group, and classroom readings.