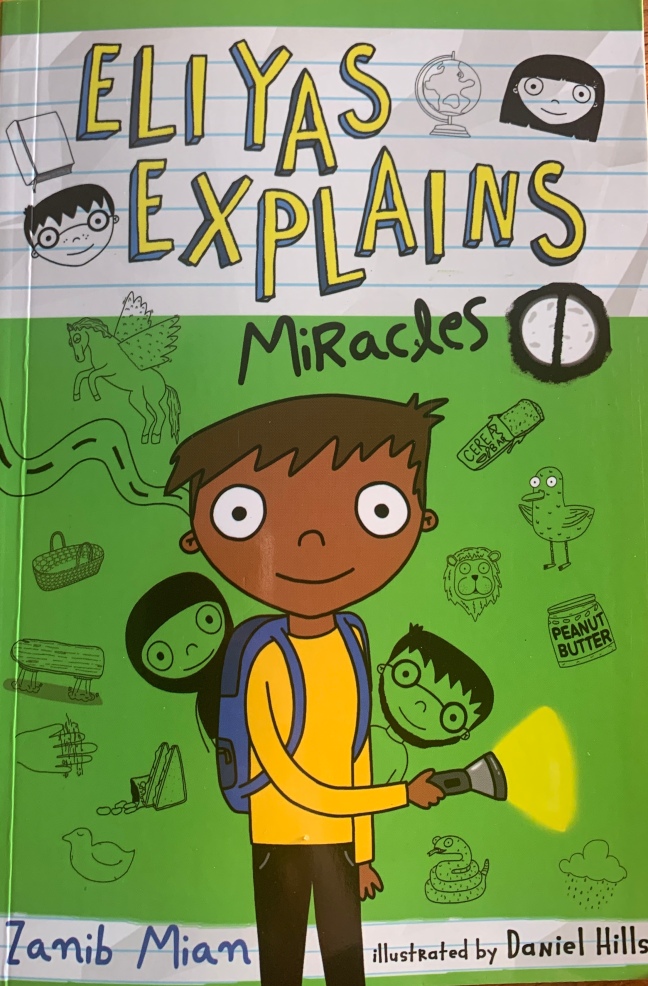 It is quite remarkable how my standards and expectations have grown and evolved.  I anxiously have waited for the next book in the Eliyas series, having loved the Angels book that came out nearly two years ago.  Zanib Mian’s voice makes the reading of nearly all her books enjoyable, whether it is a fictionalized tale or an Islamic knowledge book with fictionalized framing.  This book disappointed me however, because I now expect and crave references and sourcing for books that present facts or at least qualified and named scholarly approval to be mentioned.  I also was not comfortable with the depiction of Buraq on the cover, on a full page illustration within the book, and on the back cover.  The text itself is lovely and informative, and nothing “seemed” off factually in this 92 page early chapter book, but the lacking reassurance of the content contained within prevented me from truly loving the book.

Eliyas has finally convinced his family to go camping.  With a late start and a lot of chaos they will have to set up the tent in the dark, alhumdulillah there is a full moon out.  As they drive to their campsite and marvel at the moon, they begin to discuss the miracle of the moon being split in to two.  As they find a place to settle, they discuss miracles about water, as they collect firewood they talk about the tree where Rasul Allah gave khutbahs from crying when he moved to give the khutbah from elsewhere.

The family of Eliyas, his younger brother, older sister and parents learn and discuss the miracle of the Quran, Prophet Dawud and Prophet Sulaiman peace be upon them both speaking with animals, Buraq and the night journey, Prophet Ibrahim (as) being in the fire, Prophet Musa (as) dividing the sea amongst other things, Prophet Isa (as)’s ability to heal the sick and with Allah’s permission breath life in to a clay bird, and the she camel miracle of Prophet Salih (as).

The camping trip, the siblings bickering and then helping one another, and Eliyas having to admit to forgetting the food, all tie the miracles together in an easy to read and engaging manner.

I really love Zani’b Mian’s books, and I genuinely hope that she will consider removing the illustration of Buraq and having the miracles sourced, or the book “approved.”  Kids will read this book over and over again, long after they have grown out of the early chapter book demographic and inshaAllah it will inspire deeper knowledge to be sought.

I love the quiz at the end-with answers, playful fonts and doodles throughout the book, the short chapters, and relatable banter between the characters. 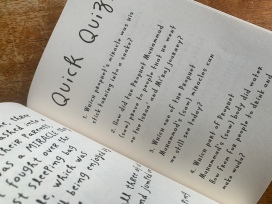 Even with the depictions it could possibly be used as a read aloud story to first and second grade and up.  If you were a teacher or in a capacity to read the story to the students, so that they might not dwell on the illustrations, the book could be shared.  For reassurance, have someone more knowledgeable than I verify the miracles shared for accuracy though, before sharing.

This book, like so many of the books I review was purchased from http://www.crescentmoonstore.com and no I do not promote the store because it benefits me in any way, I just really the store, the service, the selection, and the prices. 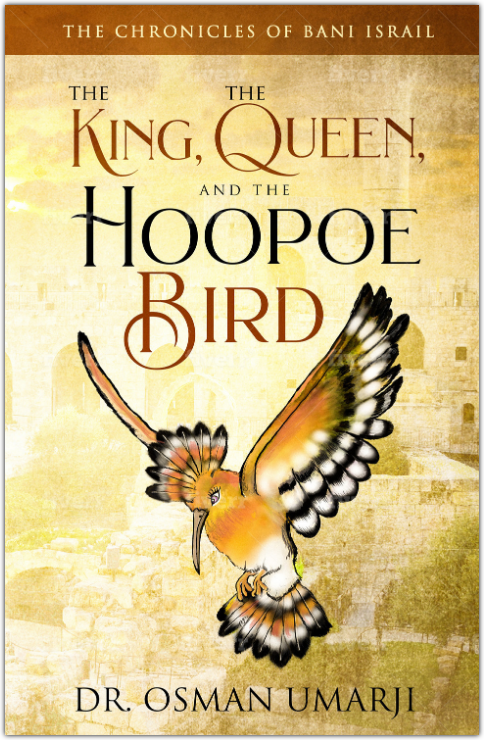 At 134 pages the fictionalized retelling of Prophet Sulaiman’s (AS) kingdom and interaction with Queen Bilqis comes to life from the point of view of a Hoopoe bird.  The book is marketed as a “Quranic fantasy adventure,” which I found a bit misleading.  The book is rooted in Quran and Hadith facts according to the author, and colored in to try and tie a story together, but even for 3rd and 4th graders I don’t know that there is much adventure or suspense.  As a prophet story it is pretty solid, but as an adventure book it seemed a bit scattered in its attempts to give history, draw in unrelated anecdotes and make it seem intense, when the dialogue suggested otherwise. 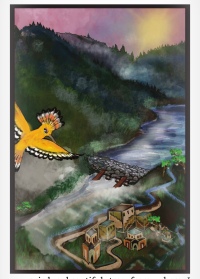 The book starts with the narrator setting the stage to tell his story of being in Prophet Sulaiman’s army nearly 3,000 years ago in the land of Sham.  Told in first person and  limited to what he saw, the Hoopoe bird (Hud-hud) addresses the reader and begins his tale.  He first gives some information about Hoopoe birds and Prophet Dawud (Prophet Sulaiman’s father), before lovingly describing Jerusalem and how the Bani Israil came to the land of Sham.

The first real glimpse of what kind of ruler Prophet Sulaiman is, is given with the detail allotted to how he repaired Masjid Al-Aqsa.  The bird then tells of Prophet Sulaiman’s many powers and gifts from Allah (swt), the ability to control the wind, control liquid metal, speak with animals, and of course the Jinn.  Slowly, the reader begins to understand how impressive Prophet Sulaiman’s kingdom is, not just by being told, but being shown, so to speak, and reminded pointedly by the Hoopoe that despite so much power how humble towards Allah swt, Prophet Sulaiman remained.

There is a tangent about his love of horses, before the Hud-hud takes center stage again as a spy in the powerful army of men, jinn, and animals. The story of the ants is shared and about half way through the book it is on one of the bird’s scouting missions that he sees a Queen and her people worshipping the sun.

The back and forth between Prophet Sulaiman and Queen Bilqis as Prophet Sulaiman urges the Queen to allow her people to worship Allah or risk invasion is a familiar tale and one the author asserts he tried to use only Islamic sources to include.

The book ends after the Queen has visited, embraced Islam, more anecdotes about Prophet Sulaiman’s wisdom are shared and how even in his death he attempted to show the doubting people the power and oneness of Allah swt.  The revelation of the termite breaking his walking stick and the retirement of the bird who had lived a most wondrous life, conclude the story before an Author’s Note at the end of the book.

I love Prophet stories and especially ones that are easy to read, memorable, and factual.  I think the book does a decent job in a fictionalized retelling of getting a lot of the important information in, albeit sometimes a bit forced, but keeping it on level for upper elementary and being clear and concise.  I didn’t stumble on grammatical mistakes or find parts confusing, it was well told and presented.  More than once in the book, I felt like it would have made a better oral story than written one.  The bird had to articulate how he knew stuff if he wasn’t there, and he kept asking the reader questions or telling them to pay attention.

The book is meant for Muslim kids and I wish there would have been footnotes or sources.

The illustrations were nice, they are full color but I am admittedly bias as I grew up writing letters to the illustrator who was my penpal for a few years.

Doesn’t fit my book club criteria, but definitely think kids would benefit from reading the story and discussing how the author shared the information, what they think the Hud-hud’s life was like and then maybe trying to retell a story of their own from a different perspective.