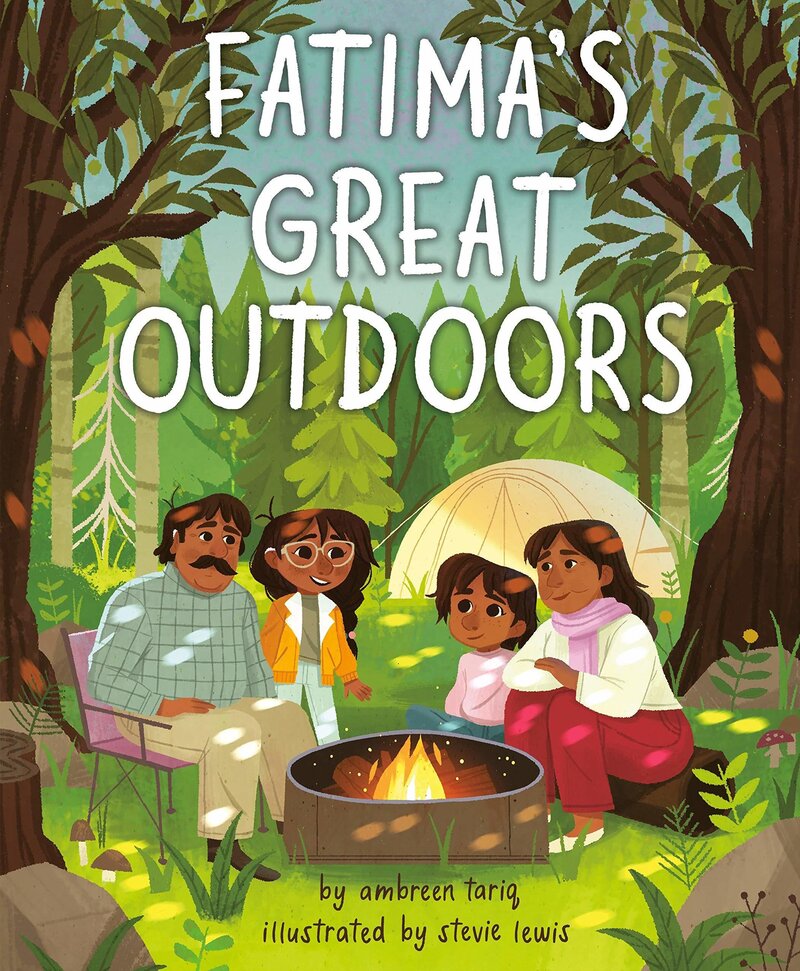 As a partially brown person who enjoys camping and does it frequently, I have been anxiously waiting to get my hands on this beautiful 40 page, kindergarten to fourth grade picture book. So, trust me, I’ve read it multiple times to myself, to my children, and even to a Muslim storytime group to try and figure out why I like it, but, unfortunately, really don’t love it. Ultimately, I think it is because there is just too much going on.

Everything about this book is wonderful: the idea to encourage brown people to go camping, to highlight that time in the wilderness is for everyone and doesn’t have to look a certain way, that bullying and micro aggressions are oppressive, that immigrants have diverse and full lives in their home countries and work hard when they come to America, that culture and language and food and music is diverse, yet universal, that learning new skills and trying hard things makes you a super hero, that dad’s can cook and mom’s can be great fire starters and critter catchers, truly it is all so powerful and affirming, it is just a lot for one book.

It could easily be a three book series with just the information and layered themes presented, and I really wish it was spread out. If you are a 4th grade desi kid who has been camping or desperately wants to go camping this book is a great glimpse to mirror your place in the hobby without compromising your unique spin on it, but I think for anyone not in that demographic, many of the little celebrations, messages, themes, and cultural nuggets will simply be lost.

I wanted to hear the campfire stories and jokes, and laugh at the lyrics being belted out, not just told about them. I wanted to feel Fatima’s accomplishment at helping set up the tent and maybe see her struggle and rebound, not just be told she suggested reading the directions. The book has a ton of industry praise and personally came with a lot of expectation for me, so perhaps I’m overly critical, but kids in my storytime were struggling to stay focused when they couldn’t relate to the cultural touchstones being tossed out, they didn’t get the “not being good at math stereotype,” they needed the non text pictures to be explained to grasp their impact on the story, and they wanted to know why of all the Islamic things a Muslim family could do while camping, halal bacon was the only Islamic reference and came with precious little contextual defining.

The story starts with a Fatima and aapa waiting to be picked up after a terrible week of school to go camping for the first time. The Khazi family has immigrated from India and their father has told them that camping is an American pastime. During the week Fatima has been teased for her pronunciation and lunch, had her hair pulled and done poorly on a math test. But when her parent’s pull up with a packed car and the girls jump in to enjoy samosa and Bollywood songs, the weekend holds promise.

When they get to the campsite, Fatima and her dad tackle the setting up of the tent. Dad cannot seem to figure it out, and after the week she has had, Fatima is scared to help, but after a while she suggests looking at the directions and it seems that does the trick. The family enjoys shami kabab and rotis from home for dinner, before the girls climb in the tent.

A spider on the outside of the tent is magnified inside, and has the girls terrified it is a monster. Mom, the ever brave lizard and scorpion disposer in India reassures them that it is nothing and sends them off to brush their teeth before settling in for the night.

The next morning mom shows the girl the small spider keeping the mosquitos out and they all share a laugh while dad is cooking anda and roti on a gas grill. He calls the girls to come out in urdu to attempt a campfire to cook the halal beef bacon on like other American’s do. Dad and Fatima can’t get it to light, so mom, who is from a smaller town in India has to show them how it is done. Along the way Fatima looks at the other campers and is annoyed that they aren’t having trouble and that her family always is so different. The other families it is worth noting are white.

The Khazi family then starts to pack up and then they go for a hike, play in water and when the time to leave comes Fatima is sad. She doesn’t want to go back to the life they live where they are different and teased and her parents have to work two jobs each. But aapa suggests she share her fun at show and tell, and the family reassures her that they will be back.

The book ends with Fatima telling her class she is a superhero because she can build fires and tents and isn’t afraid of spider monsters. There is no glossary to define the urdu words used and spoken, but there is a reference at the end about the author’s @brownpeoplecamping initiative.

I think the book is rather remarkable and ground breaking because of its subject matter. The illustrations are wonderful, and the book a great reminder that camping and being outdoors is for all. I just wish it focused on a theme or two and highlighted them for this Indian American Muslim Family with relate-ability for other types of minority groups. The book set its own standard in what it wanted to achieve and convey, and sadly I think it missed the mark.