This picture book celebrating brown skin, particularly in girls, and specifically from a Desi culture point of view, takes on the notion of dark brown skin not being as ideal as compared to lighter skin.  If this is not a concept you are familiar with, I don’t think that the book will hit home, but as someone who has heard this refrain of staying out of the sun to not get darker since childhood, aimed at my friends and cousins (I turn red and burn in the sun), I do appreciate this owning and pushing back on a ridiculous colorist mindset. I don’t love the “magic” diction choice, and there is nothing Islamic in the book, save some covered heads that could be religiously inspired, or culturally, or even weather related, and I’m not sure if the author or illustrator identify as Muslim, but I’m sharing anyway because I know young Pakistani girls particularly, hear this colonial mindset messaging still, and I support undermining it.  This book is not about systemic oppression and racism and taking up space, this book is internal cultural acknowledgement of a pointless beauty notion.

A young girl begins the book telling of things she loves: trips to Pakistan to fly kites with her Dada, her mother’s dinner parties, swimming, climbing trees, but most of all she loves basking in the sun.  One day while playing with her friend Zoya in the warm sun, Zoya abruptly says she should go in before she gets too dark.  The protagonist counters that she loves all the shades her beautiful brown turns and equates it to magic.

She holds out her hand to show her magical brown skin shimmering, and connects the beautiful brown to the brown clay pot her Nani used to carry water in, the brown shawl her mother wore when coming to a new home, the brown of the henna her sister puts on, etc..  She says her brown skin has its own story of being proud, brave, courageous, soft, sweet, and fearless.

Zoya decides she likes the magic and decides to stay and bask in the sun. The author on the final spread raches out to brown girls to own, embrace, and celebrate their brown skin. 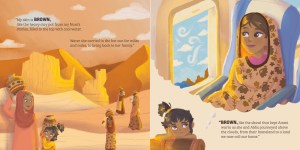 Another Scholastic published book that I genuinely cannot understand why the author forced a Muslim character to be a part of, and no it isn’t just a token hijab on a character named Fatima.  It mentions she goes to the mosque, there is a Quran on the book shelf, her parents don’t understand her obsession with monsters, she is desi, and there is Urdu in the text as well.  This isn’t me just doubling down on Halloween being a pagan holiday that I’m against, this book is about witches and magic and while it does take place on Halloween, and the witches are Good(e), it is their last name, it is a weird inclusion flex for me.  The book also has the Muslim grandpa crushing on the grandma witch, he even kisses her hand and they are revealed to be soul mates.  There is evil possession, different men that could be the protagonists father, killing, and a pageant.  The book has good qualities- positive body size messaging, focus on family love, self acceptance, and is fast paced and entertaining, but even as a parent that lets my kids read fantasy books, and books that mention Halloween, this book went too far for me.  It normalizes Muslims being ok with magic, it isn’t world building and fantasy, it is very much the real world with sihr characters and practices. It positions the parents as being loving when they come around to accept their daughter’s love of monsters, it also seems to normalize men and women relationships, and for a middle grade 224 page book I just can’t support a Muslim character’s role in such a story.

I know sometimes I’m ok with magic in books, this one just seems a bit intense, we might just have to agree to disagree if you feel differently, and I’ll own my possible inconsistency in the matter as well.

Adelaide is heading to her grandma’s house with her mom, and being dropped off for three months- abandoned is more like it. The family dynamic is stressed even on a good day, and today is not a normal day.  The Goode family of witches are all that remain of the witches in the town and more than three can not exist within town lines.  Additionally, if at least one witch is not always in Cranberry Hollow, all the magic will be lost.  Adelaide, doesn’t have magic though, toss in that she is a bigger girl than most other twelve year olds, and that she never feels like she is enough, and the bees within her are buzzing.

The plan was to drop off Addie and head out of town.  The neighbors, Hakeem and his granddaughter Fatima show up though, and before Candice can sneak out, she finds herself heading to the Cranberry Hollow Halloween Festival with Fatima, Addie, and her mom.  The town loves the Goodes, they help crops grow better, cancer to be cured, and so much more.  Of course they don’t know that they are witches, but they know that they are helpful.  When the time to leave arrives, Aunt Jodie stays on the other side of the town line and they prepare to say their goodbyes and keep the fourth Goode outside the imaginary line, but Addie in a last ditch attempt to make her mother notice her, pulls her mother back across and thus sets off the curse of having too many witches in the town.  The hated Hern family is going to be possessed, and Addie will be hunted come midnight on Halloween.

The book is intense and scary at times, just toeing the line of what a MG reader can handle, I just don’t get the Muslim character.  It really seems intentional and thought out, and I would love to find out why it was a conscious choice.  There is a small passage equating Addie standing out because of her size with Fatima and her hijab, but I can’t imagine that is enough of a reason to have a practicing Muslim loving Monster hunter in the book.  I know we want representation, but this didn’t work for me, and while I know others are ok with Halloween and some with sihr in a fictional sense, having a Quran on a shelf above the book of monsters and jinn that the Nana has collected, just rubs me the wrong way.  The book is published by Scholastic and will undoubtedly be in book order offerings and in book fairs, and if you are ok with it for your children, that is your choice, I just feel obligated to share my concerns so that you can decide what is best for your family.

Magic, witches, curses, killing, death, Halloween, crushes, romance, kiss on the hand, premarital sex not detailed (two options at least for who Addie’s father is), cigarette smoking, bullying, mention of a kid at the festival with two dads.

I wouldn’t shelve the book in an Islamic school library or classroom.  I would also pull it from a Scholastic Book Fair display at our Islamic school.