When I flipped through the book standing on my porch as the delivery truck drove away, I groaned a little internally at the simple illustrations, terrible font, large amount of text on each page, and the four fingered boy at the center of it all.  Alhumdulillah, I gave it a chance and ended up really liking it.  The book stayed with me, then I read it to my kids and it stayed with them.  Then I mentally made a checklist of all the teachable ways this book could be used in an Islamic school classroom, story time presentation, bedtime reading, and even just as a regular reference point.  This Islamic fiction book packs a lot of information in while connecting to religious concepts kids are most likely familiar with and silly points that will make five to eight year olds giggle. 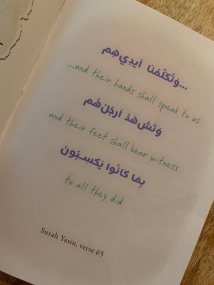 The book opens with verse 65 from Surah Yasin in English meaning of the translation and the Quranic Arabic.  The story then begins with it being bedtime for young Hamza and him running up the stairs to put on his rocket pyjamas. 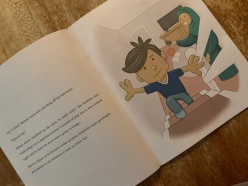 When he brushes his teeth he looks in the mirror and finds notes hanging all over addressed to him.  The first letter he reads is from his hands reminding him to wash them before he does anything and reminds him Prophet Muhammad (SAW) “said the best Muslim is the one who doesn’t harm others with his hands or tongue.”  It then mentions that the left hand doesn’t like carrying weight so use your body to ensure you get your book of deeds on the Day of Judgement in your right hand.

The book continues with eyes, ears, tongue, nose, and feet writing messages urging Hamza to cover his eyes when something inappropriate pops up on the screen, or protecting his ears from listening in on other people’s conversations.  Every point of how to act is connected to an ayat in the Quran or Hadith of Rasullallah. 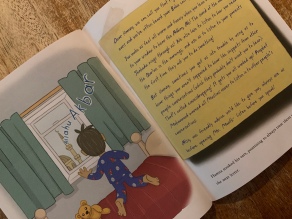 After reading the letters, Hamza makes wudhu, says a dua before bed which is shared in English, promises to take care of the body Allah swt has blessed him with and then asks the readers what their pyjama promise is.

The book concludes with pictures and captions of Hamza’s bedtime routine of brushing his teeth, reflecting on his day, making wudhu, reciting tasbih (SubhanAllah 33 times, Alhumdulillah 33 times, and Allahu Akbar 34 times), reciting Ayat ul Kursi, and sleeping on  your right side.

There are no sources in the book, but most seems “general knowledge” so to speak.  And for as preachy as the book may sound in my review, it really isn’t.  The character’s voice or rather the body parts’ voices are relatable and light.  I think young ones enjoy that they are hearing things they have probably heard before and making a connection to them being repeated in a new way.  Having your body parts talk is both silly and sobering as the target age group can imagine it happening.  It really reminds kids that their actions are seen and recorded, in a non scary or overwhelming way.

I look forward to sharing this book in library story times, masjid story times, and regularly with my own children.  The publisher is a Shia press, but I don’t think any Muslim would find anything controversial in the book (please note though I am not highly educated in these things). And while American’s may find the spelling of pyjama hard on the eyes, with the exception of that one word the book is not region specific or difficult to connect to for global readers of any age.