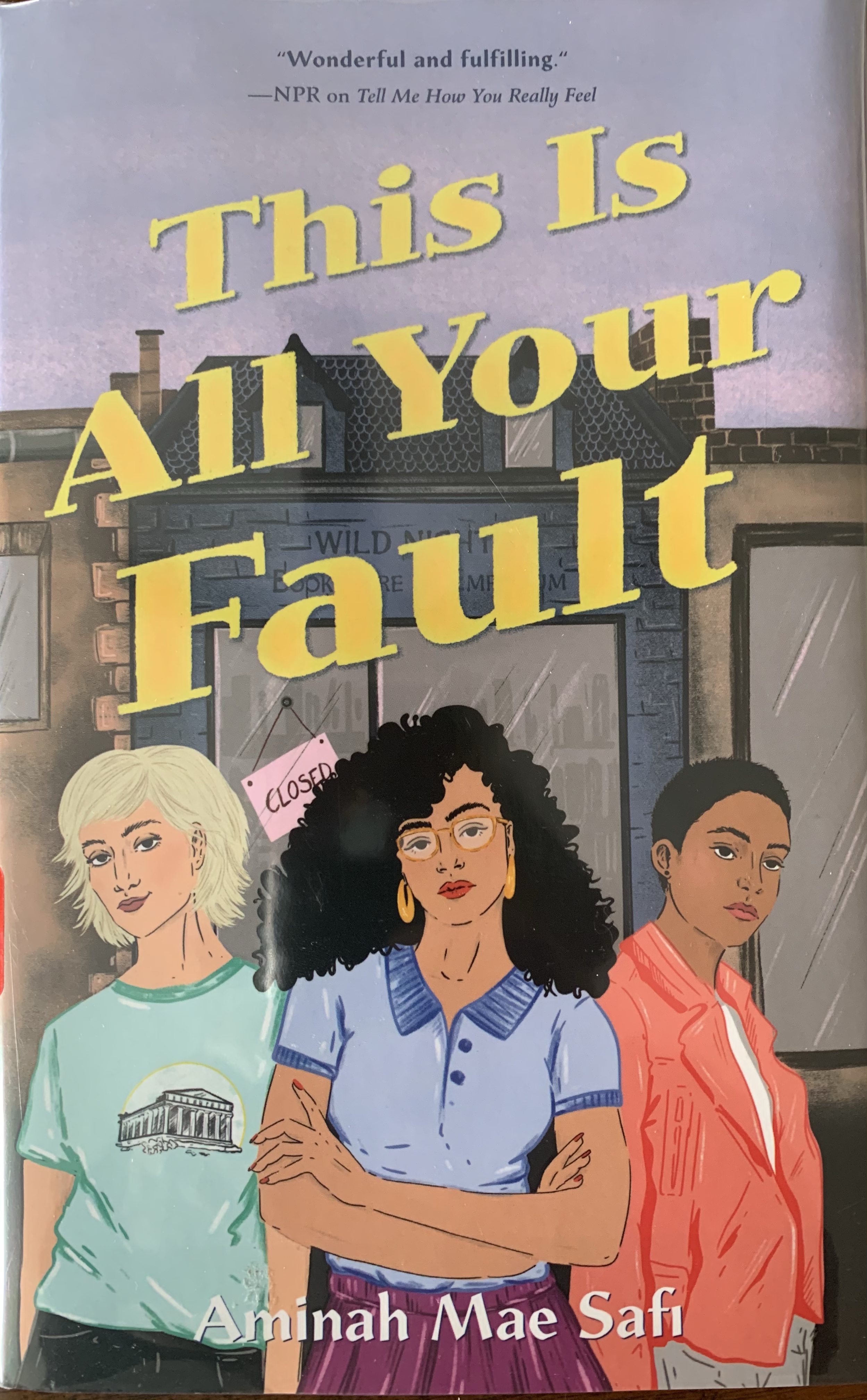 I wanted to give the author another chance to win me over after really disliking her first book’s writing style and characters and while this book is an easier read, I was shocked when the Empire Records inspired story really crossed over to me to being almost plagiarism.  I was a huge fan of Empire Records as a teen in the 90s, and can quote the movie, recall with little effort when Rex Manning Day is (it was yesterday), and know what is going to  happen at 1:37 exactly, so I was really excited to see what this Muslim author did with her spin of turning a music store in to an idie bookstore and focusing the story on three high school females. I wasn’t expecting the spin to be so minor though, and to still find an AJ and a Warren in the character list, a girl shaving her head, an employee dance party on the roof, a scummy celebrity, a celebrity assistant hinted at romance, a character deciding that today is the day to tell her crush how she feels, you get the point, it is remarkably similar.  If you haven’t seen the PG 13 movie, the book isn’t terrible, but it is very scattered with three voices, a lot of side characters- often random, and unresolved story threads, the book takes place in one day after all, I don’t know that it is really worth the time to read it.  There is straight and LGBTQ+ romance and break ups mentioned, a kiss, alcohol, vape pens, marijuana, sexual assault, some violence (slapping), a theft, language and one character has Arab parents and mentions Middle Eastern poets as well as likens the book store connecting people to the concept of an Ummah in Islam.  I can’t think of a demographic that I’d really recommend the book to, nor do I think that I’d ever read it again, the author’s writing style for me improved slightly but the characters are forgettable and the story un original. In terms of appropriateness probably high school readers, 14 and up.

Eli is closing up Wild Nights Bookstore and Emporium and accidentally opens the manager’s computer and accidentally logs in to her accounts and accidentally learns from her emails that the book store is closing in less than two weeks.  He then sees that the bank account is still logged in and finds a petty-cash account that has $9,000 and decides that he for once in his life is going to try and help out the store and invest in something to grow the money and hopefully delay the closing.  Unfortunately he buys nine grand worth of Air Jordan knock-off shoes, and is unable to return them.  The next day when the entire staff rolls in to work, bits of the story come out, some know the store is closing, others are sensing something is amiss when boxes are being unloaded that don’t contain books, and to top it all off a famous author is doing a book signing later in the day.

Each of the characters has something going on as well on this particular day, Rinn is going to tell AJ she loves him and use her influencer status to try and rally support for Wild Night,  Daniella is going to lift the veil on her secret poetry writing and share it, and Imogen is going to break up with her girlfriend of nine months and shave her head.  None of the girls like each other, and go out of their way to be down right nasty to one another, but eventually they come around, they support one another in the face of them losing their beloved store, and helping each other when one is sexually assaulted by the famous author.  Along the way the reader meets the quirky characters that come to the bookstore regularly, some that never leave, a manager who never seems to be there, and an owner with weird rules about technology in the store.

The climax is the girls stepping in to their own and becoming vulnerable to who they are to one another, the world, and ultimately themselves.  The book store isn’t saved in it’s entirety, but it isn’t lost either and the direction forward looks infinitely more unified than the crazy day the they all just had.

I like that the wave of nostalgia that hit me as I recalled the regular watching and quoting of Empire Records from my younger days, but that really was about all the book gave me.  I wanted to love the girls coming together to save the day, but they were really crass and rough and while I’m glad they did get to a place of tolerance, the transition wasn’t cathartic because their original irritations with one another didn’t seem justified.  The lack of character connection made it hard to cheer for them when they broke free from what they perceived was holding them back as well.  For example, I wanted to be giddy with nerves when Daniella stepped on that stage, but the emotion just wasn’t there.  There was a lot of telling, not showing, and with three perspectives, it was just stretched too thin.

I kind of like that Islam and the concept of Ummah was referenced at the end, but really only someone like me looking for it and piecing together the poets she mentioned, her one parent being from Lebanon and the other coming to America after the six day war would even take that conversation as being in sync with the character.  She might not be Muslim, she is a lesbian has/had a girlfriend, and it is a non issue.  Religion is otherwise not mentioned in relation to her or any other character.  A French Tunisian customer calls her habibti and says ‘Handulullah.”  I probably am reading to much in to it, old habits die hard and even after writing over 500 reviews, I still get so excited to see someone in literature possibly identifying as Muslim.

One thing that really stood out to me as a hole in the story was that it never said what Danny’s plan was,  just kept hearing that it was a terrible, awful plan.  That bothered me. The pacing is also off, to have all this happen in one day you would think it was all happening so quick, but then there are really long winded tangents about cell phone cases and grape soda.  At times it is such a time crunch and at other times everyone is chilling on the roof or in the alleyway it is no surprise there is not enough business.

Copied from above: There is straight and LGBTQ+ romance and break ups mentioned, kissing, alcohol consumption, a massive hangover, vape pens, marijuana, sexual assault, some violence (slapping), a theft, language. Nothing is really sensationalized though, the

Not even tempted to use this as a book club, or recommend others to do so.  There is no real literary or representation value, in my opinion. 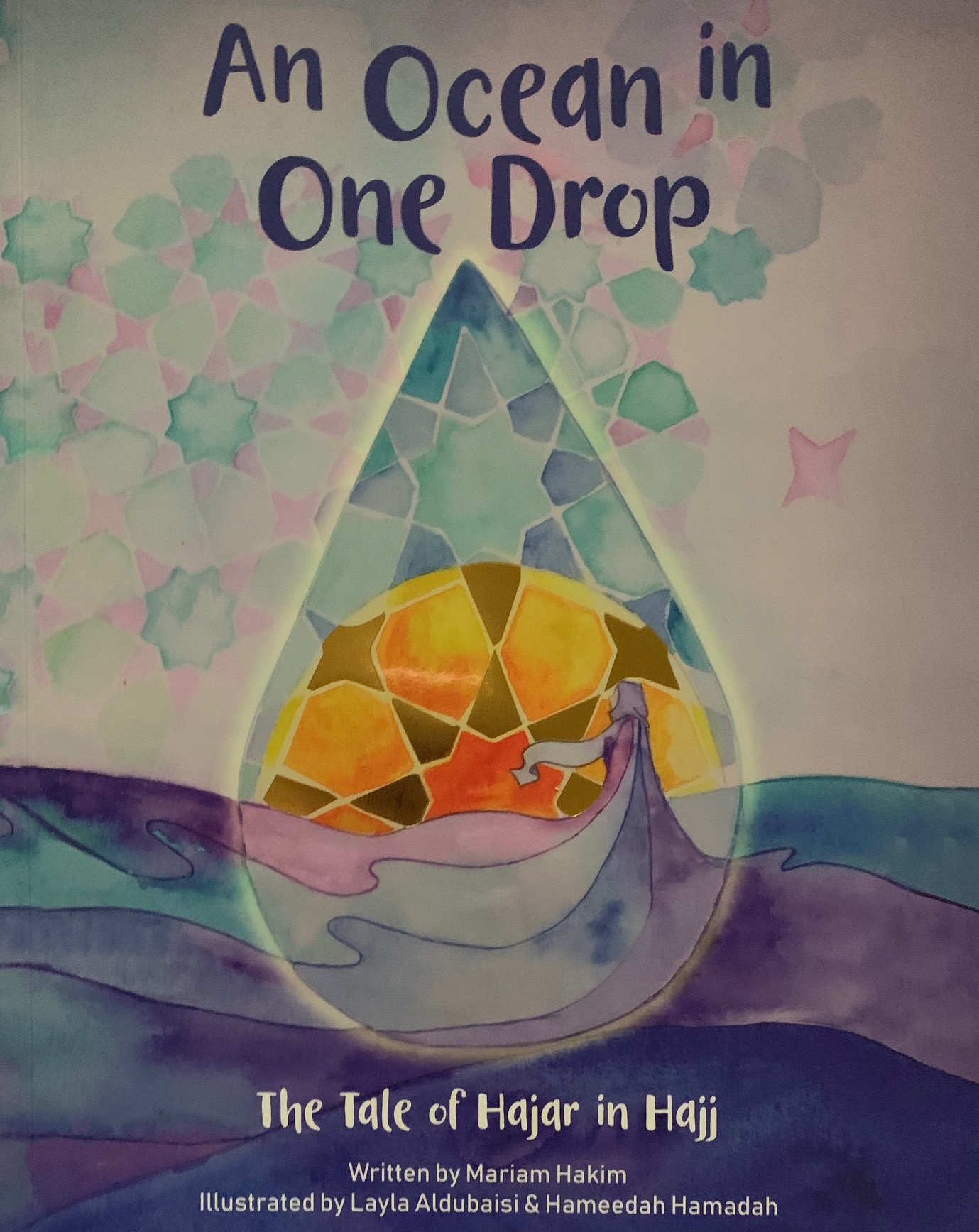 A story about Hajar (saa), about Zamzam, about Hajj, and how we are all connected through our faith in Allah.  In 32 water color adorned pages, the rhyming couplets tell a well-known historical story for children of all ages, with Hajar front and center.

The book is framed with a young girl, Jamila sitting with her grandmother who has just returned from Hajj.  She is giving Jamila some Zamzam water as she tells her the story of Hajar, and how at the heart of our Hajj we honor and follow in Hajar’s footsteps. 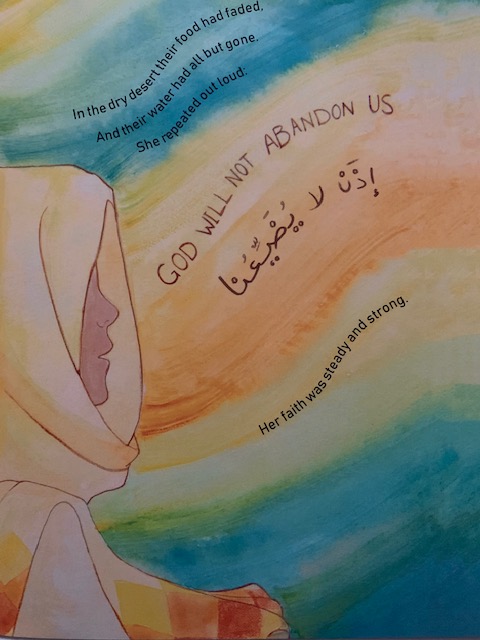 Left in the desert with her son Is’mail (as) she runs between two hills, Safa and Marwa looking for water and help. This step of Hajj, Sa’ee, is required by all pilgrims to perform as Hajar did. Grandma explains to Jamila, that after praying to Allah (swt) and after the seventh run, water appeared and still flows today, Zamzam. 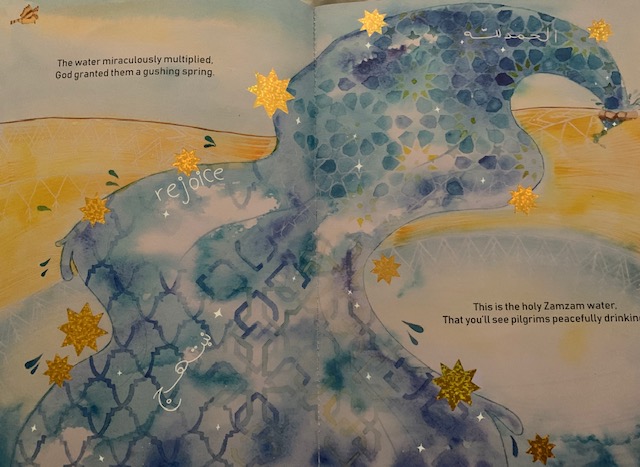 Jamila learns from her grandma the value of the water, and the power trusting Allah has in our lives.  She also learns how the well attracted people and is now the  city of Makkah.  “You see the sacred Sa’ee has many lessons within: Courage, patience, faith and love.” the grandmother tells Jamila before quoting Rumi and liking the desert water to an ocean of history. 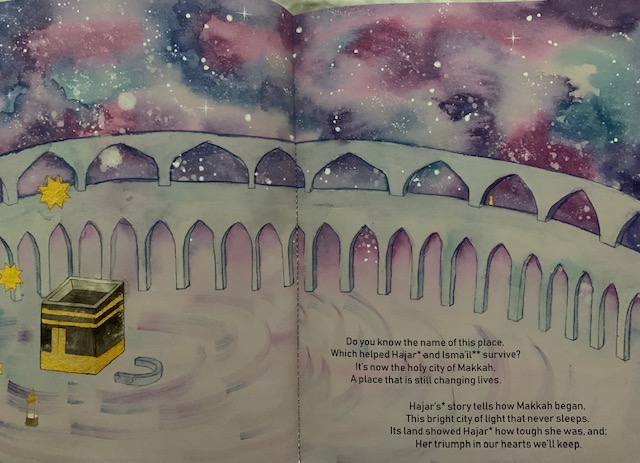 The book contains a two page Glossary of names and terms at the end as well as information about the author and illustrators.  As expected there is also an ayat regarding Prophet Ibrahim and his family from the Quran at the end, and somewhat surprisingly, Bible verses about Hagar.

I’m not sure that the link to Rumi’s quote and hence the title of the book is smooth, it seems a bit forced.  Also, I’m not sure why the Bible verse and the Bible entry appearing in the Glossary is present.  It seems like an Islamic story for readers of all faiths to know what Muslim’s believe, so I’m confused why the interfaith angle at the end is there.  Perhaps, if there was an explanation or an Author’s Note or a tie-in to the story, but without any of that, it seems inconsistent and random.

As far as the illustrations on the 8.5 x 11 thick soft bound pages are concerned, they are rather mediocre.  The anime’ style people, the texture, shimmery bits, and the flowing deserts, make me feel like I should love them, and there is truly nothing wrong with them,  I just wasn’t overly wowed by them.  I actually found the illustrations off for the story at hand.  I’m  certain everyone will disagree with me, and some really are gorgeous, but overall I found them collectively, to be just ok.