This 40 page picture book for preschoolers and up shows connection to family, memories, and Bangladeshi culture as a little girl explores the quilts made from her Maa and aunts’ worn out saris.  This book has been on my radar for a while and while there is nothing wrong with the slow and thoughtful story, it didn’t sweep me up in a hug and wow me, as I had hoped it would.  The illustrations are as critical as the words in conveying the message, and the illustrations are indeed beautiful, I guess I just needed more.  More connection to the emotion the little girl was feeling recalling the strong women in her life, more impact to the fact that her Nanu is no longer with them, and more understanding about the history of Bangladesh that seems to shape the memories.  I worry that most readers simply won’t get anything other than the surface level of the book, which is ok, the memories woven through generations manifesting in quilts, is tangible and perhaps enough.  I feel like, however, the framing of the story and the textless illustration pages attempted to add more layers to the story, and I think to anyone not Bangladeshi, those layers might not be understood.  I wish their was an afterward with notes about the pictured references, inclusion of such backmatter would really open the book up to a wider audience, and give the book discussion and staying power in my opinion.  If you are Bangladeshi this book will be a treasure I’m sure, and I’d love to hear your thoughts on it. 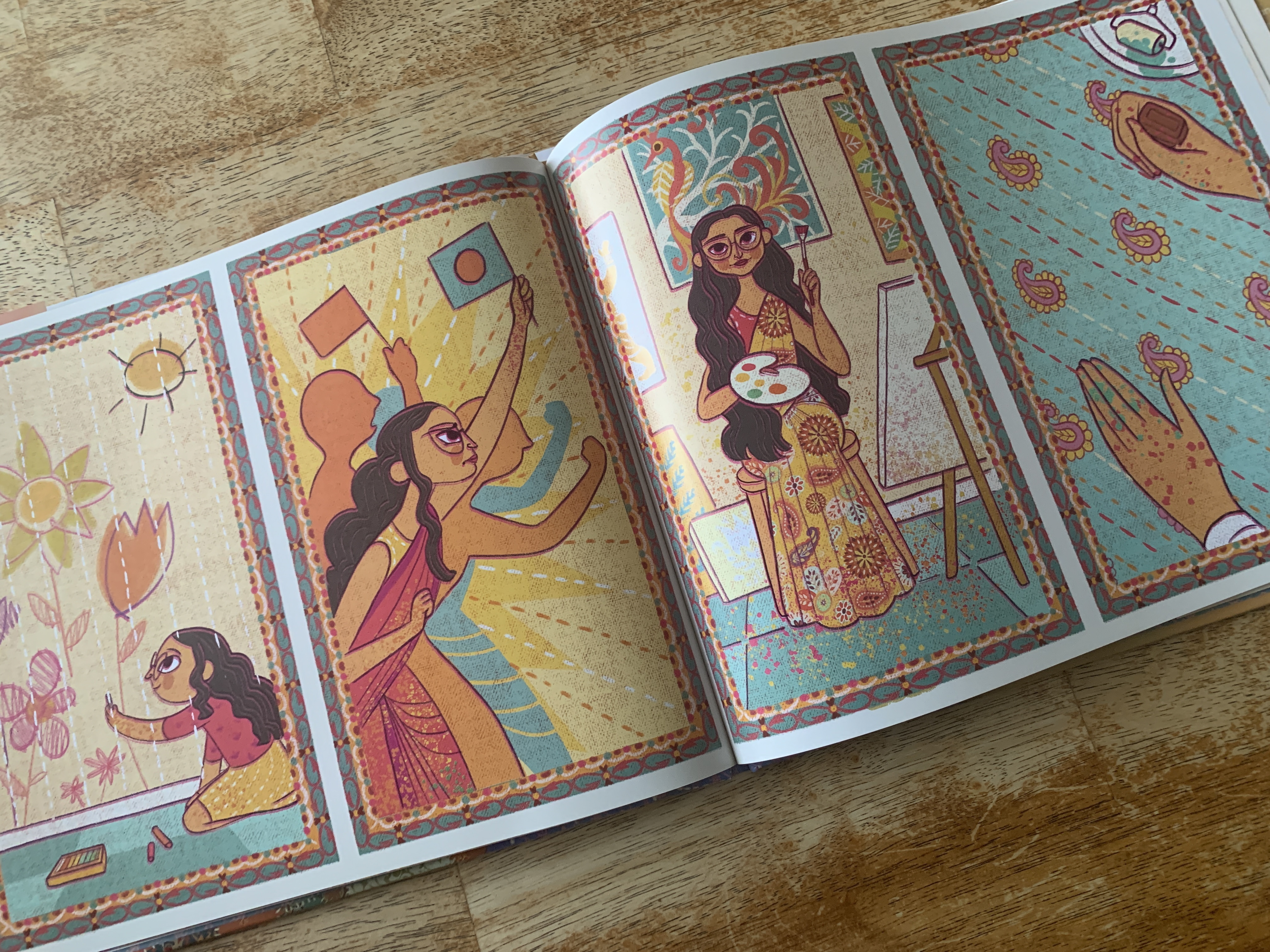 Asiya loves going to her Nanu’s house, there are treasures there.  Her favorite treasure is the katha chest.  An old trunk full of the quilts made from the old worn out saris of her Nanu, Maa, and khalas. She snuggles in their warmth and listens to the stories they tell. Stories of hardship, joy, skills learned, moves made, loss, death, love and family.

Boro Khala’s looks like Khalu’s medal, from a sad time when he was away.  Mejo Khala bright oranges and yellow like her fingers.  Shejo Khala’s is stiff and neat, she is never messy.  Choto Khala’s has a white streak like the white saris she wears since Khalu died.  Maa’s katha is patchworked and different than the others, and Nanu’s is paper thin and smells of tea, old books, porcelain and wood. 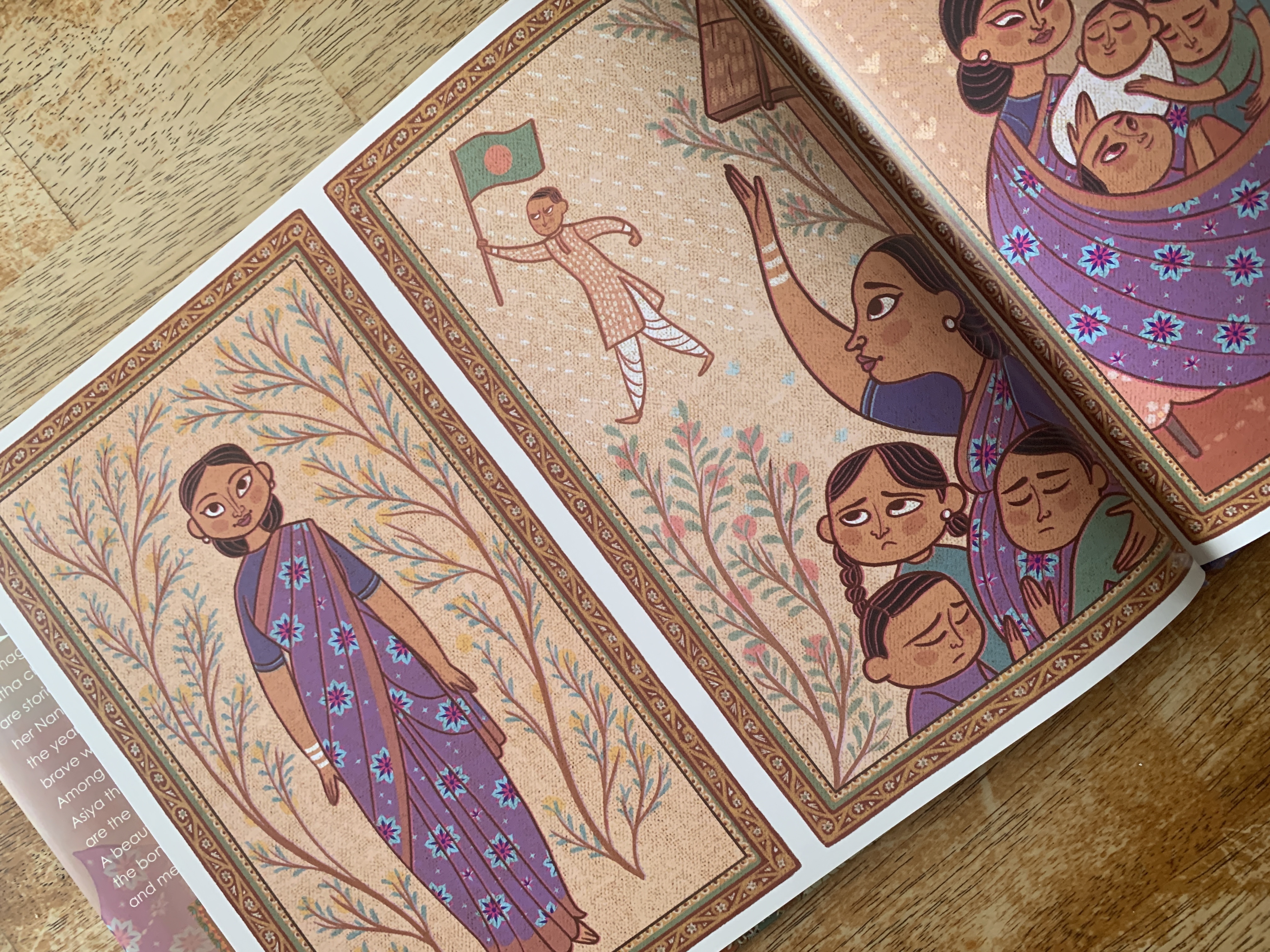 There is an author’s note and illustrator’s note detailing the construction and value of kathas, but nothing about Bangladeshi wars, wearing white after a husband’s death, or the textile skills and artistry shown.  The book would read well with context or activities about family heirlooms, connections, and traditions. 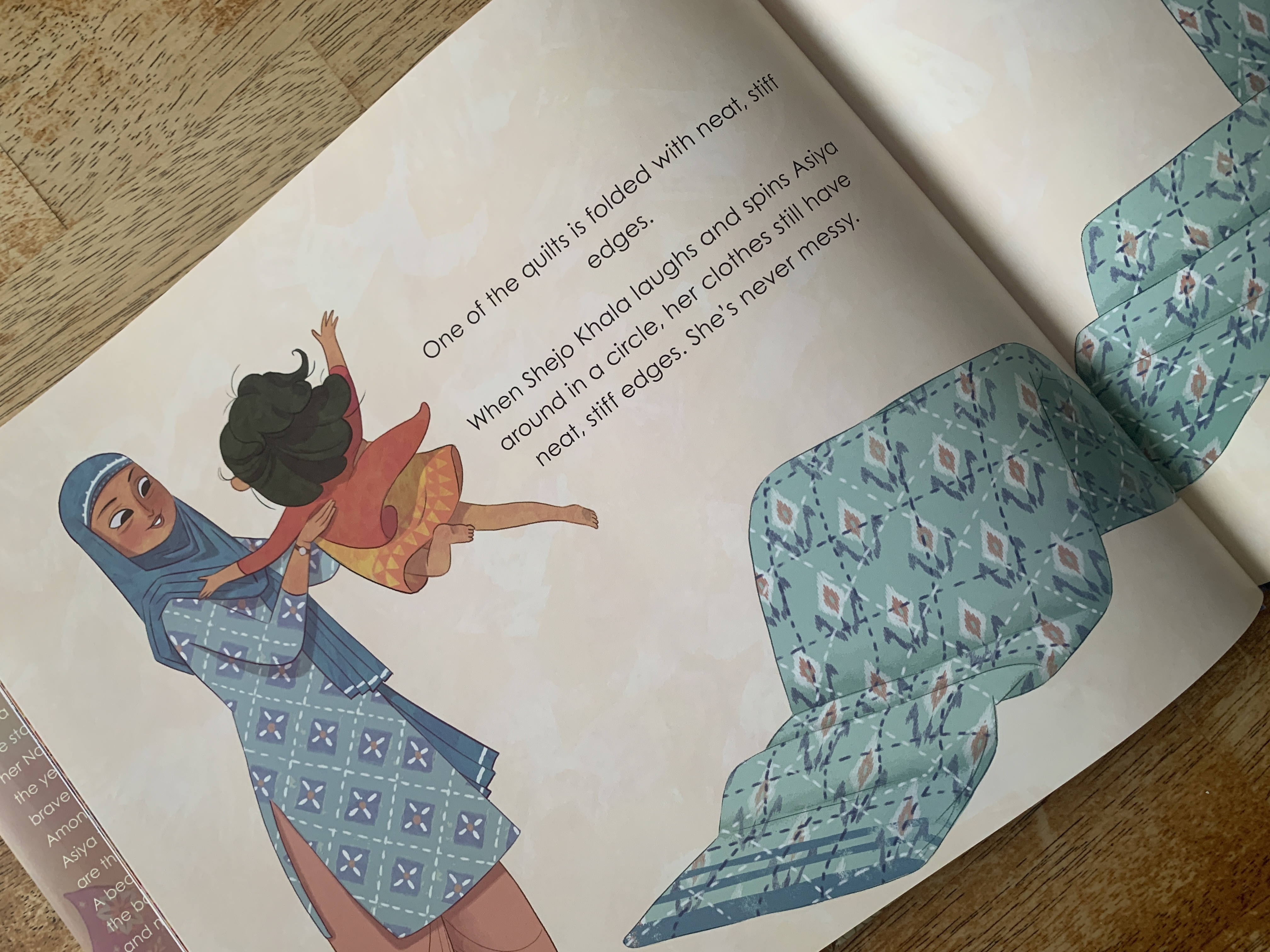 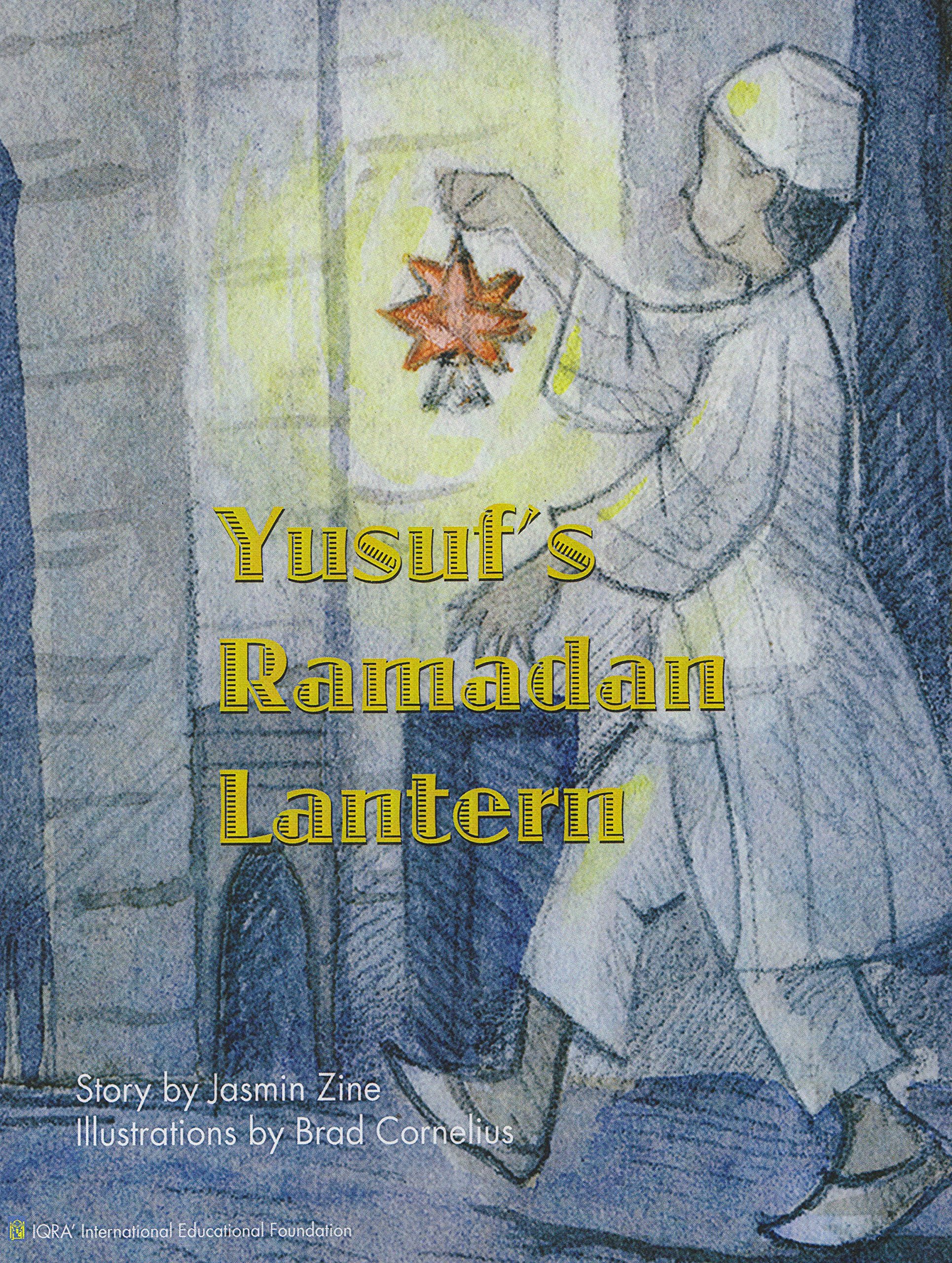 The soft illustrations on 32 pages, surrounded by ample, large, well -paced text for second graders and up give life to a sweet story about a young boy, his grandfather, and the passing on of a Ramadan heirloom.  While not a chapter book, and a little too long for little ones to enjoy as a simple picture book, the book may not beg children to pick it up and read it, but if they do, they will enjoy a sweet story that parents won’t mind reading more than once.

Yusuf’s grandparents have just returned from their trip to Egypt and Yusuf is excited to see them, and receive the electronic fanooz he asked them to bring back. But when Grandpa takes Yusuf outside to give him the gift, it isn’t the modern light up lantern he asked for, it is an old rusty, cracked metal fanooz.  Grandpa explains that the old fanooz used to be his when he was a young boy and begins his story of himself going out with his father to wake their neighbors for suhoor in Ramadan.  The subtle details of how he would be woken up, how his dad would beat the drum and the song they would sing as they would walk around, keeps the story slow and engulfing.  He then tells about returning and eating dates soaked in milk, and bread and fava beans before the white thread of light appeared.

Slowly the little boy, seeing how happy his grandfather is in his reminiscing, realizes that the fanooz he has been entrusted with is far better than the electronic one he asked for.  As he walks his grandfather out the door, he is surprised with the gift he originally wanted, the fancy new fanooz.  Not excited, his grandfather asks Yusuf what is wrong, and Yusuf, realizes that he likes the history filled one better.

The old fanooz finds a permanent place in Yusuf’s room, and he and his father fix the broken glass and polish up the metal to be regularly lit on Ramadan mornings and remind them all of grandfather as a little boy walking and waking people up before dawn.

There is sufficient referencing about Ramadan and fasting to appeal to Muslim kids and inform non Muslims a bit.  The book is not preachy, it is cultural and religious in a narrative story sort of way.

My only main complaint is that I don’t know who the target audience is with the long pages of text, and full page pictures.  It is a hard book to place.  The illustrations are sweet and compliment the story, but in the pictures, Yusuf just seems too young.  His ability to appreciate his grandfather’s old lantern verses the electronic fanooz he asked for implies a bit older child.  In the pictures he looks like he is three or four years old, a disconnect that often distracted me from the story.  I also wish they would have used an Arabic word or title for the grandfather. 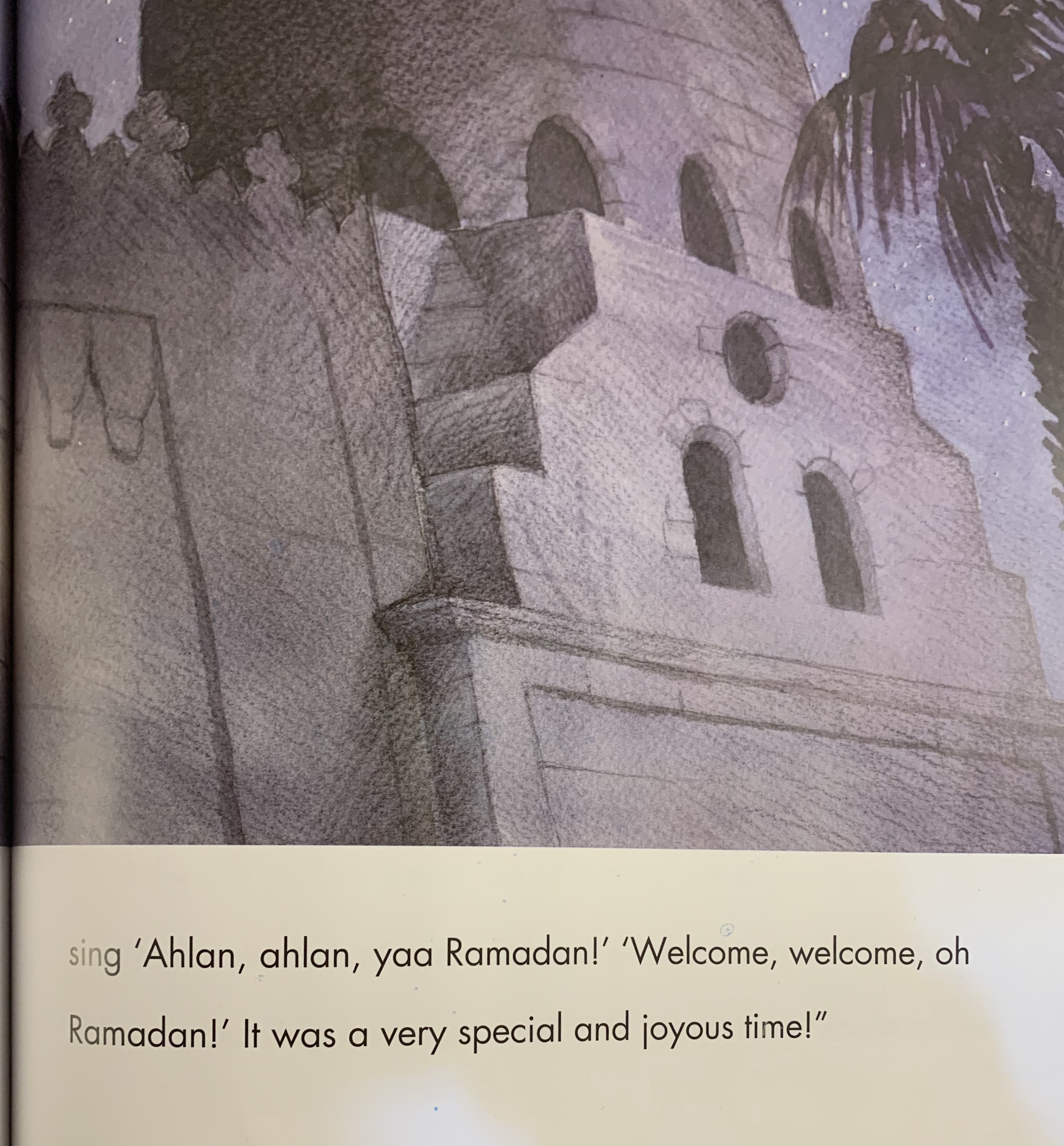 It is obviously too short and not the correct format for a book club, but I am hoping to share it at story time.  It will be a bit of a challenge for little children to sit through, but I’m thinking it is worth the effort, inshaAllah, bismillah…