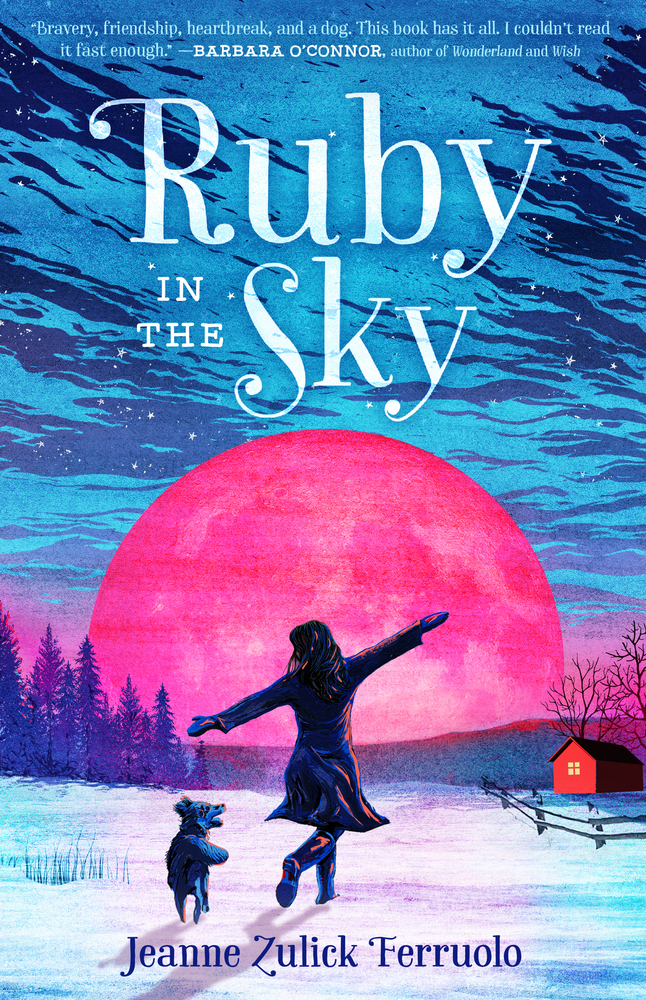 The author of this wonderful middle grades novel reached out to me after I reviewed her book A Galaxy of Sea Stars, to let me know that this book too has a Muslim character.  As we exchanged emails back and fourth I learned more about her work with Integrated Refugee and Immigrant Services in New Haven Connecticut (IRIS), and the impact the people she has met there have on her and her writing (the new paperback version of Galaxy has bonus content that reflects this).  Allies and advocates are gifts for Muslims and for our fictional representation.  The details and warmth of her Muslim character, Ahmad, a Syrian refugee, is seamless and accurate, and while this is not his story, his support of the main character helps normalize Muslims as friends and in daily life.  He takes time out for his five daily prayers, he refuses to shake a female’s hand, and he uses the word inshaAllah.  The story is Ruby’s though, and her journey pulls you in from the first chapter and leaves you cheering for her long after you close the book.  Over 295 pages (AR 4.1) you witness Ruby find her voice, dare to not be invisible, accept friendship, and help others.

Ruby has just moved to frozen Vermont from their last “forever home” in Florida.  Originally from D.C., Ruby and her mom have been moving to places they have vacationed to try and find joy.  Since Ruby’s father, a police officer, died, the two of them have been broken and barely surviving.  The only constant is a cousin, Cecy, who helps them out and convinces Ruby’s mom to come back to her childhood town of Fortin, and to be closer to her.  The winter is bitter, the house is freezing, and even with Cecy arranging for Ruby’s mom to have a job, it only takes a day for Ruby’s mom to be arrested, fired, and for Ruby to be on her own.  With only a garbage bag full of belongings, and some thrift store finds for warmth, Ruby’s plan is the same as it has been in every other town they have landed in: keep her head down and be invisible.  Ruby’s dog, Bob, though has other plans, and when he takes off into a neighbor’s yard filled with ‘No Trespassing’ signs a meeting with Abigail takes place that will change Ruby.

Abigail Jacobs is known in Fortin as the “Bird Lady.”  She has a home, but lives in a shed on her property, dresses in layers of scraps and scarves, feeds the birds, and keeps to herself.  The rumor is that she killed her husband and daughter, everyone knows it, it could just never be proven.  There are also stories that she has a moon rock.  When Ruby meets her she is angry and cold, but the way she interacts with the animals and her knowledge of the moon, keeps her intrigued and even though Ruby’s mom forbids her from visiting Abigail, Ruby and her develop a friendship of sorts.

At school Ruby’s plan to go unnoticed is challenged by Ahmad Saleem, a refugee who lives with his uncle a grocery store owner and is teased by a few classmates for his accent and disappearances at lunch time when he goes to pray.  He is kind and and determined to help Ruby and immediately declares her his friend.  Ruby tries to avoid him, but eventually he starts to win her over.  With the upcoming wax museum, a Fortin favorite, drawing near, Ruby tries to explain to her teacher that they will be leaving back to D.C. before the final presentation, but Mr. Andrews isn’t letting her off and somehow she finds herself researching Michael Collins, the astronaut that stayed on the space shuttle alone to circle the dark side of the moon while Neil Armstrong and Buzz Aldrin took their historic walk.

With the mayor singling out Abigail with his new ordinances, Ruby’s mom deciding not to take the plea deal and fight her case at trail, the short cold days, the desire to return to D.C., the wax museum approaching, and Ruby needing answers, Ruby at some point will have to stand up and speak out.

I love that the story unfolds in layers.  You don’t know where it is going, but the slow peeling away shows the complexity of people and situations.  The book doesn’t shy away from confronting stereotypes and looking beyond appearances.  I like that there is some discussion of Islamophobia, when Ahmad is overheard speaking Arabic for example, but the character that needs the most standing-up for is an elderly white woman.  The small pivot allows the book to avoid a familiar theme and shows the reader a Muslim shop owner helping the tattered woman that the town fears and resents. I enjoyed the strong reminder of how women and science and their careers have not been widely accepted until recently.  I think many readers will be surprised that much of Abigail’s rumors stem from her being a brilliant educated woman that society struggled to respect then and now.  I absolutely love the science and space aspects that bring Ruby Moon, her neighbor, and her class project together.

I wish there was a little bit more about her mom and her relationship at the end.  The disconnect in their relationship warranted the sparse information in the majority of the story, but I needed some hope for the two of them.  Same for the relationship with Cecy.  I get that Ruby doesn’t have a good relationship with her mom’s cousin, but as Ruby grew in so many ways, I wish that her appreciation of what Cecy has done for her and her mom would have also been realized in some capacity.

I probably wouldn’t focus an entire book club on this book, but I think it would be a great addition to a summer reading list.  The insight into a character trying to find herself within her own family and experiences with connections to history and science would be a benefit to any child to read and reflect upon.

This 208 page graphic novel, is indeed graphic.  The unbelievable horrors detailed in the stories shared are all sourced and referenced in the nonfiction anthology. The intent isn’t shock and awe like the war that created such abysmal breaches of justice to be done in our name (Americans’), but is definitely a painful reminder of how fear and mismanagement allows the US treatment of individuals to grow and continue outside of the rule of law, and all that the US claims to represent.  The careful use of words such as “detainees” instead of “prisoners,” “enemy combatants” instead of “terrorists” or “criminals,” have allowed Muslim men to be held since 2002 without charges, legal representation, habeas corpus, or basic human rights.  When the prison was being filled, you’d hear about it in the news, when the government released heavily redacted reports on torture, you’d catch a headline or two, but there are still people being held, and for the most part, we, the world, have perhaps forgotten.  This book is a reminder, it is insight, it is so important that high school and college aged children are aware of what we are capable of, that adults are not allowed to forget what we are doing.  As it says in the intro, “To indict the people who did this is to indict the country that allowed it to happen.” We are all guilty, and this book is not an easy to read as it will make you angry, and devastated, and exasperated.  Don’t let the graphic novel format and simple text fool you, this is a difficult read, emotionally, and you should force yourself to sit with it- sit with the outrage and frustration, and see if it can spur you to action.

The book is broken up to provide an introduction, map, facts, and a timeline, it then starts with the author arriving for a media tour to Cuba.  Some background stories about key individuals in understanding the effects of torture and better and more accurate ways to interrogate, and then the fateful day September, 11, that changed everything.  From here the stories are individual accounts of prisoners, lawyers, politicians, etc., each depicted by a different illustrator, to show a very rounded view of the effects of the prison, and thoughts by different people in a  variety of associations.

Some of the prisoners were swept up by neighbors responding to leaflets promising wealth for turning people in.  Some were taken from their homes for no reason, a few were taken from the battle field, but every single one has never had charges against them, nor a day in court, the few that have been able to be represented have been released without being accused of anything, hence, found to be innocent.  The doubling down on the concept of Guantanamo being the worst of the worst, administration after administration has made it so prisoners have to be released to countries they have never been to, with unknown rights or a way forward.  Those that are still detained have been there for nearly 20 years. 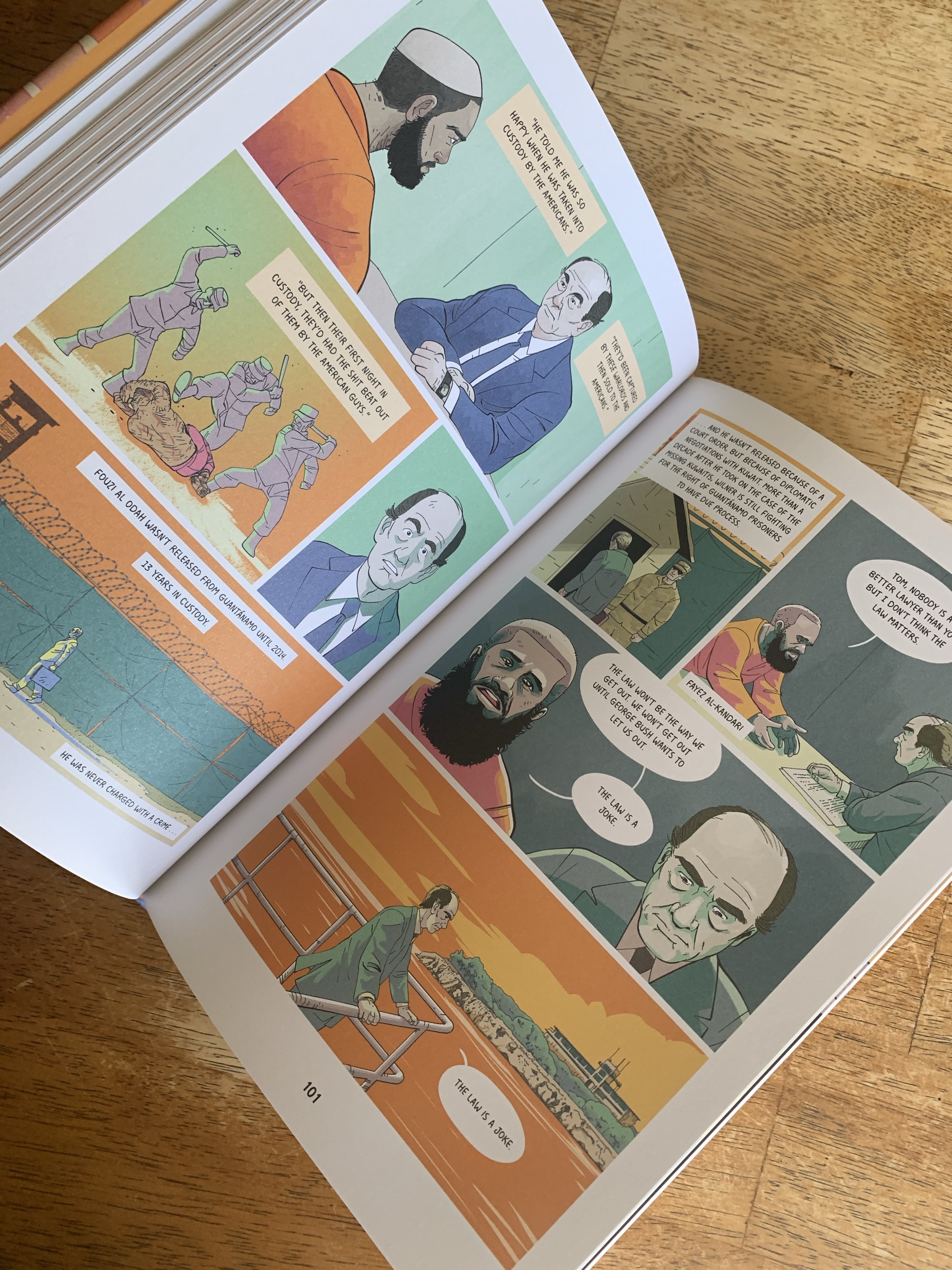 I like that the book is personal, it is harder to dismiss or forget, or be unaffected when you are looking at images and surrounding yourself with guards and lawyers that are saying over and over, that these prisoners are innocent.  I like that it challenges Americans to demand more of America, it isn’t just putting the USA down nor does it read like the narrative has it out for the USA, it is very much an personal calling out, that we have made errors and continue to make errors out of arrogance.

The images and language are at times graphic and one should be aware of the potential triggers of torture, and abuse. There are curse words spoken, and violence detailed.  High school and up. 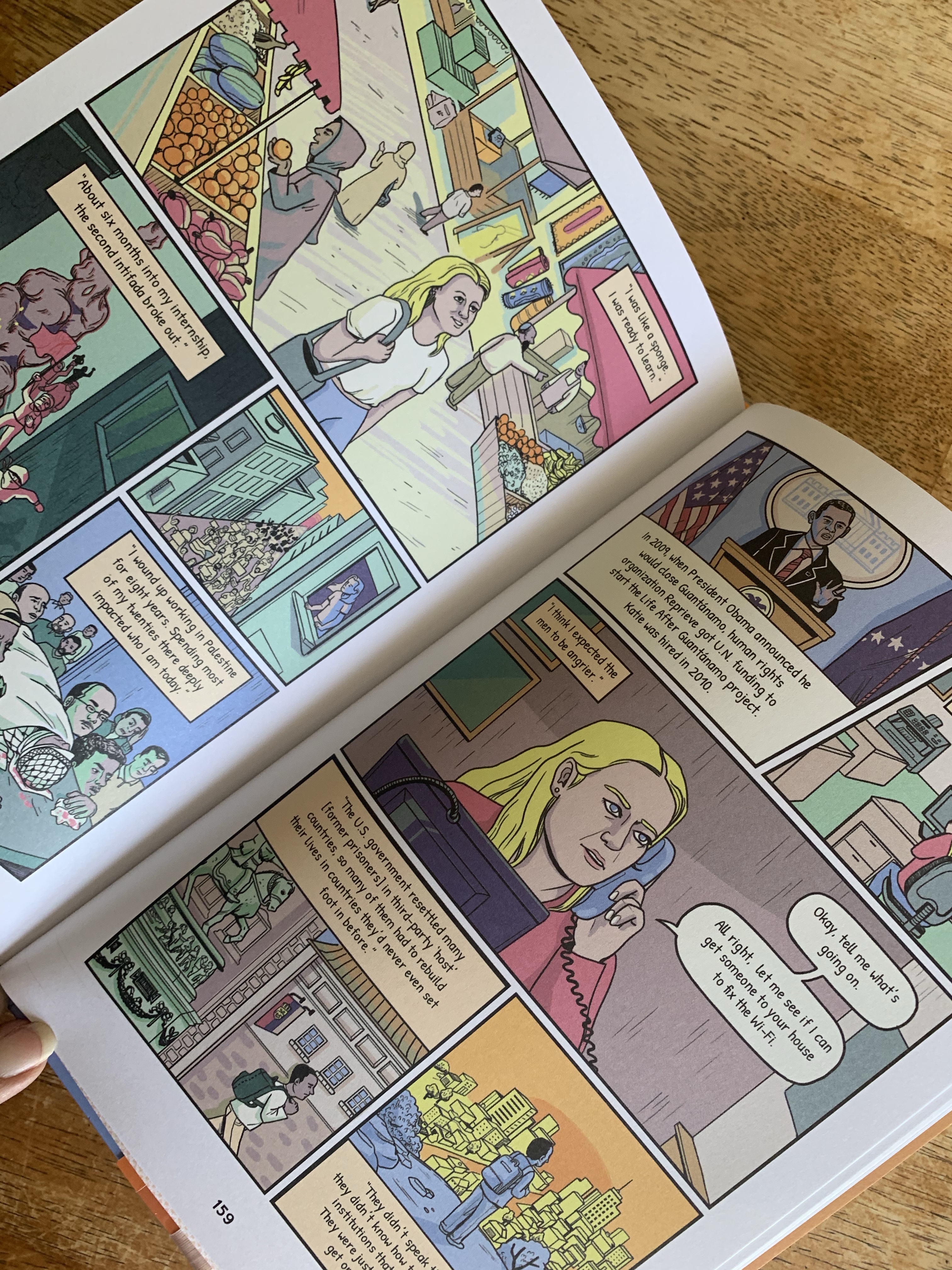