I really enjoyed this Islamic moral book about gossiping.  Over the years I’ve taught a few Sunday school lessons, class lessons, and even hosted story times on the Islamic cautions regarding backbiting, and honestly I don’t think kids really grasp how easy it is to commit the act and be a part of it.  They understand they shouldn’t do it, what the punishment is, and that it is bad, but I don’t know that the materials I’ve used and seen, have really connected with younger kids without a lot of supplementing; and this book highlighted that we really can be messaging better on a child’s level.  The pages are incredibly text heavy, but neither I nor my audience seemed to mind until close to the end, because of the comedy and relatability of the story up to that point.  I think the coach getting overly involved took it back to being a lesson from adults and broke the child perspective tone.  I do love that the kids that listen to the gossip are also held accountable, the importance of the coach’s message clearly is important, but the story telling quality would have benefitted from a few tweaks.  The illustrations are cute, unfortunately the font is not very appealing.  I do like that the salwat is given in Arabic, and that Hadith are mentioned in the text as well as in the backmatter with an author’s note.

The story starts with Talia owning that she loves to share tales about the people around her, before telling one to her older sister.  Her sister tries to stop her and tells her that she needs to watch what she says or she might one day have to eat her words.  Talia wonders what eating your words means.  Similar situations occur between Talia and her brother, her mother, as well as her father.  Each time the story is reprimanded and a funny euphuism remarked upon and then giggled about by Talia.

At school she does the same, telling stories, often at the expense of a boy named Ahmed, and the more interest the other kids show, the more outrages her tales become.  She soon starts telling them about everyone, and her classmates and friends grow weary and fearful that they might be next.

It all comes to a climax when Talia’s classmates say enough is enough and stop talking to her, and go as far as refusing to pick her when picking teams, and playing with her at all.  The coach concludes then that the match should be cancelled and Talia should apologize.  The cancellations seems extreme, and the forcing to apologize almost takes away from the emotional realization that her “tales” have become bullying. 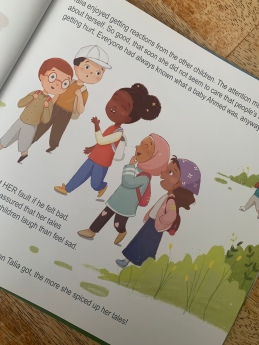 As Talia leaves, her classmates gather up and she sees Ahmed not joining them.  When she gets to her front gate, her friends catch up to her and apologize and acknowledge their roles in perpetuating the gossip.  Talia then goes to find Ahmed and get him some ice cream to apologize.

I don’t quite think the friends needed to apologize, I think they should have just realized their role, I think with discussion it might be clarified, but I worry that it defers Talia’s ownership of wrong doing, and could send some mixed messages. 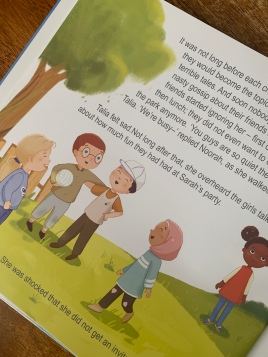 It is also a little pausing that Talia makes up a story about why a girl wears hijab, when her own mother wears hijab and she is clearly Muslim.  On the one hand, I like that it shows how ridiculous her tales have gotten, but it also could seem like she is falling for a stereotype as well.  There is good rep in the illustrations of those that cover and those that don’t, there is a child in a wheelchair and lots of shades of skin colors and hair types.  The text also contains traditional Islamic names and some that are not.

The book helps our children to be better and the story engaging enough to be memorable, that while I wish it was cleaned up a better to strengthen the writing, I do find it a benefit on a shelf to be shared at bedtime, in classrooms, in story times and as a reminder to not participate in gossip or listen to it.