I’m not sure what I expected this book to be, I just knew I wanted to get my hands on it, but I’m fairly certain, that even if I would have had some expectations, they would have been no where near how well done this 40 page book for four to eight year olds is overall.  It is unapologetically American-Palestinian Muslim in an inclusive funny delightful way, that only an OWN voice book can be. There have been some great picture books lately that are authentic, yet mainstream, and this book pushes that standard just a little bit higher as it normalizes jummah, halal food, dabke, hijab, with familiar threads of street food, spunky little sisters, untied shoelaces, tradition, and excitement.  The story has a twist and some intentionally misleading foreshadowing, that give the book depth and added fun.  Readers of all backgrounds will relate to this book and find something that they can relate to, as they laugh and marvel at Musa’s infectious enthusiasm for hot dogs. 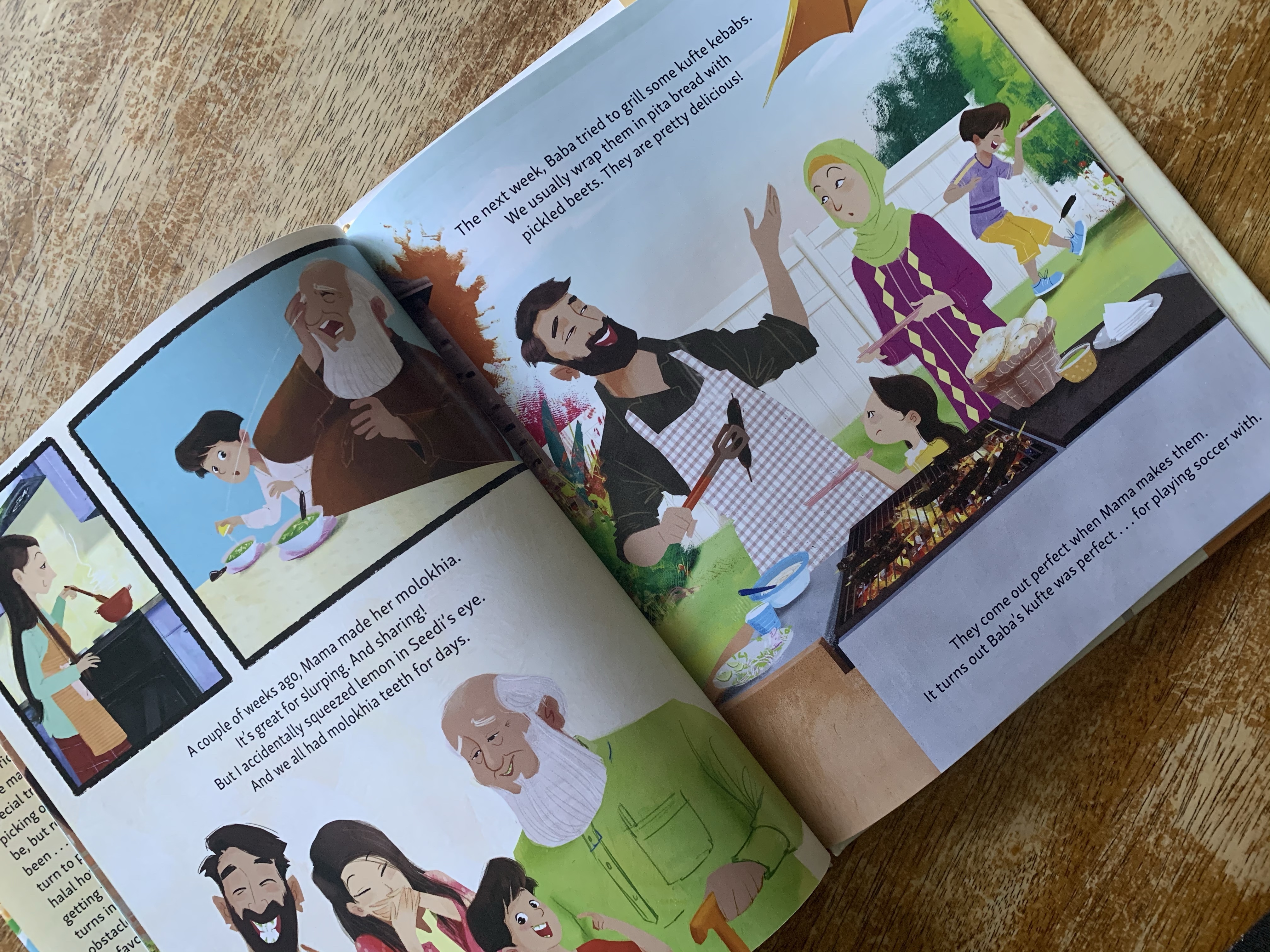 Musa Ahmed Abdul Aziz Moustafa Abdel Salam, aka Musa, loves Fridays.  His family heads to the masjid for Jummah prayer and then home for a special Jummah treat.  Lately, they’ve had molokhia, that stayed in their teeth for a week, kufte kabobs that were better for soccer playing than eating, riz bi haleeb with lost dentures, and prelicked jelly beans.  Alhumdulillah, this week is Musa’s turn to pick, and he is picking his favorite: halal hot dogs with Salam sauce. 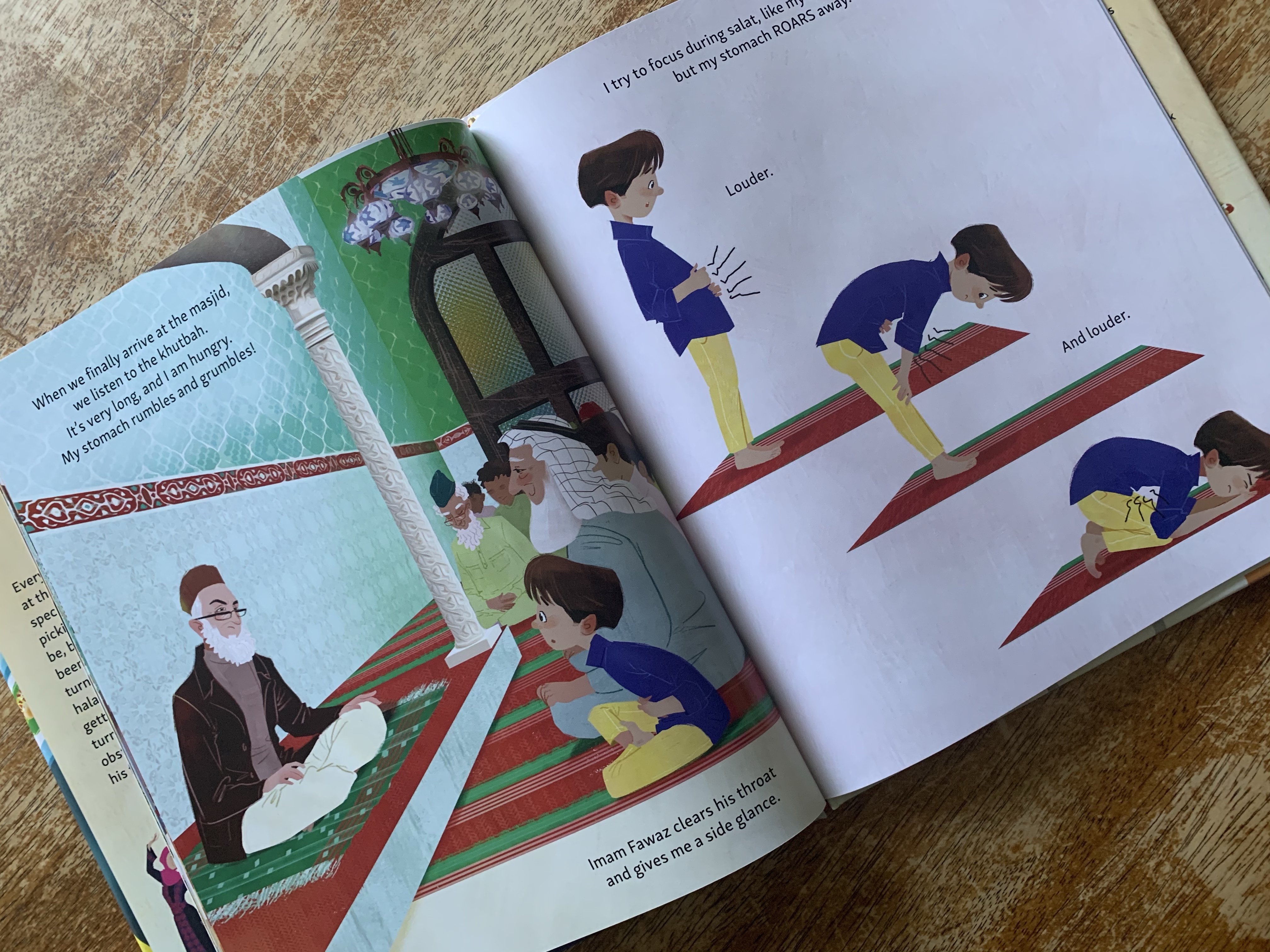 They head to the mosque dancing dabke as they leave their house with smiling faces.  The khutbah is long though, and during salat his stomach is roaring! Afterward he is off, but Seedi has to help Maryam find her red shoes in a sea of red shoes and mama is chatting with friends.

Dad gives in and lets Musa go get the hot dogs alone.  As he heads to the stall with the best hotdogs: the perfect amount of hot, chewy, juicy hot dog goodness, he passes all sorts of foods being eaten.  There is falafel and bao and tacos and samosas and churros, but he is determined to get hot dogs, even though the line is really long.

He sees friends in line, and firefighters, and even his school principal.  Everyone loves hot dogs, even birds and squirrels.  Finally he buys a whole bag full with special Salam sauce and races home to share with everyone.  But uh oh, it doesn’t go as planned, and I’m not about to spoil it, so get yourself a copy like I did from http://www.crescentmoonstore.com or your library, and maybe don’t read it while you are fasting, because you will be craving hot dogs, mmmmmm nom nom nom.

There is an Author’s Note at the end that details her kids’ influence on the story and explains that a portion of the proceeds go to UNRWA USA, a non profit that helps Palestinian refugees.  There is a glossary of Arabic Words and Terms, and a section explaining Halal Laws.

The book shows the mom in hijab outside the home, and uncovered within the home.  There are diverse skin colors among the Muslim and non Muslim characters in the book, as well as a variety of ages depicted.  Seedi wears a keffiyah on Jummah, but different clothes on different days.  The illustrations are wonderful and descriptive and do a lot to compliment the story by setting a relatable and diverse-positive visual.