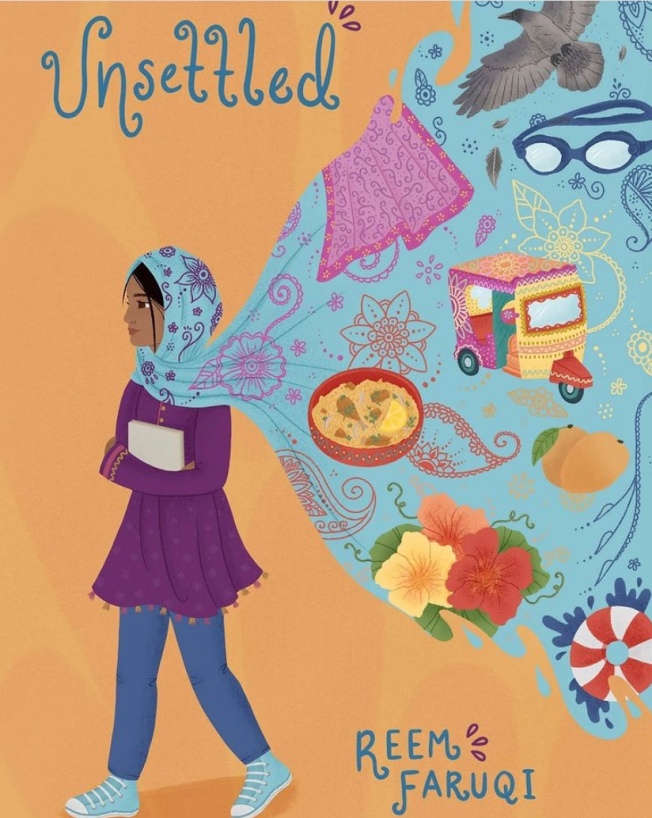 This book is a great OWN voice, middle grade coming of age book that rings with truth and hope in its poetic lines that sweep you up and keep you cheering.  Over 352 pages the author’s semi-autobiographic story of coming to Peachtree City, Georgia from Karachi, Pakistan beautifully unfolds.  I absolutely loved this book and the way it is told, in verse.  The details, often small, ring with such sincerity that even those that have never moved to a new country, or been to a new school will feel for young Nurah Haqq and be inspired by her success, touched by her hardships, and disappointed in her mistakes. 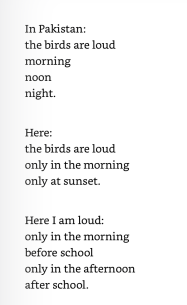 Nurah’s best day is spent on the beach with her best friend Asna, playing in the warm waves and riding camels.  However it ends up also being her worst day, when she returns home to her father’s news that they are moving to America.  Strong, confident Nurah who spends time with her grandparents, swimming with her older brother Owais, and excelling at math in school is reluctantly leaving it all behind to start anew.

When they arrive in Georgia the family of four settles in a hotel until they find a house.  Everything is different and new, and the transition with no friends and family difficult for the entire family.  The way words are pronounced, the way the air feels and the birds chirp all make Nurah long for home.  When they find a swimming pool at the rec center, things start to slowly change.  Owais was a medal winner in Karachi, and will be one here too, people start admiring him, and Nurah tries to bask in his light.

School starts and math is a relief, but people are white, so white, and a boy reaches out to shake her hand.  She feels betrayed that she has been told the schools in America are better, and lunchtime, with no one to sit by is a huge stress.  She questions her clothing, her appearance, and the weather.

Her and Owais try out for the swim team and make it, and Nurah makes her first friend, Stahr. Stahr lives a few houses down from their new house and when Nurah’s mom has a miscarriage, it is Stahr’s mom who comes to show support and give comfort.  The support is reciprocated when Stahr and her mom need help escaping from her abusive father.

As Nurah works to win swimming races and be more like her brother, she works to find her voice and use it to defend others and herself.  A terrorist attack committed by someone claiming to be Muslim sets the family up to be targets.  In a moment of jealousy, Nurah doesn’t intervene to help her brother and the consequences are huge.

I love the details and how they are articulated.  I related to so much of Nurah’s feeling and impressions, that I reached out to the author and found her to be just as endearing as her character.  The feeling of being different when swimming because of your decision to be modest, the role of food to comfort you and make you feel at home, the older brother that you so desperately want to resemble and be like: All of it hit close to home for me.  I love how religion and culture are so much a part of the story and about the character’s identity, not to be made preachy, just to understand her and her experiences.  She goes to the masjid, she prays, she starts to wear hijab. I love how she finds her voice and defends those that can’t, but that her path is not easy.  She makes mistakes and she has to challenge herself to do what is right.  The backdrop is always trying to “settle” in a new place, but the story has it’s own plot points that are interesting and simply made more impactful by Nurah’s unique perspective.

There are lots of little climaxes and victories for Nurah that show her to be well-rounded and relatable.  You cheer for her early on and enjoy the journey.  The only slight hiccup I felt was the name confusion of her Nana and Nani (Nana), it is explained, but it was a little rocky for me, it might be based on a real thing in her family, but once that is resolved, the book flows beautifully and smoothly.

Nothing a 3rd/4th grader would find alarming, but none-the-less:

Crushes: Nurah has a crush on a boy at school when he shakes her hand and picks her for a lab partner, but she moves on from him while still maintaining a crush on her brother’s friend Junaid.  Nothing happens, she just thinks they are cute.

Miscarriage: Her mother has a miscarriage and it details a blighted ovum and the mental strain on the mom and family in the aftermath.

The book is a little below level for my middle school book club, but I think it it was on a bookshelf and a middle schooler picked it up, they wouldn’t set it down until they were done reading it.