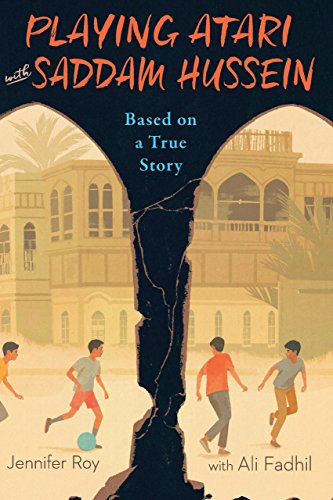 This 165 page AR 3.9 book about the 42 days in 1991 that Iraq was at war with the United States is told from an 11 year old half Kurdish Christian boy’s perspective, but he mentions that he has friends that are Muslim and culturally and historically the book is relevant, important, and engaging as well.  I had my 9, 11, and 13 year old read it to gain perspective of the Gulf War, the difference between politics and people, and to see diverse religions co-existing despite stereotypes, especially in the middle east.

Ali gets the highest score on his Atari console the day that the bombs start falling.  Ali and his brothers Shirzad and Ahmed, and sister Shireen along with their parents retreat to the safest room in the upper middle class home to hopefully stay safe.  With experience of surviving the Iran-Iraq war which ended just three years earlier, the kids camp out at night in the room farthest from the nearby school and spend their days playing soccer in the abandoned streets.  The safe room was determined by knowing that Saddam uses his own people as human shields and places military installments in public service locations so that he can use propaganda to try and convince people that the enemy is bombing schools and hospitals intentionally to harm the innocent.

When the electricity goes out and the water cuts off, the family is forced to accept government rations.  Their dad is a dentist, but as he is essentially property of the state, he is forced to work as a medic and is often absent from home.  The family lives in Basra, which is in southern Iraq and near to the invaded Kuwait, thus all the troops pass through the city and the children spend their days keeping up their house, playing soccer with their friend Mustafa and trying to avoid the bullies Omar and Umar who’s father is in Saddam’s Ba’ath Party.

Ali speaks English because of his love of American TV and feels that if he can meet some US soldiers he will convince them that he should be in America not in Saddam’s Iraq.  He loves Superman, video games, soccer, his family, and his country, but the people, not the leader, he loathes Saddam, even though he knows he can’t ever speak ill of him.

A trip to get rations results in Ali seeing public executions and a colleague of his math professor mother’s getting hauled away.  A visit from their cousin gives them news that their father is missing. Life is not easy for the family, and yet they know they have it better than a lot of other people.  After the war, once again the family will have to put back together their lives and carry on.

The book concludes with a 14 year jump and Ali translating at the trial of Saddam Hussein where the leader who has been hiding is found guilty and sentenced to be killed by hanging.

I love that Ali is so relatable, he could really be a kid anywhere which makes what he sees and hears and experiences all the more intense.  The way that the book shows how the soldiers are forced to be soldiers, the citizenry at the mercy of the government, and the inability to speak freely so very real and frightening, is strong, but not traumatizing to the reading audience.  Even Ali being forced to observe the killing of  people in the street is handled with the target audience in mind.  They are Kurdish and had to deal with that within Iraqi society, which is a nice added layer to understanding that Iraqis are not a single monolith.  I love how the family had to go to the governor’s house and how nice his son was, even though, they are all Ba’ath Party members and part of the larger oppressive system.  It shows that things aren’t always black and white, and to convey all this to eight and nine year olds so clearly is quite remarkable.

I also like that the book holds up over time.  My kids had no idea what Atari is or was, but they could understand that it is a video game, and that it was an escape during the night for Ali to imagine he was playing a game trying to catch the falling bombs as a way to be brave and endure.

I would consider this for a middle school book club, it is a bit short and definitely more middle grades, but it would allow kids to identify and imagine and discuss war through the fictional characters and voice their understandings of an authoritarian government structure, which would be interesting.

Women you have heard of, some you are meeting for the first time. Some you like, some you disagree with, women that cover, women that don’t, some young, others older, some athletic, some academic, some a little bit of both.  One fictional, a few political, but in the end, all strong women of today, all Muslim, all unique, from all over the world, all known for paving the way for others to follow. 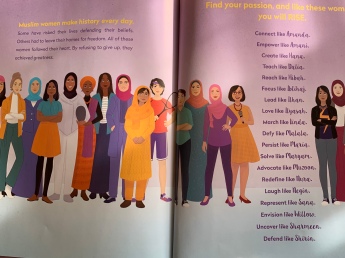 In 42 pages, 19 females are highlighted and illustrated to inspire Muslim and non Muslim boys and girls alike, but really Muslim girls will get the most out of it.  Sure a female gets mentioned here or there in other compilations of influential people of our time, but this one, well, this one seems mostly for us.

There are famous females in science, activism, fashion, film, sport, education, media influencers, make-up artists, you name it, and Muslim’s participate, so finally a book shining a light on the best of the best.  With each person getting a full two page spread, a few tidbits about who they are and what they are “famous” for are detailed in easy to read sentences that inspire, and if you haven’t heard of them before, enough general knowledge to get acquainted.  A few felt a little generic, but once you have a name, Googling them or researching them, is obviously, not difficult.

I wish there was a bit more information detailing who was chosen and why.  At first I thought it was  US or “western” movers and shakers, but then you have Maria Toorpakai Wazir, the tennis player in Pakistan, and Shirin Ebadi from Iran.  So then I thought ok, they are all contemporary, but Maryam Mirzakhani passed away in 2017.  Needless to say, one could argue that the list is arbitrary, and I think I would agree.

One could also argue, that these women may make history for notable things, but that they might say or do things that you might take issue with, and again, I agree.  They are people, they are fallible, and diverse, and have different perspectives and life experiences, but that’s ok, infact I think that might even be the point.  We all have different passions, and paths, and views and yet at the end of the day we should be able to lift each other up and inspire.  I think every person who reads this book will find someone that sounds or feels or looks like them, and that is a good thing, no, a great thing! 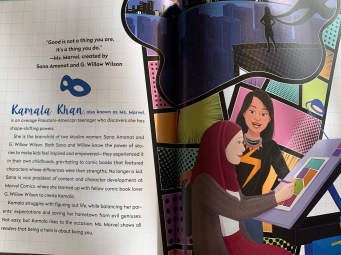 My favorite was the Kamala Khan entry, because I didn’t realize the G. Willow Wilson was Muslim.  I erroneously assumed the other co-creator, Sana Amanat gave Kamala’s back story and home life its sense of OWN Voice, and I love that I learned I was wrong from a book.

The illustrations are right on and do an amazing job of conveying the character and the inspiration of the collection.  The book is much needed and I hope they do a similar style book for Muslim women in other time periods.

Special gratitude and appreciation to Gayartri Sethi (IG @desibookaunty) for gifting me this book for no other reason than to share the power and strength of women, and being a leader in that, by sending me a beautiful book.  May I learn from your generosity and pay it forward! Thank you.