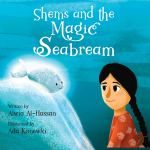 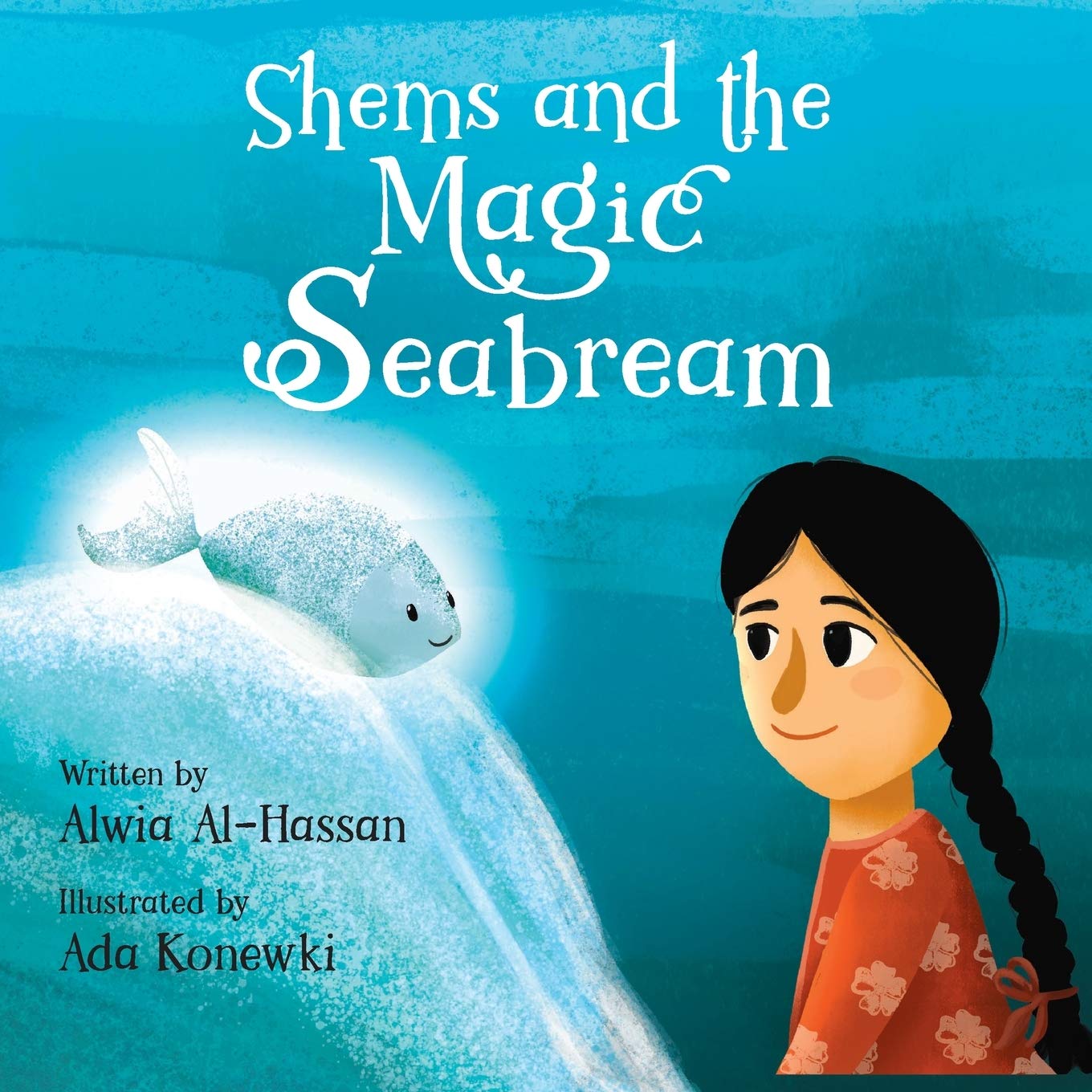 I don’t know how to review this book, I truly don’t, it claims to be based on Saudi folklore, it has #muslimsintheillustrations, and references Allah swt once, it is by a Muslim author, but it isn’t religious. And it definitely isn’t for everyone. It is terrible, and yet you can’t look away. Every stereotype about appearance and trope about step-mothers, it is all there, but EVIL CACKLE, the book is delicious, and not in the cooking the children and eating them sort of way, that is in the book too, but in the laugh-out-loud, gasp in disbelief, and be shocked at the complete disregard for political correctness, moral messaging, and lesson teaching that leaves a brightly illustrated dark tale for kids, and adults, to thoroughly enjoy. It pulls you in, it suspends reality, it makes good and bad so black and white that you accept the attempts at murder as justified, and it ultimately reminds you of the horrors that all fairytales build upon to entertain. I remember the first time as an adult I was asked to read Hansel and Gretel to a young niece. I knew the story, and started not thinking much of it, and then I froze: children are lost, they seek shelter in a home where they are not allowed to leave, the owner of the home wants to cook them and eat them. Yeah, this book is like that. 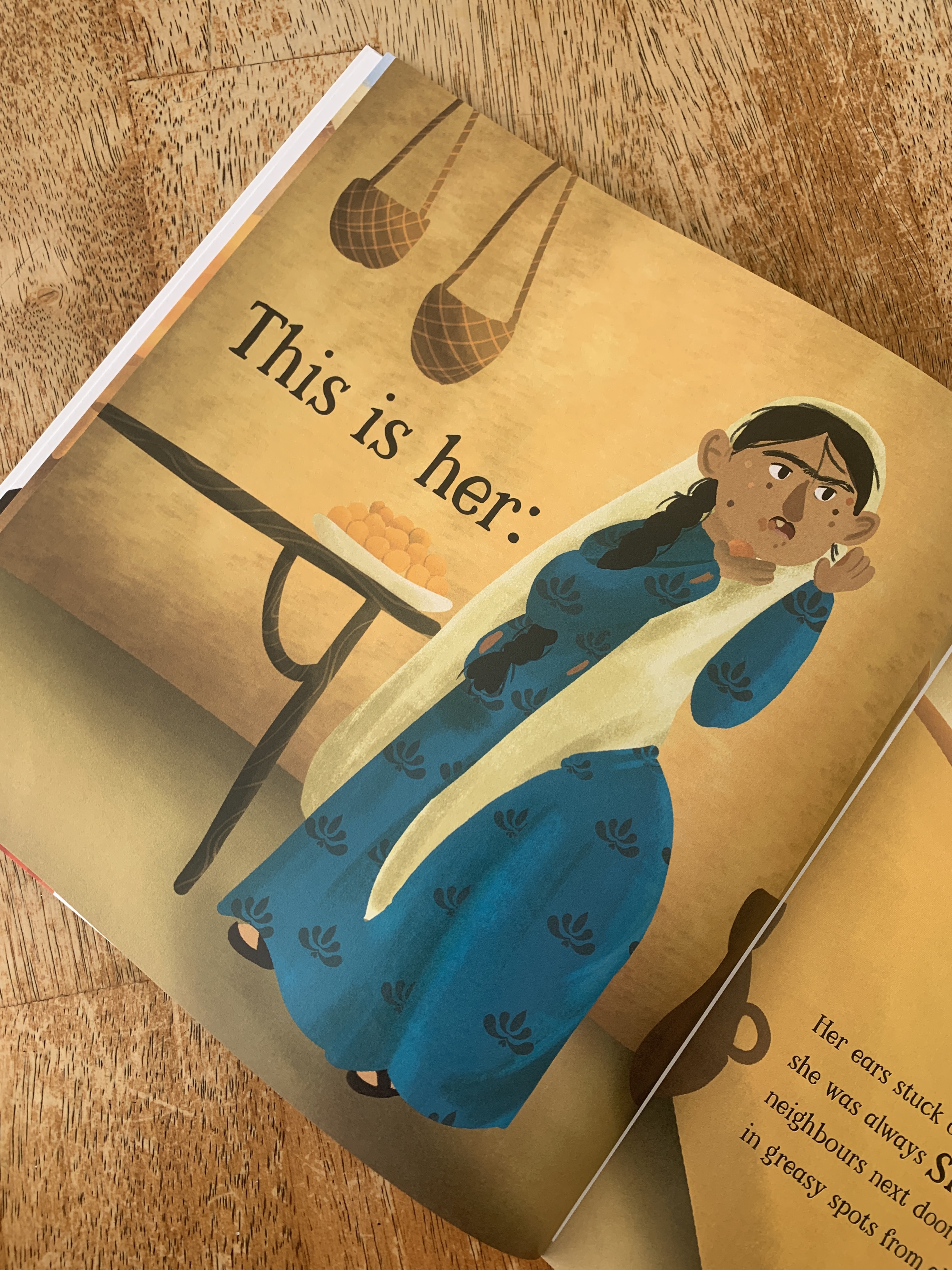 Shems and her twin sister Shareefa live in a small town with their fisherman father. They are poor, but happy, until their father remarries and the stepmother is horrid. She is ugly and fat and covered in greasy spots, negative connotations that reflect her personality. (FLAGS: superficial judgement and body shaming). She hates children. (FLAG: Yes it uses the word hate, and calls children fat while contrasting them with cute children). 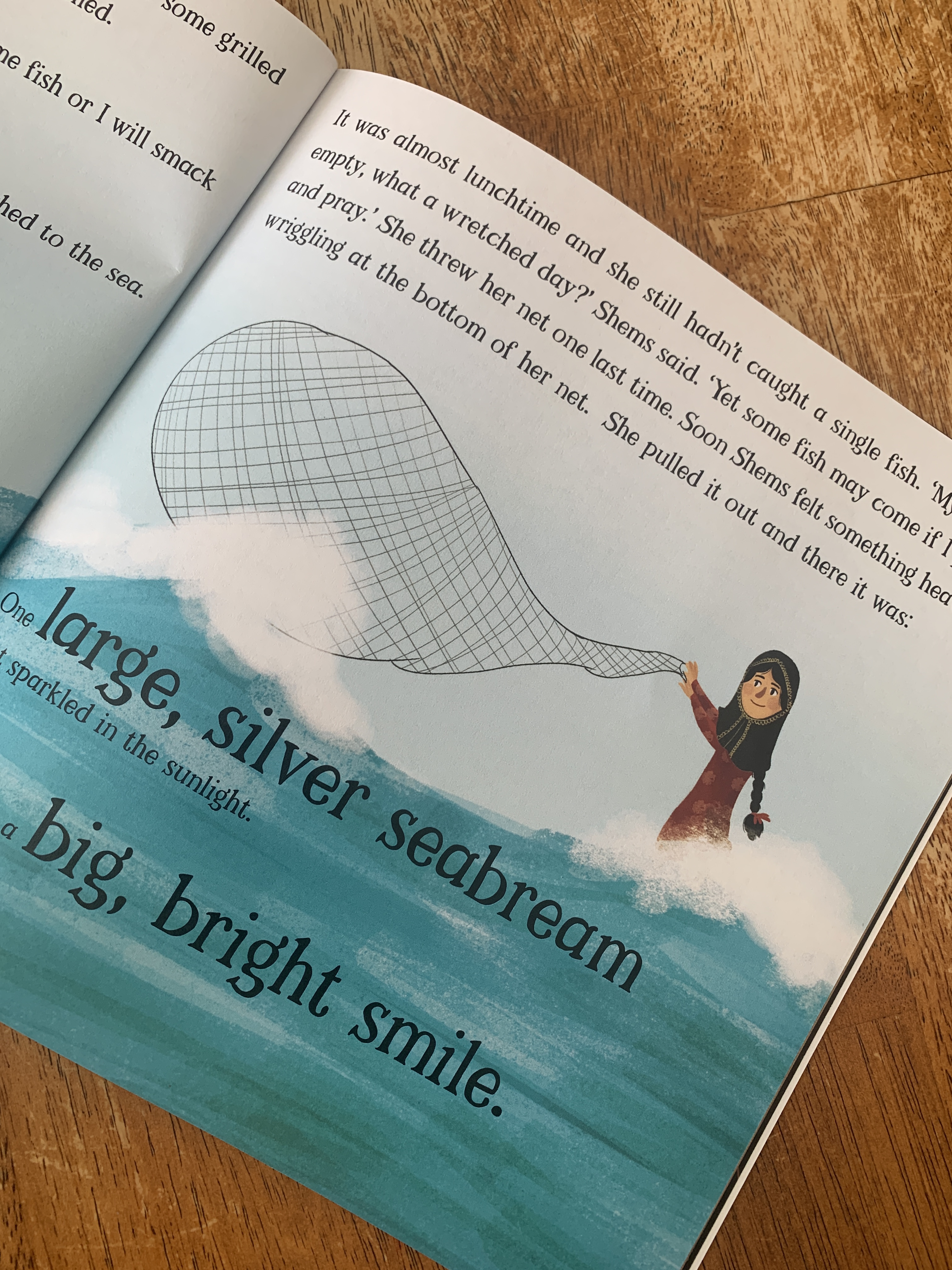 She especially hates Shems and Shareefa. She tries to get rid of them: she puts them in the oven, abandons them in a field, tries to drown them in the night. But the girls somehow always escape and their father believes that it was all a misunderstanding. (FLAG: attempted murder). 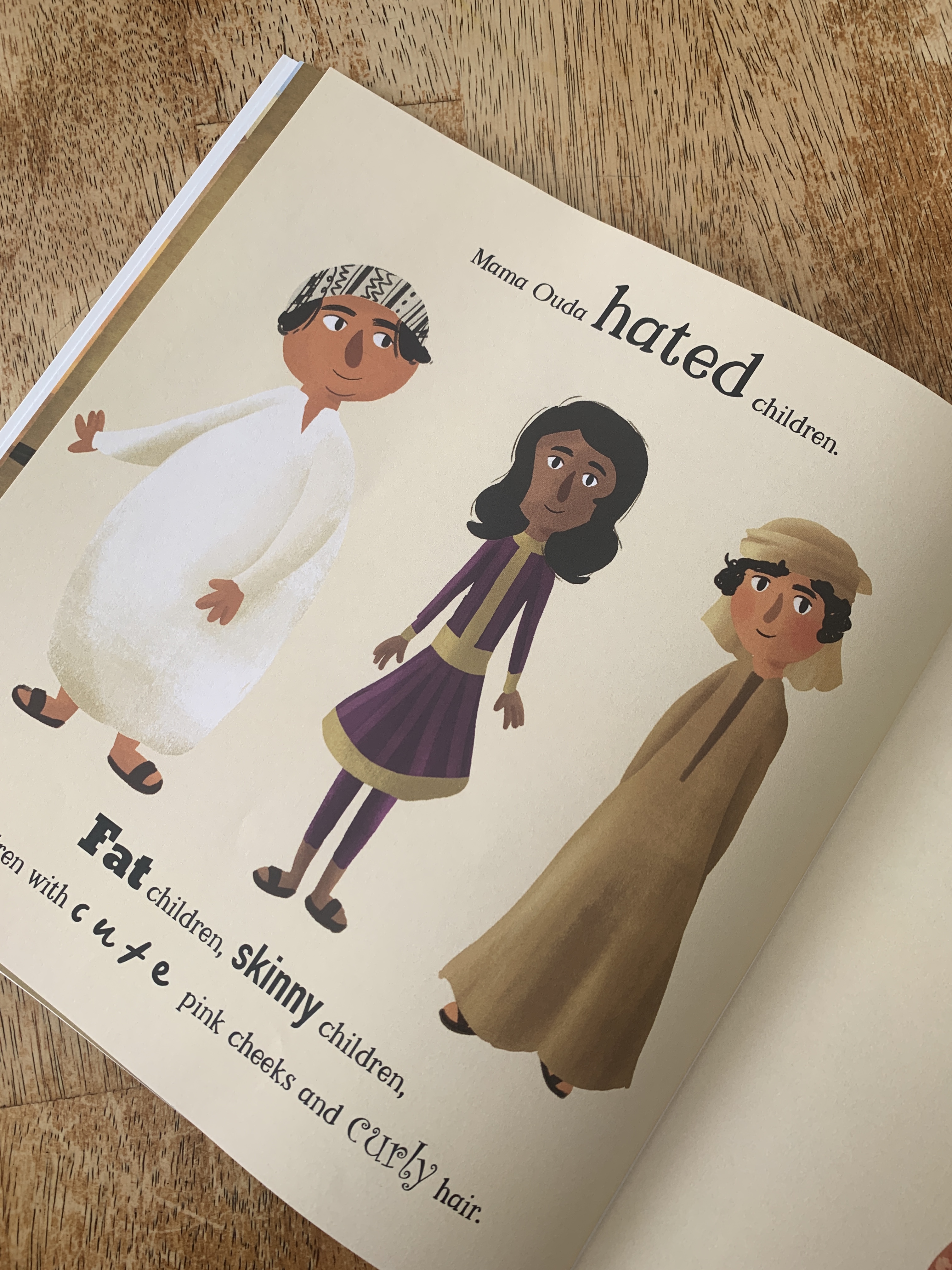 Now that the girls are older, they are forced to serve Mama Ouda, and when food runs low, she considers eating them. (FLAGS: abuse and threats). Luckily they are much too thin. One day when Mama Ouda is craving fish, Shems heads out to catch some seabream, yes that is a real type of fish. And the only one she catches is a magical one. (FLAG: magic). 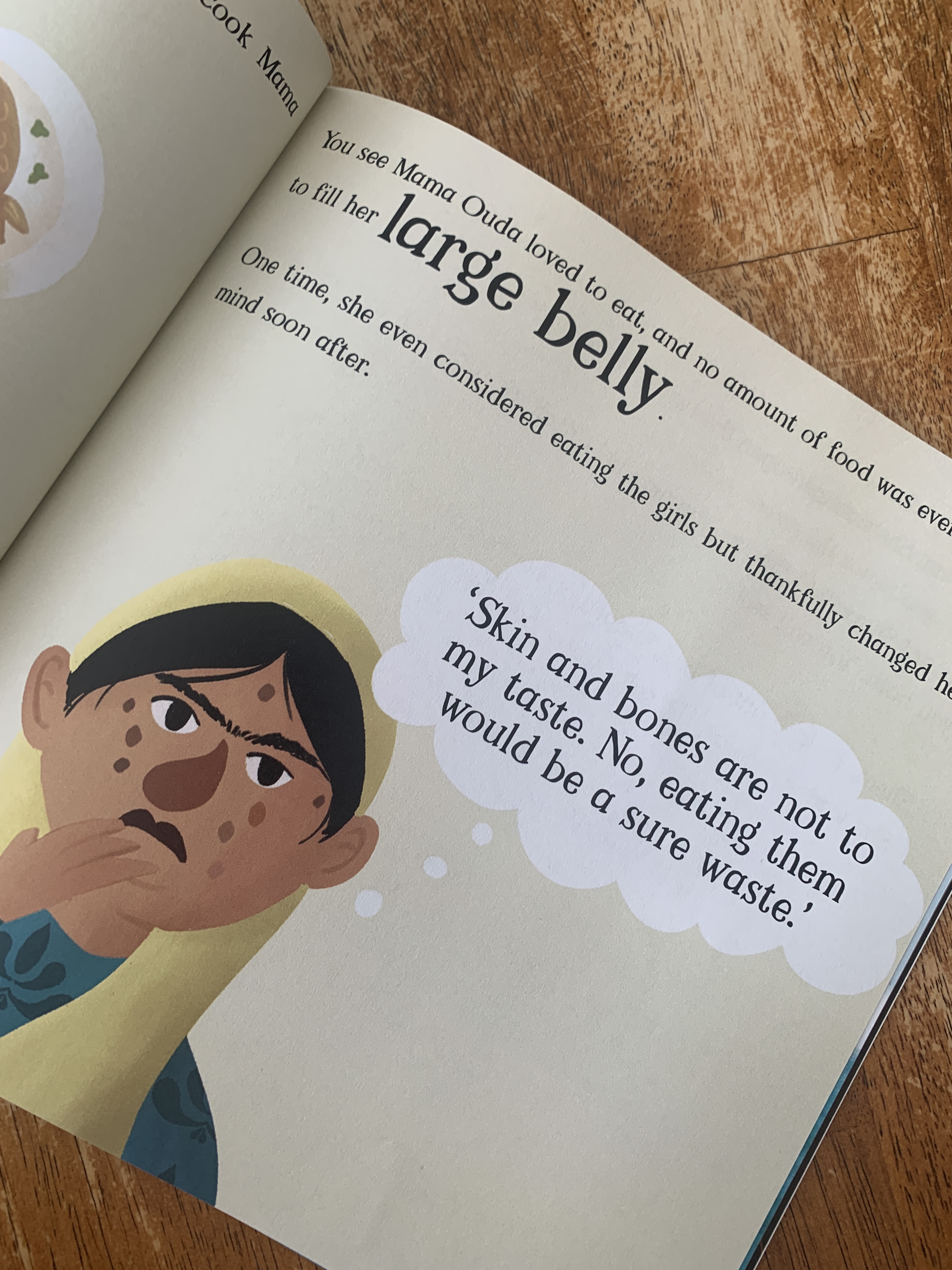 The next day Shems dressed as Shareefa recalls the fish’s promise near the water, and a basket of fish appears with pieces of sparkling gold. The girls eat like queens, hide the gold, and keep Mama Ouda fed. This carries on until they get caught and a murder and mermaid and moving out of their mud hut conclude the story and set up a potential sequel. 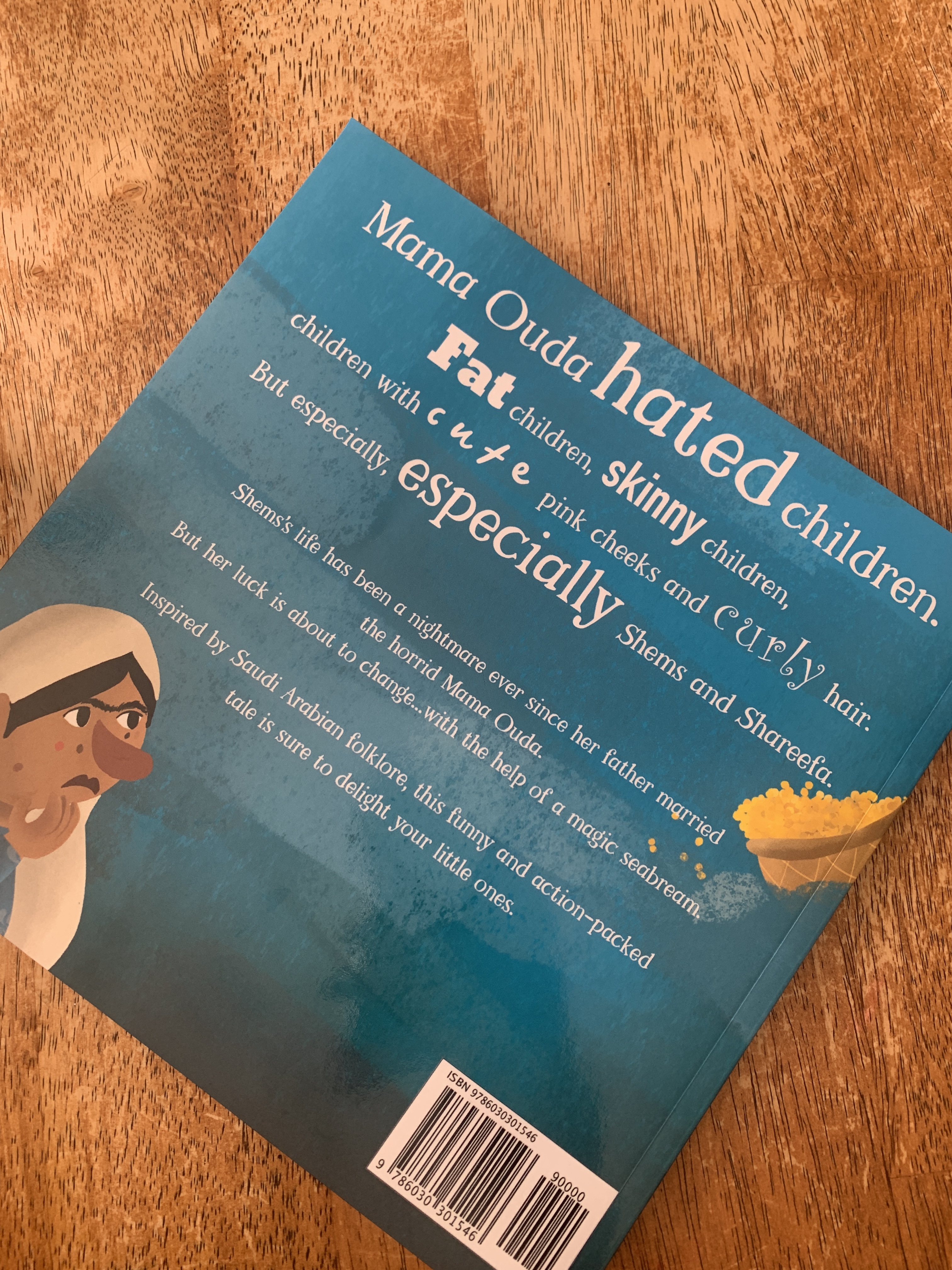 The dad is pretty clueless and that has its own negative assumptions to counter, but if you and your kids can handle the over the top darkness, the story written in playful rhymes is sure to entertain and be asked for repeatedly. (FLAGS: stereotypes about fathers and stepmothers).