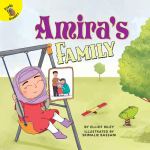 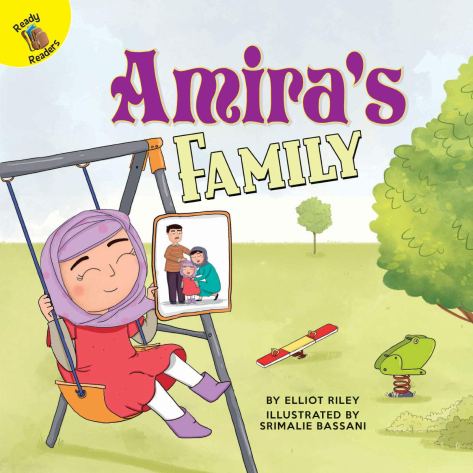 This 24 page, AR 1.5 book, is part of a series for emergent readers about different families.  The other books in the series focus on diverse family models, some that include a single parent, or lots of siblings, one in the series has foster kids, another adoption, one has two moms, so I’m not entirely sure why a refugee family is included in the group.  The family had to leave a dangerous home, but mom and dad and Amira, are not a “diverse” family structure, by the same definition used for the other books.  So, on its own it is nice to have a book for independent kindergarten and 1st grade readers, but as part of the collection, I find it a bit of a stretch.

The book is divided into three chapters, or sections I guess, perhaps so that early readers can gain experience with a Table of Contents at the beginning.  There is also a Picture Glossary at the end along with a page encouraging Family Fun and a bit about the author.

The book starts out introducing Amira, and her parents.  It then explains that they just moved to a new country, America, when a war started in their country.  It notes that Amira was sad to leave her home, and scared to move to a new place.

When Amira starts at school, the classmates welcome her and help her with the language.  It shows her teaching her language too, but it doesn’t look like more than random squiggles.  It then shows she likes recess and swings and slides, allowing the reader to see similarities with the character. 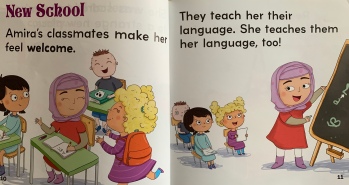 When the family goes shopping, Amira sees an American flag, buys it, and hangs it outside their home.  Amira loves her family and they love her, and it seems like they love their new home too. 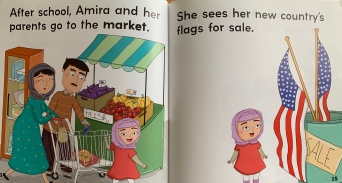 The illustrations are simple yet expressive, and show Amira and her mom in hijab.  It does not mention religion, or what country they left.

The story is basic, yet introduces young readers to the concept of refuges in a soft way.  It shows how the classmates are kind and the parents supportive of Amira.  I like that it also shows various emotions in the text and illustrations.

It might be making a bit of a political statement with the flag and national identity undertones, but I think it is a good thing to show that refugees can love a new country and be part of society, especially given the current climate toward immigrants.

I think the strength of this book is that it shows a Muslim character, and while meant for all new readers, Muslim children particularly will enjoy seeing themselves in a book they can read.  I’d check the library before buying the 8×8 paperback book, as it isn’t particularly memorable, but for the age group it serves a diverse and an inclusive purpose. 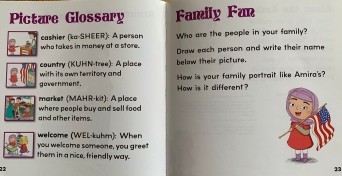