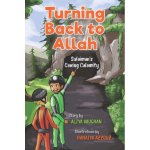 Good early elementary books can be tricky: the voice needs to read authentic, the lessons not preachy, and the scenarios relatable, all while not talking down to the reader or talking above their comprehension.  As fabulous middle grade books seem to be popping up at record speed, I find myself reading the same old books with my fourth child who is six.  Alhumdulillah, this book was nominated in the Muslim Bookstagram Awards 2021 competition and I was able to purchase and receive it quickly from Noura at Crescent Moon Store.  My son can read it, although because of the British terminology, he did better when I read it to him, none-the-less, he could explain it, he genuinely understood and related to the main character, and was emotionally connected to the outcome of the story.  The 49 page, color illustrated story is perfect for independent readers first or second grade and up.  The book also contains comprehension questions, etiquettes for du’a, a list of times and places when du’as are answered, and evidence for the story from hadith.  Additionally there are ayats from the Quran at the beginning and end of this well sourced book, alhumdulillah.

Sulaiman is getting ready for an overnight scout trip in some caves.  He is nervous having been stuck in his apartment elevators the summer before and being lost at a park with his family.  His stress has him being mean to his little sister, and his dad tries to mediate, but you can sense that their normal bickering is heightened because this is going to be hard for Sulaiman.  The scouts meet up to board their mini bus and Sulaiman is acting weird, he wants to sit by the window, he wants to read signs, finally he tells Jacob about his worries and the two boys agree to stick together like glue while they are in the caves.  Foreshadowing is set, and when Sulaiman’s batteries roll away and he stops to retrieve them he gets separated from the group and he will have to rely on his faith in Allah swt to feel less alone and brave what is to come.

I love that when Sulaiman is arguing with his sister he doesn’t have hadith quoted at him.  Sure it is ideal, but really, as parents we just want the bickering to stop most times and our kids to be nice.  It is often easier to instill morals and lessons in calm times, not in the middle of an emotional kerfuffle.  At the same time, when he is scared, he falls back on the lessons he has been taught from the Quran and sunnah.  I love how it reads realistic.  We want our kids to turn to Allah swt for all things, but sometimes to teach that we encourage them to seek Allah swt in times of happiness and times of hardship.  Sulaiman is scared, really scared, and he turns to Allah swt, and it is heartfelt and emotional.

I’m embarrassed to say, but I was a little confused by the being lost in a park prior story thread.  It either needed more detail, or maybe just more context, but I thought it was the same park they are heading to with scouts, then realized it was a completely separate park and incident, so I would like a bit more framing of that story line.  Also the stress of being stranded in the elevator, doesn’t directly connect to the rest of the story, perhaps bringing up some claustrophobia fears would have helped tie it all together.  As it is, it just seems that Sulaiman seems to be tested a lot and rather traumatically.

The illustrations being in full color and full page are a welcome surprise in the book.  However, there is one two-page illustration that shows the kids laughing before boarding the minibus, but it isn’t derived directly from the text, and I initially thought Sulaiman was being laughed at for his fears.  I went back, and it doesn’t seem that is the case, but I wonder if I was the only one confused by that illustration.

All-in-all the book physically is appealing to children with the open font, colorful pictures, size, and length.  The story is relevant, and the islamic tie-ins powerful, alhumdulillah.

Some teasing, possible bullying among siblings.  Some scary moments mentioned and explored: being stuck in an elevator, lost in a park, left alone in a cave. 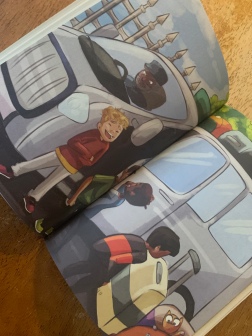 This would be a fun read aloud in a second grade class.