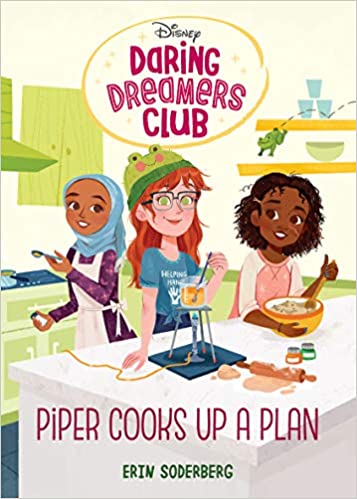 This is book two in the series, I couldn’t get the first book from the library, and I wasn’t willing to wait for the one that focuses on Muslim character, Zahra’s story to be published, it could be a few years.  At 224 pages this middle grades book is fairly formulaic with five diverse girls becoming friends, each book featuring one girl’s story with the others serving as supporting characters, and with the tie-in to Disney Princesses, I really didn’t expect much. Imagine my surprise when I found myself enjoying the characters and their lessons and struggles, sigh.  The book is sweet, the characters like-able, and the author really doesn’t try and force all the characters into every scene.  The book focuses on Piper and the other girls add to her story where it helps, they don’t all have equal time and it doesn’t get confusing because of it.  You can even read the books out of order.  Zahra wears hijab and her Islam is mentioned in a journal entry where she discusses the five pillars, the importance of charity, and getting dirty looks.  There is nothing preachy, but none of the other character’s are defined by their faith and I truly don’t know if I’m bothered by the singling out of Islam being her identity or flattered by it. 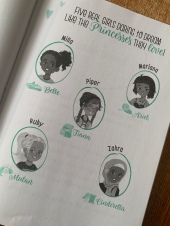 Five girls are grouped together at school in an advisory class to help prepare them for middle school: Milla, Piper, Ruby, Mariana, and Zahra.  Their advisor loves Disney Princesses and in their weekly journal entries has them write about their assigned Princesses as they explore their similarities and how they would tackle challenges, face fears, and the like.  The girls are diverse in family dynamics, race, religion, ability, etc.  Milla is African American with two moms and food allergies.  Zahra is good at art, Muslim, and likes to sew.  Ruby is a twin, her parents are divorced and she is great at sports.  Mariana is hispanic, and is an amazing swimmer.  Piper is Jewish, has dyslexia and loves to cook.  In the book she is struggling with school, while she excels in her food science creations.  She gets accepted to appear in a kids cooking show competition, but will need the help of her Daring Dreamer friends to prepare for the challenges about to be thrown at her during the competition, and to help her from falling behind in school.

Each girl has their journal entry presented in the book which helps to understand more about the different girls, as well as a little bit of introspection to the events happening in the larger story. 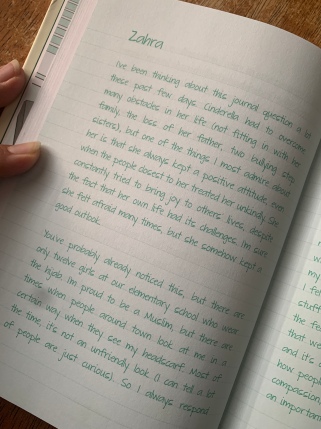 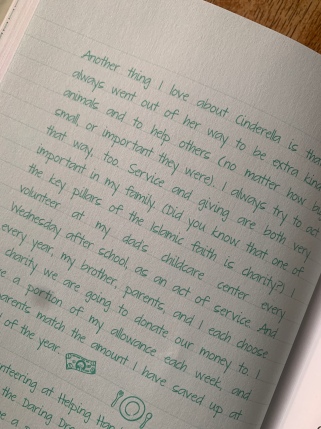 I like that the characters are really supportive, and the lessons aren’t so on the nose.  Piper isn’t just told that she doesn’t have to win the competition to have value, you feel it long before she accepts it herself.  Her personality really comes through and it isn’t for attention or for sympathy, she helps a competitor, there is no giant round of applause or moral reflection, she just helps.  I love that even though the story is Piper’s and her dream, there are larger issues woven in and felt, not necessarily preached. Piper is the middle child and feels she has to prove herself, she remarks on how being pulled out of class in early elementary school to get help has made it hard for her to ask for academic help now, the role of confidence and how charity and giving back is important, even while her own family’s financial situation isn’t clear.  I like the role of Piper’s siblings, they are quirky, but loving, and they work through their annoyances to help each other.  It is heartwarming.

I have my own mixed feelings about Disney Princesses, as a child of the 80’s, the 90’s brought all the glory of Jasmine, and Ariel, and Belle, and Mulan, and my friends and I definitely identified with different characters.  I may or may not have tied my hijab up many a days and claimed that I was Mulan in high school, but somehow with my own daughter I didn’t really bring the Princesses in to her day-to-day existence, I don’t think she has even seen all the movies, we read books (we didn’t even have a tv when she was little), she’s 14 now.  It had become too commercialized, I worried about the messaging more.  This book reminded me of what my friends and I as older “kids” channeled the Disney Princesses to be.  It wasn’t all about pink and sparkles, it was battling the bad guy, hanging on to your dreams, and persevering when things were tough.  This book channels those thoughts, it isn’t in your face Disney, it is more muted, and I appreciate that.  It is a solid middle grade read and I think an enjoyable one at that. 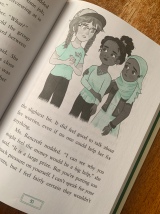 In this particular installment, there are no crushes, no holidays, no music, one character has two moms, but in this book, I don’t know that a casual reader would pick up on it. It says “Moms” once, it might be a bigger deal in the story that focuses on Milla, but I haven’t read it to comment.  There is lying and Piper tries to justify it, but I think it is clear and has its own resolution. 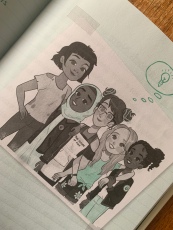 It is much too young for a middle school book club, but I think because it is such an easy engaging read, that in a home, or classroom, the book would be appealing to 3rd graders and up.