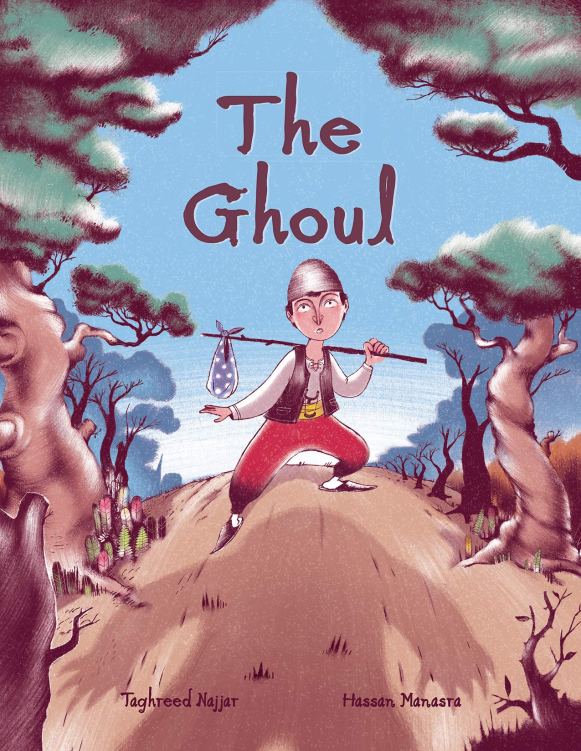 This 36 page book for ages five through eight is a cute story about being brave, facing your fears, challenging your perceptions, celebrating differences and giving friendship a chance.  Recently translated and published in English, this Arabic inspired folktale is timeless and important for readers of all ages to learn from. 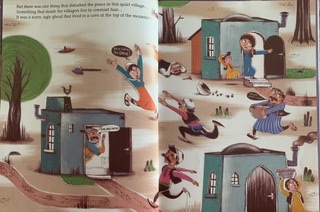 Hasan the Brave is a young boy that lives in a mountain village.  The children are told not to laugh out loud, the adults tiptoe to their fields, and the fear of being eaten by the ghoul that lives in a cave on top of the mountain consumes them all. 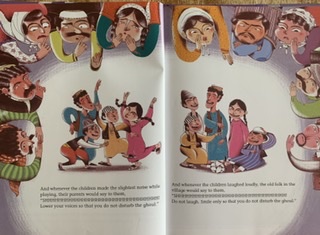 But Hasan isn’t buying it and starts asking questions. Why is everyone afraid of the ghoul, he asks his aunt one day in the olive grove? She tells him because he is covered in hair, has one eye, long claws, sharp teeth and his favorite food is little boys and girls.  Unconvinced Hasan asks his dad if anyone in the village has been hurt by the ghoul.  His dad can’t think of anyone.  He asks his mom if the Ghoul ever ate anyone in the village? She can’t think of anyone, but has heard plenty of rumors and wants him to not disturb the ghoul none-the-less. 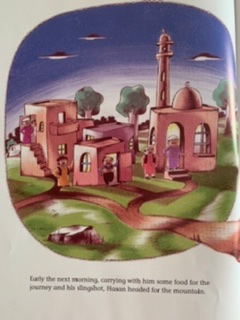 Hasan is tired of being scared and decides he will climb the mountain.  Everyone in the village tries to warn him against it, but he is Hasan the Brave after all and is determined to go.  When he gets to the top of the mountain and relishes at the beautiful view he proclaims that he is fearless and that he won’t be afraid of the ghoul.  Then he sees the ghoul, and after the ghoul sizes him up, the ghoul runs away. 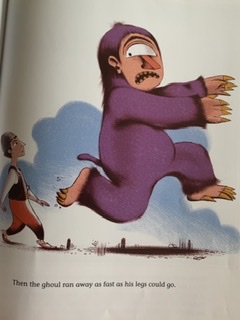 Hasan goes to investigate why such a monster is scared of him and learns that the ghoul is scared of people because they have two eyes instead of one, they do not have thick hair like him, they have strange hair, small teeth, and they eat ghouls.  Ghouls, Hasan finds out are vegetarians. 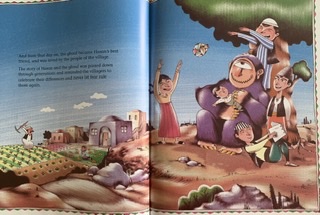 The two laugh at their assumptions, and run off to play together.  From that day on the two are best friends and the people in the village pass on stories to remind future generations to celebrate differences and not let fear rule them again.

There are a few women in hijab, the villagers say inshaAllah, but there is nothing religious in the book.  The illustrations are detailed and colorful in a muted manner.  Overall a fun book with a great lesson.