If you are looking for a comprehensive or somewhat detailed story about Prophet Nuh (AS), this book isn’t for you or your child.  If you want a silly story with hilarious animals to introduce your little one’s to the concept of the animals boarding Nuh’s Ark as a commandment from God, then order this book already!

This 24 page rhyming hardback 8×10 book written for preschoolers through early readers takes the idea of animals boarding Nuh’s ark and tells what it is like in a fictional account narrated by the animals themselves.  And focuses on a pair of confused koalas as to what is going on.

The poor koalas, are not prepared for rain and don’t do well in small spaces.  They pack too much and can’t keep up, but luckily the other animals are nice and they all work together until it stops raining and they can disembark on to land.

The pictures are cute and comical and bring the text to life.  With the conversation bubbles adding to the story, even the pages that are a bit text heavy keep the younger listeners engaged, as they know something funny is about to be said. 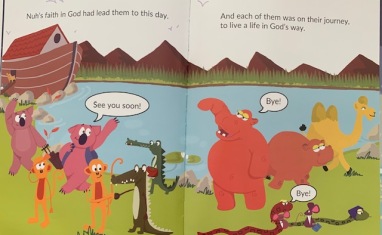 Also, the book is one in a series or three, so far, and the characters are the same ones found in the Adam and God’s Creation book as well (might be in the Ibrahim one too, but I haven’t read that one), making the nameless animal characters actually memorable as they say silly things, and are pictured being rather unique too.

The books do not use the word Allah, but do mention God, and the Arabic of Nuh, rather than Noah, and there is mention of why there is a flood and how long it will last, but nothing quoted directly from the Quran.

My older elementary and middle school kids found the books silly as well, and giggled their way through.  It is a a fun read that even adults won’t mind repeating.  If you want a more Prophet story retelling, Migo and Ali Love for the Prophets is a good non fiction book, and it, along with the three book Lunar Learners serious can all be found at my favorite supplier Crescent Moon Store.