The book may seem to be a lighthearted diverse read about a little girl comparing a beach in America to those of Iran, BUT there is also some pretty charged portrayals about gender divided beaches, religious police, and hijab.  I’m not saying this own voice book is exaggerating or saying anything that isn’t true, but it is an oddly belittling perspective to slip into a brightly illustrated children’s book with the words “ice cream” in the title.  The 40 page book for ages 4-8 is not one I would recommend for its negative undertones and dismissal of understanding another culture. 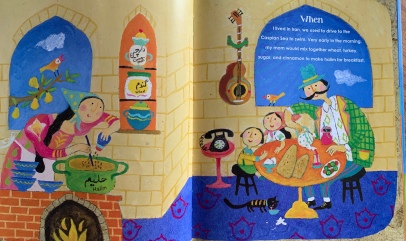 Rashin’s first trip to a beach in America has her and her family getting ready to go to Coney Island.   She remembers past trips to the Caspian Sea in Iran.  Trips where they would wake up early, her mom would prepare halim and they would drive through the countryside stopping for a picnic lunch.  Often her best friend Azadeh would come along and they would listen to Persian music and share kebabs.  On this trip they are going on the subway and there is diversity and music and excitement too. 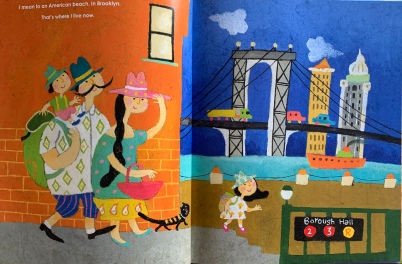 The next few pages detail and depict the curtain that would divide the women’s side of the beach from the men’s.  While the words say how fun the women’s side is and that even the ice cream vendor is a woman and the beach goers can remove their covers and get a tan, the inclusion of the Islamic guards with their aggressive faces and full black abayas and hijabs, is a stark contrast to the happy faces throughout the other pages. 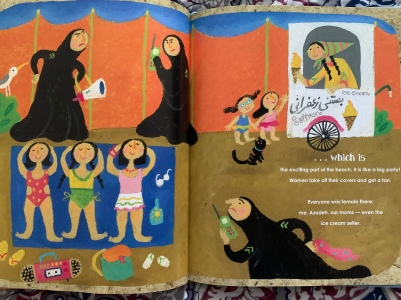 Rashin then recalls one trip where little boys poked holes on the men’s side to look at the female’s side. While it might be taken as silly to children, there is a lot to unpack with such “peeping,” the concept of respect and of covering.  It then seems to make the whole situation seem ridiculous by having the women covering themselves with umbrellas, newspapers and whatever they can find. 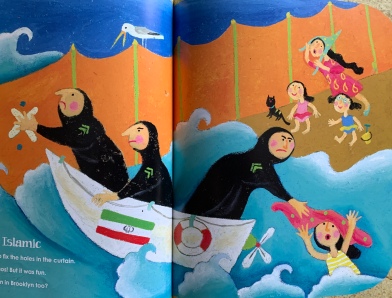 When Rashin finally gets to Coney Island, the ice cream stall doesn’t have saffron ice cream and another little girl suggests she try chocolate crunch, she concedes and discovers it is pretty good, and the beginning of a new friendship is implied.  She then asks the girl about the rules of the beach and the accompanying illustration has the Islamic police seeming to try and stop the fun. 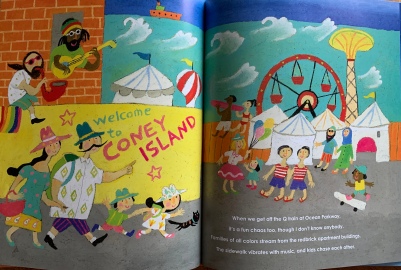 It is natural to compare new things to those that we know, but this book has a very strong negative, judgmental tone to what could have simply been presented as different without the criticism.  The author is the illustrator as well, so there wasn’t a divide in continuity.  I appreciate that there is a visibly Muslim family at Coney Island, but it seems too little, in a book very aggressively passing opinion on a religion and how it is “enforced.”

I find it rather disappointing that Scholastic chose to publish such an angry book masked in smiling characters and a trip to the beach.  It may be how life is in Iran, but I don’t know that a children’s book is the platform to air grievances without explanation.  This book does nothing to open dialogue and acceptance, it definitely would cause more harm than good.