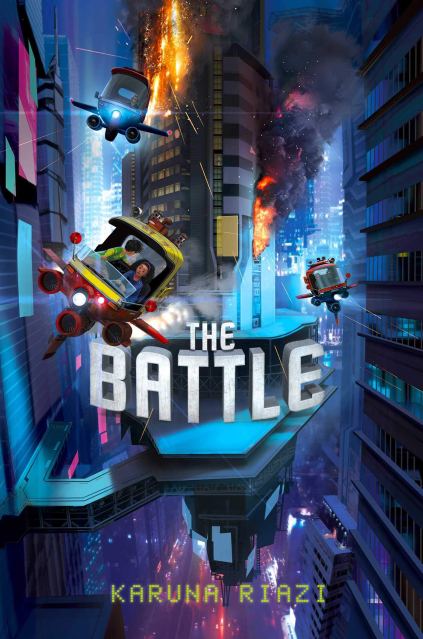 This claims to be a companion book to The Gauntlet, but it does rely heavily on details from the first to make sense of who some of the characters are as this book does little to explain them and advance their story.  In reality the book is very similar to the first book, but sadly not as fun.  I was disappointed in the 295 page AR 5.2 book, but my fourth and fifth grade boys enjoyed it as they had few expectations and the fast pace kept the book fun.

It has been four years since Bengali American Ahmad Mirza has left the game world, Paheli, with his sister Farah and her friends.  The old board game has been destroyed and the reboot focuses on a new video game setup.  This time around Ahmad is the main character and with his ADHD he finds himself getting in trouble a lot in school and desperate for a friend.  When a mysterious package holding a video game shows up and Winnie sticks up for him, things are possibly looking up. When all of New York freezes at the insertion of the game, however it clearly is not.  Winnie and Ahmed are off to battle the Architect and MasterMind to unfreeze their beloved city and escape Paheli.

Different battles and characters inch the duo closer to winning, but facing their fears and  being sidetracked by remnants of the last game trying to return make everything complicated.  Ahmed’s uncle returns to the game, giant mice try and help, crazy monkeys distract, and flying rickshaws populate the eastern inspired world filled with Bengali, and Arab references.

I love that it is a Muslim kid with some struggles at the helm, but there is really so very little character building that it ultimately doesn’t count for much in the long run.  Just like the first book, the characters are taken from the “real” world and transported to a game world and they must win the game to return home.  The book is fast paced and fantastical, but I constantly felt confused.  The challenges were disjointed, there wasn’t a clear objective, Ahmed didn’t recall being there before or that Vijay bhai had somehow come back with them, the mice help and then they are absent, and there wasn’t really a big reveal or explanation resolving any of it.  It felt all over the place and with little world building I didn’t feel like I could even picture what Paheli looked like, so forget feeling what the characters felt or imaging the intensity that that the game was running on.  It seemed like an updated version of the first book, but not done as well at all.

Pretty clean, some intensity, some fighting/battling, death, nothing detailed nor grotesque.

I think the book is great to have in a classroom or on a home book shelf especially if the Gauntlet was enjoyed, but I wouldn’t use it as a book club book because it doesn’t offer much to talk about.  There isn’t a cathartic release or even an under current of family and friendship and loyalty, it really is just surface level story telling.