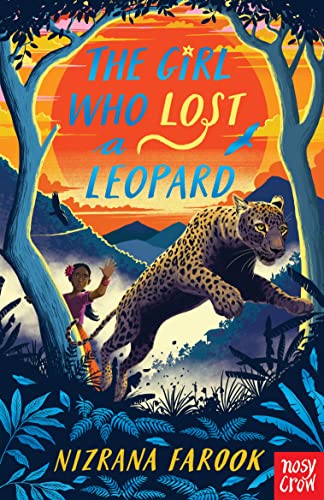 This stand alone middle grade read by Muslim author Nizrana Farook is similar to her first two books about an elephant and a whale in that it is set in Serendib a long time ago and revolves around a beautiful wild animal and clever, endearing, determined young children. This actual story is an easy read at 203 pages (the end of the book is the first four chapters of one of her previously published books).  I think seven and eight year olds will enjoy getting to know Selvi and the beautiful leopard Lakka that she considers a friend.  For me the ending took an odd turn that seemed out of place, but up until then I was enchanted by the lush imagery, sheer determination, and sweet friendship shared within the pages.  The main character is not Muslim, but presumably some of the side characters are with names such as, Amir and Salma.

SYNOPSIS:
Selvi and her mother live in a small home on the mountain.  Most days she runs wild with a golden leopard she has named Lakka.  She keeps her distance, but there is a pattern to their interactions, and when Selvi’s mother finally allows her to go to school, and she finds the other children unkind, Lakka becomes her only friend.  One day poachers are on the mountain hunting not just any leopards, which are protected by the queen, but the rare golden one that is often seen in the area, Selvi tries to interfere.  And before she knows it, they are after her.  She hides near a home, and when the poacher’s come looking for her, she is at the mercy of Amir to lie and say he hasn’t seen her.  Amir is a classmate, a mean one, but he has seen her before with the leopard, and suddenly Lakka is not so alone.

Between making friends at school, battling her uncle’s rules to start behaving more ladylike, and keeping a leopard safe, the adventure is fast paced and the story entertaining.

I love kids outsmarting adults and saving the day, it makes for good story telling.  I don’t want to spoil the ending, but I really felt like it was forced.  I truly do not understand why the children needed to take a drugged Lakka to the port and back.  Why not leave him with the new friends and go to the port without him? He is a wild animal, we have been given reasoning for so much of the human animal interactions to be believable, that this seems to be negligent.  So much could have gone wrong and for what? There was no need.  The kids wanting to see punishment handed out is motivation enough for them to make the journey in my opinion.  Sigh, I don’t know that younger kids will be as bothered as I am, but I think fourth graders and up will definitely question it and be confused.  I also don’t know that I have ever seen the sneak peak of another book included at the end, being for a book previously published.  Aren’t they usually for upcoming releases? Either way, it seemed to make the last portion of the book deflate a bit for a story that was engaging, entertaining, and hard to put down until then.

This would be a fun read aloud in a classroom or at bedtime.  The short chapters have little illustrations above the headings that hint at what is to come, and the writing style is perfect for short blocks of time.

The book is available on Amazon