This graphic novel retelling of the classic, Count of Monte Cristo, is for middle school readers and up and is by a Muslim author and illustrator. There is nothing Islamic or cultural in the text of this 136 page sci-fi twist, and there is some kissing, a whole lot of killing, brutality and violence, but I think the swashbuckling tale will appeal to early teens and adults who enjoy fast paced reads whether they have read the original tale or not. 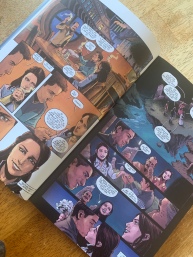 Commoner Redxan Samud is elevated to Captain and marries his beloved, the first few pages of happiness, however, quickly disintegrate as he is framed and wrongfully imprisoned by the jealous powers that be.  Life in the hovering prison are barbaric, but the meeting of Aseyr, provides him with a plan and means to move forward.  First he will have to survive the death battles in the prison, escape the inescapable fortress, before he can locate the Isle of Sorrow, take control of ARU and extract his revenge.  Oh, but his revenge is strong, so very, very strong. 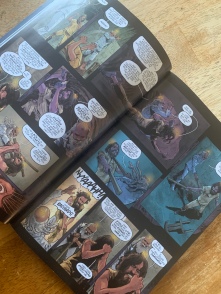 I was admittedly hesitant to give the book a try, but when writer Shireen Hakim sent it to me, and my kids saw it, I thought I should read it first before letting them dive in.  I read it in one sitting, the story is engaging and clear.  I never was confused with who was who and why something was happening.  At times though it seemed too quick and that details were glossed over, or impact was minimized because major plot points were not given enough time to be felt.  I would have liked some answers provided of basic logistics and of character’s getting from one place to another, and how plans came to fruition shared in the story.  Additionally, some fleshing out of situations to ground the story a bit and make the revenge and extraction of revenge more cathartic, would have elevated the book and made it a popular choice in my house to be reread again and again.

TOOLS FOR LEADING THE DISCUSSION:
Not a contender for a book club read, but I would shelve it in a middle school classroom and in the school library for graphic novel and comic book enthusiasts as well as for high school students who might be familiar with the classic it references.