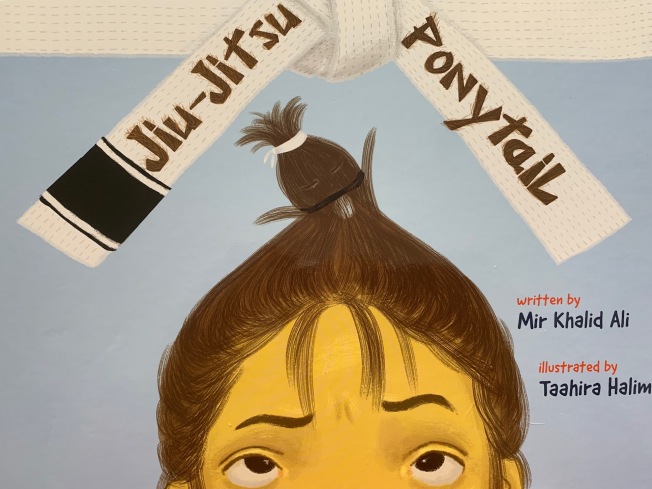 A determined girl battles her ponytail, her own self-doubt and her opponents on the jiu-jitsu mat in 38 beautifully illustrated pictures and clear every day language.  Perfect for little girls and their dads ages five and up. 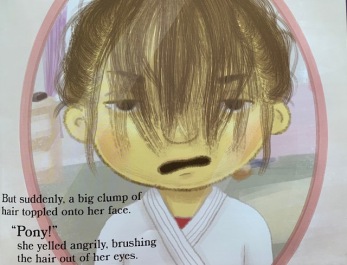 Noor has been counting down the days until her first jiu-jitsu tournament, but the morning of the tournament a battle first takes place between her and her unruly hair.  Determined to tame it on her own, even when her father offers her help, she steps on to the mat for her first fight.

Squirming with nerves, her ponytail breaks free from the desperate tape used to keep it contained and covers Noor’s eyes forcing her to tap out and concede the match.

Walking off the mat, Noor’s Baba hugs her and compliments her on her bravery.  Noor is having none of it and just wants to go home.  Rather than argue with her, Baba goes to talk to her coach giving Noor some space to battle her self-doubt on her own.

Deciding she has worked hard and trained hard, and been supported every step of her way she asks her baba to help her tie up her hair.  Together her and her jiu-jitsu ponytail take on the remaining opponents and persevere.

The book shows great heart in the supporting cast each of us have around us, in this case the father takes his cues from his daughter, never wavering in his support, but not forcing her to do anything either.  The little girl is determined, but also learns that it is ok to ask for help and above all to not give up on yourself.

The personification of the ponytail adds a layer of humor to the story that works well for little kids that might just take the story on face value.  Even they will learn something about jiu-jitsu with the visual displays of the different moves and of martial arts tournaments in general.  Two of my children thought the ponytail hilarious, and two slightly creepy.  The subtlety of its personification allows its role of being a separate entity and just feeling like it has a mind of its own to be determined by the reader. 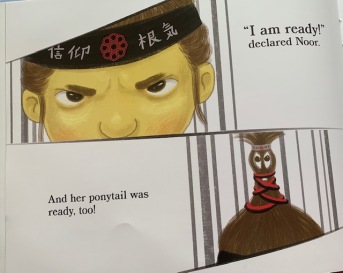 There is nothing Islamic in the book, but the author and illustrator are Muslim, and the use of the little girls name, Noor Kareem, and her calling her father Baba will have a special appeal to Muslim children (plus her name written in Arabic on her bedroom wall), just as children who do jiu-jitsu will find themselves in the pages.  The book appeals to all children and reminds them they can overcome and inshaAllah be supported in the process.

The illustrations in this 8 x 10 horizontal hardback book are beautiful and detailed.  They allow the reader to understand what is going on without the book being overly burdened with text.  The font is clear and well sized making the book ideal for both bedtime and story time, alhumdulillah.