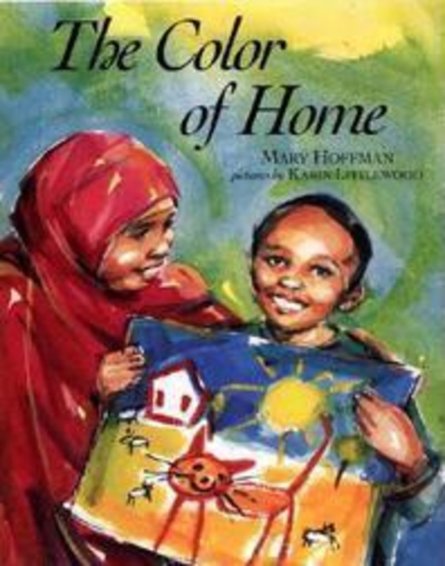 This powerful book about Hassan’s first day at school is a bit graphic, and incredibly important.  While it is a picture book, it is definitely not meant for small children.  The rich water color illustrations and the impactful text match the AR level 3.6 and would really appeal to thoughtful 2nd through 4th grade students.

A refugee from Somalia, Hassan finds it “tiring remembering even a few English words.”  He misses the color of Somalia, his cat, the warmth of the sun, and the freedom of learning out doors.  He doesn’t miss the violence though.

When it is time to paint, Hassan paints his home and his family, all 9 of them, and his pets, in bright happy hews, much to the delight of his teacher.  But then, Hassan, engulfs his house with the red paint of flames, smudges out his Uncle Ahmed when the black bullets that take him down, and Hassan communicates his sadness to his teacher.

Hassan doesn’t take his picture home, he knows it will upset his mom and little sister, Naima.  The next day, a translator comes to help Hassan.  Fela is Somali and wears a black hijab, like Hassan’s mom, but western clothes, a new concept to the young boy. 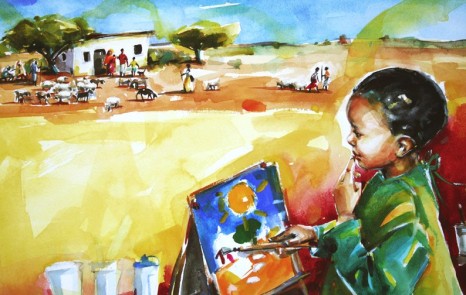 Through Fela, Hassan opens up to his teacher and explains what it was like when the soldiers came and he had to hide under the bed.  How they had to leave without any of their stuff, including his beloved pet cat Musa.  All they could take was his father’s prayer rug and the Quran, as they set off on foot in the night.  He tells about leaving his grandparents and cousins behind and being scared on the plane.

Being able to share his fears, seems to help as he paints a new picture to share with his mom.  This one filled with his animals, and not with fire and bullets.  There is hope for Hassan as he looks forward to adding color to his new life and reminds himself to learn the english word for “home.”

The book  is great for seeing the experience through Hassan’s eyes, and taking the reader through some of his adult like fears, and childish stresses.  Older kids should appreciate that what he has lived through is horrific, but his understanding as a child is slightly limited.  It should increase empathy, compassion, and kindness.

While the illustrations are rich and detailed they are very realistic.  This adds to the somberness of the book, and keeps this work of fiction a very real reminder of the world and what trials so many go through.

The characters are visibly Muslim, but there is no mention of religious doctrine, and readers may not know what a prayer rug is or a Quran.  They will be able to use context clues to figure out hijab, but there is not a glossary in the back.