I had hoped to have a handful of selections to review for Black History Month, but alas I started too late in collecting titles, inshaAllah next year I will be better organized.  I did want to share this beautiful book though, as a great story of hope and love, that I don’t think is often included when we study Malcolm X or talk about him today.  This is the story of his parents and the philosophy of equality they tried to raise him in before hatred and bigotry destroyed his family, before he went to prison, before he became “Detroit Red,” a member of the Nation of Islam, before he became a civil rights leader, a Muslim, before he became Malcolm X.  This is a story, based on love, written by his daughter to give children of all ages something to think about. 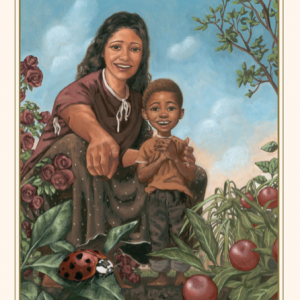 The story of Malcolm Little, is a story that I feel cannot be rushed, it is very heavy in text and at 48 pages, the warm beautiful pictures make it accessible in pieces to younger children, but it is written on an AR 6.5 level (sixth grade fifth month).  The book tells about how his mother and father met, believed in universal equality and justice, and started a family where these values took center stage.  The family suffered for their beliefs and their home was burnt down, but they rebuilt and the family continued to find strength and see the power of possibility.  The books shows the lessons taught in everyday activities such as raising a garden, doing laundry, reading books, doing homework, and even fishing.

When Malcolm’s father was killed, however, and his mother taken away, the family was forced to separate and Malcolm to deal with an unwelcoming world, more or less alone.  The book ends with Malcolm in 7th grade so, to young readers who have maybe only heard his name in passing the book is full of hope and roots for the man he would become.  It is almost a fairytale start to a man who would be cut down in his prime years later.  They will understand how unfair society treated his family, how warm and educated and strong his mother, Louise was, and how inspiring his father as a preacher was. The takeaway will be how Malcolm’s upbringing and personality allowed for him to rise up and refuse to stay down during horrific events in his life. 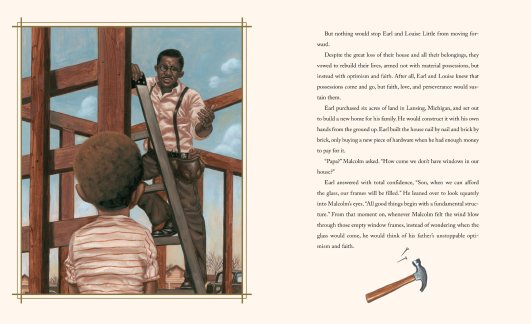 For older elementary and middle schoolers it is a story of possibility, of how quickly things can change, and the effect of hate.  They should also see how institutionalized and normative the oppression of African Americans was and how it really wasn’t that long ago.  When Malcolm’s English teacher Mr. Ostrowski tells Malcolm that he as an African American should not have such high expectations, readers should realize that the acts of the Ku Klux Klan may be viewed as “extreme” but society as a whole was systematically enabling such bigoted acts.  The lessons passed on to Malcolm by his parents are universal themes of hope and love and equality that still have to be stood up for today, and even young listeners can grasp that, and also grasp that because of their skin color alone they were seen as second class citizens.

The book shows depth to a historical character that gives some insight to what made him so dynamic.  Many young readers will be surprised at how quickly Malcolm’s world unraveled, and some of the reasons why, while empathizing with the injustice of it.  The Author’s Note at the end is also fascinating as it details the family members and their stories about the characters in the book.   I liked the softness of the book and the smaller lessons for children that it presented.  It didn’t shy away from the violence and prejudice that the Little family faced, but presented it through a lens of optimism to hopefully inspire children to carry on with the social activism that still needs to be done.