This 44 page fictionalized retelling of Queen Goharshad, a 15th century monarch of the Timurid dynasty in Afghanistan should really be a larger book than 8 x 8 to appreciate the artwork that is detailed and stunning.  The story of Goharshad, wife of Emperor Shah Rukh, and her influence on art, music, culture, higher education, and architecture, is one that we should be more familiar with, but the actual text and manner in which the story is conveyed isn’t consistent for me and I wanted more details about the society she stepped in to to rule,  I know it is fiction, and meant for 2nd to 4th graders, but I would like to think that readers will want to know what obstacles she had and what support she enjoyed and from where.  That they will question if it was a rich kingdom that she could pay musicians to play everywhere, and wonder if families sent their daughters to the University she built, ask why it wasn’t for women to design a  Masjid, and what was the name of the smaller mosque that bore an older woman’s name? The book at times overly summarizes and at other times is haltingly detailed.  It is a good read to reflect a strong woman and her influence on her land, but unless assigned, I don’t know that seven to ten year olds will pick up the book and be inspired by it enough to change their perception of the Afghanistan that they may see on the news.

Seven centuries ago Goharshad loved beautiful things such as painting and the texts of Rumi.  Her brothers played at being like Genghis Khan and teased her for not being brave.  She vowed to be brave with beauty even though she didn’t know what that even meant.  At age 14 she was given in marriage to the king, Shah Rukh, in Herat.  She ruled with her husband and had resources and time to spread her beauty by speaking up and being brave.

Her first act of beauty was by filling the kingdom with music.  She wanted music every day in the court and beyond. Music that was playful and pious, music that painted pictures in the listeners minds and brought joy like the laughter of God.  She next sketched and designed a beautiful and enchanting garden to be built.  It doesn’t say where it was, but that people came from all around to enjoy it. 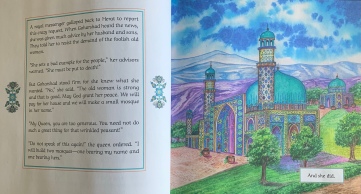 Feeling braver she turned her sights on building a mosque in the western city of Mashhad.  She designed it and called the court architect, Qavam al-Din Shirazi to discuss.  He doubted if it was right for a woman to design such spaces, but she assured him that she had the talent for it, so construction began.  An elderly woman refused to sell her cottage for the new project unless a mosque with her name was built.  The advisors wanted the old woman put to death or imprisoned, Goharshad disagreed appreciating the woman’s strength and instead agreed.  The big mosque was built with Goharshad’s name and a smaller one on the property with the old lady’s. 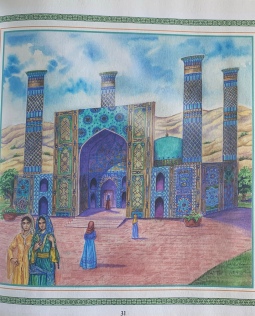 With such an accomplishment complete, the Queen again summoned the architect and expressed her desire to build a great center for learning.  A college for girls, a grand mosque for prayer, and a vast library.  She wanted the structure decorated with paint from precious stones and sold her crown to finance the project. 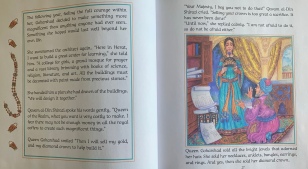 After her husband died Goharshad reigned, but sadly after she died, much of her accomplishments died as well.  Over time, harsh weather and war, nearly all her buildings disappeared and those that remain, do so in ruin.  The book ends with hope that memories of her will endure, A guide to some of the words in the story,  an Author’s note, and a Guide for Parents and Educators.

There is not a lot of Islam in the story, just the building of masajid .  Some may take issue with her stress and celebration of music, and likening it to God laughing, but if you look at it as her story, it should be able to be appreciated even if you disagree.