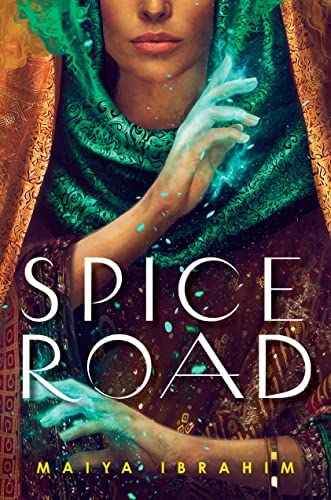 I have no idea if the author identifies as Muslim. I saw the 2023 YA book described as a Middle Eastern fantasy, characters with Arabic names,  djinn representation and possibly a hijab wearing protagonist on the cover, so I requested an advanced reader’s copy, squealed with delight when I got approved, and happily fell into the 464 page world of The Sahir and Kingdom of Alqibah.  Their is no Islam in the book, it is not a hijab, but I’m sharing it here, not just to let readers know it isn’t Islamic rep, but to let them know that for the genre it is pretty clean, and the story is an engaging easy read.  At times Imani is whiney and annoying, but she has a developed arc, and the book has a few slow patches, but nothing that lasted long enough to tempt me to give up on it.  I think 14 year olds and up can handle the three brief kisses, the sexual assault that is thwarted, the lusting glances, the killing, the potential addiction, and the commentary on colonizers and oppressors.  It is the first book in a series, so this review is only for this book and not an evaluation of the rest of the books that perhaps are not even written yet.

In Qalia, the Shields protect their community from monsters with the Spice entrusted to them, misra, that magically empowers affinities in them.  The top Shield, Imani, has an affinity for iron, and with the support of her powerful clan she exists in a world of privilege and opportunity.  When her powerful brother, Atheer, is assumed dead after stealing misra and suffering from magical obsession, the family’s reputation is not as pristine as it once was.  Imani’s younger sister, Amira, is also keeping secrets as she is caught stealing, skipping school, and refusing to follow family orders and country laws.  When the two girls find themselves following Atheer’s horse into the forbidden waste, they learn that their brother might not be dead and that there is more to their world than they ever were allowed to know.  With desperation to learn more about her brother’s location clouding her judgement, the Djinni Slayer, Imani, bonds with Qayn, a djinni who claims to not only know Atheer, but to have been his close friend.  Imani scrambles to know what to do, and seeks out answers and permission from Council, that results in her and three other’s heading off on a rescue mission to the Kingdom of Alqibah.  Everyone’s orders, however, are not the same, and first they must survive the desert, the monsters, and each other if they are to find Atheer.

I love  that the world building is not at the expense of character development.  The single linear story line does mean that at times side characters are seemingly forgotten, but the focus of the world through Imani’s eyes allows the gaps to be overlooked as her concerns and priorities take center stage.  I love the emphasis on family, it is sibling love that is motivating the protagonist and closeness to an aunt that allows for privilege and opportunity. The romantic threads and tangents never overshadow the familial importance- it isn’t a forced obligation it is very warm and it is nice to see and feel the truth in the characters approach to family.  I love the Arabic names, foods, and while my electronic version did not have a map, the author has one on her Instagram page that suggests the physical book will have a map.

I love that the book discusses colonizers and oppressors.  It may be fiction and fantasy, but there are some very real themes included in fleshed out way that would allow for a lot of deeper discussion and connections to be made. The book is well polished, I don’t know that it reads like a debut, which is always a good thing I suppose.  At times Imani is really unlikeable, but fortunately it doesn’t last too long, same goes for Amira and her bouts of childishness juxtaposed with her glimpses of maturity. Taha, is noted to be very different depending on the company he keeps, so while frustrating- it seems to be intentional. The only real hiccup I felt in the book was understanding how at times the language differences were such an obstacle and how at other times Imani could read the graffiti and be understood.

I don’t know that I would pick this as a book club read, but I would definitely shelve it in a class, school, or home library.  I think it is a fun read for teens and up and I look forward to the rest of the series.  The book releases in January 2023 and as always presales are the biggest way to show support to authors and titles.  You can find the book here.