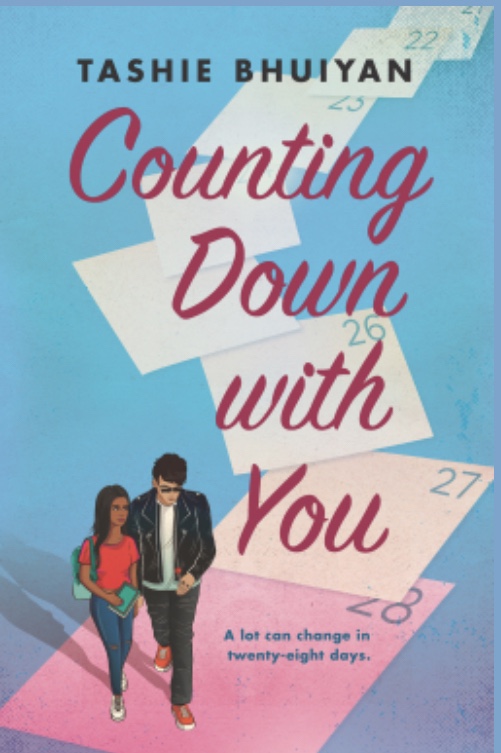 I have to be honest that this book really held my attention and was hard to put down for about two-thirds of the 416 pages.  I was genuinely invested in the characters and wanted to see how it all resolved.  Sadly, by the end, I was disappointed with the conclusion, the predictability, the stereotypes, and the cliche’ of it all.  The author mentions in the forward that she is representing her story, not a representation of all Bangladeshi- Muslim American girls, but for an OWN voice book with such a clever premise, I really wanted to be shown more than I was told, I wanted to feel the protagonists strength, and cheer her on as she found her happiness on her terms.  But alas I felt that she let other’s fight her battles and she really only threw her religion and culture around as weighted plot oppressors, not as strands of her life that she had to decide to embrace or understand in the process of growing into herself.  There was a lot of potential to discuss mental health and family expectation, but the end unraveled all that the book could have been.  Undoubtedly the author is a good writer, and brown Muslims are not a monolith, but I feel like sometimes we need to square away who we are before we just clamor for what we want.  This book has relationships, it is a romance novel afterall, but whether the characters are straight or LGBTQ+, there isn’t more than kissing and hand holding and would probably be fine for 9th grade and up if you are ok with a Muslim lead lying to her parents and having a boyfriend.

Karina Ahmed is 16 and expected to be a doctor when she grows up.  Her conservative Muslim parents are immigrants from Bangladesh and very over protective of their oldest child.  Samir her younger brother, a freshman, is a robotics nerd and the pride of their family.  Karina loves English and wants nothing more to major in English in college, but her parents are insistent and despite her struggles with math and science she is determined she has no choice in the matter and must make them proud by being a doctor.  This inability to be what her parents want has caused tremendous anxiety within Karina and when her parents leave for a vacation to Bangladesh for a month, she is hoping to be able to relax and enjoy life for 28 days with her Dadu, paternal grandma, and her friends, Cora and Nandini.

The only extracurricular activities Karina is allowed are Pre-Med Society and tutoring, where she helps others with English.  Her teacher asks her to tutor a classmate one on one to prepare for the end of the year exams, and reluctantly she agrees.  Very reluctantly.  The classmate is brooding resident bad boy Ace Clyde, a beautiful slacker that seems to not care about much.  In Karina’s efforts to get Ace to study and taking advantage of limited parental supervision, Karina goes with Ace to a sweetshop and even ends up at his house where she meets his family.  Ace is not ready to admit to his incredibly wealthy family that he is seeking help from a tutor and instead introduces Karina as his girlfriend.  Ace’s older brother Xander, the Student Body Class President, isn’t buying it, so Ace announces it on social media and shows up the next day with coffee for Karina as he walks her to class determined to convince everyone that they are indeed a couple. Karina is not ok with this, but he does promise her a dozen books a week and he is aware that the “relationship” can only last 28 days, so she is in.   Karina’s friends predict that they will fall hopelessly in love and they are pretty correct.  Over the course of the next three and half weeks the two grow closer, he even comes over and spends time with Dadu and Samir.  She encourages him to fix his relationship with his family, and he encourages her to fix hers.  And somewhere in the midst of pretending they decide to make it real and then Karina’s parents return.  She at this point has been cheered on to stand her ground on confronting them about not wanting to be a doctor by Ace, Cora, Nandini, Dadu and Samir.  The conversation does not go well and Karina goes into a two week slump pushing everyone out before she *spoiler alert* resolves to date Ace in secret as long as he respects her lines, and Dadu stands up to her parents for her.  The story concludes with her going to Jr. Prom and her resolved to just stay strong for a little while longer until she is “free.”

I like that I really didn’t know if the book would turn cliche until it ultimately did.  I really liked the realness and rawness of Karina coping with her anxiety and her friends supporting her in Googling coping mechanisms and helping her test them out.  I feel like it was a missed opportunity for Karina’s parents to not reach out to her, or for Karina to even mention that they were missing it.  I think readers that see themselves in Karina would have hoped to see that story thread play out and give them hope of getting help and support or at least getting it out in the open to normalize it.  I love the growth of Samir once Karina make him aware of the double standard, but I feel like he doesn’t read with a consistent persona.  He has a job, he has friends, he likes a girl, but he reads like he is clueless and maybe 10 years old at best, not in high school.  A bit off for me.  And of course you have to love Dadu, a wise old woman who supports her grandchildren and sticks up for them.  I wish Karina would have taken her cues from her beloved grandmother and stood up to her parents with Dadu in the room rather than let Dadu fight the fight and just stand there.  I thought the big climax would be Karina standing up to her parents, so I felt let down when she let someone else fight her fight.  Yes Karina tried and failed, but I think her grandmother should have backed her up in round two, not taken over.

Karina throughout says she is Bangladeshi-Muslim and uses it as a reason to fear her parents and feel obligated to not date or study English.  She does say she isn’t against religion, and actually likes being a Muslim and praying and knows Allah loves her, but that it is the tradition that blindly is followed that gives her trouble.  Her maternal grandfather is an Imam and her mom is much stricter than her father, but he follows her lead in raising the kids.  My critique isn’t so much to argue with the author’s perspective about religious standards, but more a literary one, when the character says she is Muslim and uses that to reason why she has lines, but yet is never seen praying or wresting with what she wants and what she believes.  Never asking Allah for help with her anxiety or confronting her parents or anything for that matter.  As soon as her parents leave she is in a crop top, so where is the religious line and where is the cultural one?  Where is her understanding of her culture and where it fits in her life and where she wants it to fit in her future? Is she Muslim because her parents are or because she believes it? She won’t eat ham, and eats halal, but later eats meat at Ace’s house? Everyone, even fictional characters, get agency, but in a book where the premise is a fake relationship turned real turned rebellious because of religion and culture, a little introspection seems warranted.

The conclusion after hundreds of pages of being called lionhearted and brave and strong seemed diminished when going to prom and lying to parents and having grandma fight your battle is the happy ending.

I don’t think I would do this as an Islamic School book club selection because it would imply agreement with lying and going behind your parents backs.  Granted her parents are difficult and her grandma is aware and ok with the situation, but I still think it would send the wrong message to endorse such behavior from a religious school perspective.