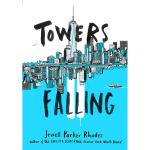 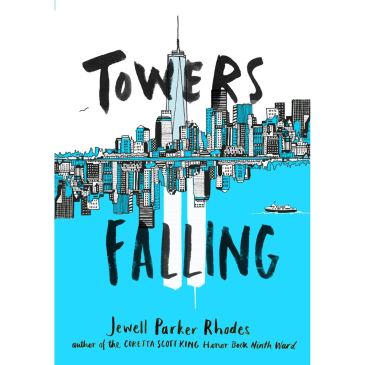 I realize the inherent difficulty of writing books for middle grades about the events of September 11, 2001: the author lived through it, the readers did not.  Yet, it seems like at some point a book regarding it, will just feel right, and I don’t think for this age group, I’ve found it yet.  This AR 3.3, 228 page book is a quick read, and while some of the characters have spunk and personality, a few of the storylines seem incredibly forced and the overall timeline and holes in the story will be ultimately disappointing for most readers.

Deja is starting a new school now that her family has gotten a room at a homeless shelter.  Immediately her fifth grade classmates are given an assignment about home, with the end goal that eventually this project will transform in to being about the change of New York’s skyline fifteen years ago.  The details regarding the attacks of September 11, are not given forthright and as Deja knows nothing about the attacks, and the fall of the towers, her inability to get answers adds to her frustration at home and school.

Deja is angry as she bares a lot on her young shoulders.  Her dad can’t hold a job, and his moods and ill health put caring for her younger siblings on her.  Her mom works as a waitress and is always tired.  They lost their house, lived in their car for a while, and now occupy one room in a shelter.  Deja refuses to lie about her home life and thus her aggressive attitude is always on guard.  Another new kid, Ben, joins the class and he and Turkish American popular girl, Sabeen, all quickly become really good friends.  Each have something brewing beneath the surface that they are dealing with, but their friendship helps them cope and bonds them together.

As the trio of kids work on their projects together, Ben finally shows Deja online footage of the attacks and clues her in to what everyone else in their Brooklyn class seems to know and has failed to tell her.  Deja links her father’s declining health to that fateful morning and decides she needs to go to Ground Zero and get some answers.

She doesn’t really get answers, but at least it is the catalyst for an overdue conversation with her and her father, and hopefully a start on the road to healing the family rifts.

Much like the book Nine, Ten there seems to be the token Muslim girl in the story to offer her perspective on the Islamaphobia that occurred after the attacks.  In this case Sabeen doesn’t detail anything specific happening to her, other than a clerk at a store telling her to go back to Saudi and her uncle getting screened regularly at the airport.  Of all the characters I feel like Sabeen gets the short end of the stick.  She is incredibly flat, stereotyped and undeveloped.  Her family is Turkish, she is wealthy, her mom wears niqab and they are all overly kind and sweet, which is great, but when Deja goes over for lunch, they ask her if she prays, which seemed so random and off to me.  A lot of the basics about the character the author got right, she says that the terrorists were Muslim, but they weren’t, sharing a sentiment many of us Muslims feel. She wears hijab, and takes it off when she gets home.  I don’t like that the mom speaks English, Arabic and Turkish, but is first introduced having Sabeen translate for her with another parent.  Seems incredibly pretentious and misleading.  Ultimately her storyline is just overly forced.  She has to leave Ben’s house when they talk about September 11, because she is so affected by it.  She wasn’t even alive when it happened, and I get that when it is discussed us Muslims are on guard, but the author makes it seem like it is her whole world and influences everything around her.  If you live in New York, especially, I’d imagine at some point you’ve had to come to terms with it, no?

That’s why I also struggled with Deja’s dad.  He is so debilitated by the events of 9/11 he can’t function, yet they happened 15 years ago, presumably before he met Deja’s mom and they started a family.  So, really she fell in love with him in his current condition and thought having three kids with him was a good idea? He was fine and then wasn’t? For 15 years he hasn’t been able to get some sort of help for his PTSD type symptoms?  Seems like a stretch in the timeline, and one that is hard to excuse even for 3rd and 4th graders.

I really like how Deja’s homelessness is brought out and hopefully readers can learn some empathy from her.  Unfortunately the entire 5th grade class is so idyllic that I don’t know that most if any kids reading the book will relate to such a well behaved, so accepting, forgiving and generous group of kids. I mean yeah that’s the goal, but its way too overdone.  Ben, Sabeen, and Deja are best friends after the first meeting even though Deja is rude, mean, and doesn’t like them.  I’m not even sure what Ben and Sabeen get out of being friends with Deja?  Deja undoubtedly benefits from them, but there aren’t a lot of compelling reasons given why they’d be so drawn to her.

And finally, I struggled with the theme of how being “American” united them all.  It makes sense when discussing it as a class, that it doesn’t matter their color, income, life experience, whether they were immigrants or born in America, but the concept comes up again at a critical point when Ben and Deja are on the subway and seems so misplaced to me.  On the subway there would be plenty of tourists and visitors, that wouldn’t be American, no?

The book is clean, it does mention some drunk people at the shelter, but nothing specific, just in passing.

I wouldn’t do this as a book club selection because the target age is lower than who I meet with.  But, even despite some of my criticisms I’d recommend this book be in classrooms and school libraries as it does offer up a perspective on historical fiction that hopefully could lead to a slightly deeper understanding of the events at a young age.