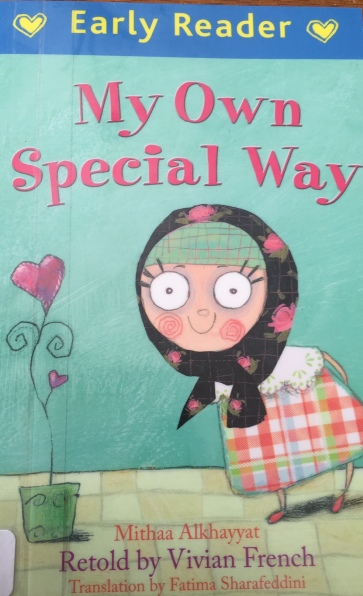 A mainstream Early Reader book with a cute little muhajaba on the cover and a premise that she’ll be a big girl when she wears hijab seemed like a book I should adore.  And while it isn’t bad, and I’m glad it was in the library,  really I’m not sure how I feel about it. 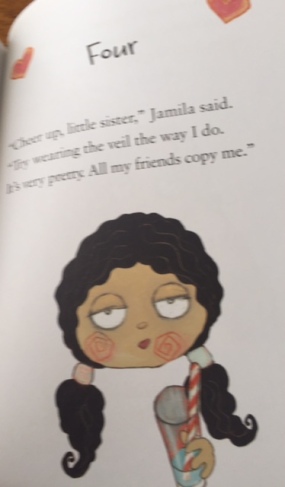 In someways, I’m just confused.  Why would you pick one of the characters to be named Hind, in a book urging readers away from picture books and into chapter books, it isn’t going to be pronounced with a short i sound, it is going to be pronounced like a “be-hind,” umm not so good for the age demographic you are trying to show another culture to, there will just be giggles and jokes.  Also, many of the illustrations are cute, but what is wrong with the dad and with Jamila’s sleepy eyes, they kind of border on creepy. And not the creepy, in a cool way, more like creepy in an awkward way.  And finally, with an author, a retold by, and a translator, and presumably a ton of editors and proofers at Orion Children’s Books, I found veil to be a very formal word to use throughout.  It does say it is a scarf at one point, but the word of choice throughout is veil, and I think to be culturally accurate, hijab would have been a better choice.  Even for English readers, scarf would have been a better fit.

The book is 62 pages, there is no glossary and it is not AR, but is a transition early reader book for kindergartener and first graders.

Little Hamda wants to spend time with her four big sisters, but they all say she is little and have other plans.  When her mom reminds her that they were small at one time too, she realizes that when they were small they didn’t wear hijab, or in this book, a veil, and now they are big and where one when they go out.  So, in her mind, once she starts wearing one, she too will be big, and thus the challenge of finding a way to wear it comfortably begins.  She is helped and supported by all her family and finally she finds her own special way to wear her veil.

I like that it is a mainstream book trying to include some diversity.  The family is relatable and the themes universal even if portrayed in a minority muslim framework.

I love the premise of the book and that it is very clearly Hamda’s idea to wear a veil, no one is forcing her.  The text and illustrations align to show the girls cover when they go out, not in the home.  The dad needs help at one point finding his shoes to go to the mosque.  However, it doesn’t tell what a mosque is, or explain that the family is Muslim and wearing hijab is an Islamic act, which might be a comprehension block for young readers.

I really go back and forth on the illustrations.  On the first reading I thought they were creepy, when I went back to write the review they were kind of cute.  When I asked my kids, two said they were fine, and one said they were ugly and was positive I am the only one to have ever checked out the book.  Yeah.

Fine, and Islamically nothing erroneous.

Obviously not a book club level book, but I would be very interested to have some first and maybe even second graders read it and give me feedback, like I said I’m on the fence with this one.  Check to see if your library has it, read it, have your kids read it, and let me know.