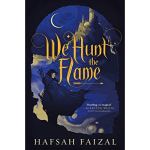 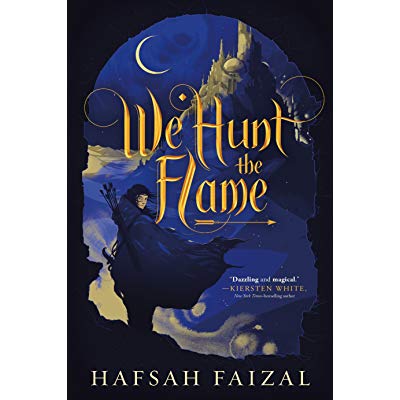 A mature upper middle school/high school aged fantasy romance, written by a nikabi and filled with ancient Arab imagery and Arabic words.  Story-wise it read to me like a mashup of Hunger Games and Ember in the Ashes, and while the overall story is good, the first 60 pages of world building were utterly confusing to me.  I told myself I would read at least 100 pages and then decide if I wanted to continue, luckily before I hit 100 pages I found a glossary of terms, characters, and places online, and the story moved from world building to character development and I enjoyed the rest of the ride.

In a world that is slowly being taken over by the dark magic that is the Arz, a deadly forest that surrounds the country of Arawiya, one girl in one of the five Caliphates, Zafira, dares to venture into the darkness to hunt game and prevent her people from starving.  Unfortunately the Caliph of her state looks down upon women and this regular heroic act must be done with her impersonating a man and keeping her efforts as covert as possible.  Life for Zafira is hard as she not only juggles this masquerade, but her father has recently been killed, her mother is mentally absent, her best friend is getting married, the Arz is growing, and the people around her are starving.

In more or less alternating chapters we also learn of Nasir, the ‘Prince of Death’ who is an assassin for the Sultan who has also now taken over as Caliph of Sarasin.  Forced to kill innocent people by his heartless father, Nasir also is mourning the loss of his mother,  as he tries to earn his father’s approval and find some validation for his current life.

The two characters come together when an immortal witch summons Zafira to retrieve a magic book from a cursed island beyond the Arz and Naisr’s father sends him to intercept her.  The majority of the book takes place on the island of Sharr, an island that is not only a location, but a living consuming character, and involves a variety of other enchanted beings from the various states.  An immortal Safin, Benyamin, one of nine elites, Kafirah, and Altair, a general from Sarasin that weaves them altogether and complicates everything.   This group, the zumra, must work together to save Arawiya, while constantly evaluating how much they can trust one another, as well as themselves.

I love the detail and was pleasantly surprised with the pacing.  The chapters are short and kept the plot from dragging for 471 pages.  Having read it and enjoyed it, I don’t know that I can properly discuss it though.  There are things that I just accepted and moved on with without pondering over, because I don’t know if I understood it well enough to even ask the question aloud.  That being said, I feel like I got the story and I understood where the characters were coming from and I closed the book feeling satisfied and willing to read the next one in the series.  The characters grow and develop and they have a satisfying arc without being overly cliche or predictable.  I think Nasir grows much more than Zafira and knowing that the next book is more focused on him, intrigues me.  Altair is by far the most fascinating character and I hope to see more of him as well.

There is a map at the beginning of the book that I referenced A LOT, and truly I have no idea why the glossary and character list was not included in the book, as it is desperately needed. There are a lot of Arabic words and I would like to get an Arabic speaker’s perspective on how knowing what the terms meant affected the story comprehension.

I like that Zafira has to find confidence in shedding her cloak and stepping in to herself, but I felt it told it more than it showed.  Some of the states are governed by women, the founders are women, that I didn’t feel her fear in hiding her gender.  Similarly, I wanted more information on who/what exactly the Lion of the Night was/is and where the affinities come from.  Perhaps minor points, but details that kept me from immersing myself in this fantastical land and kept me feeling like an outsider peering in and trying to connect with events just out of reach.

There is a lot of killing, and some of it gruesome.  There is abuse and details of branding and a tongue being cut out.  There is alluding of sexual acts but nothing defined, random comments between characters and implications of girls in a room in the morning.  There is kissing and an intense makeout session that is used to achieve a battle goal, but it is detailed and the characters reflect on how it made them feel in terms of desire, longing, wanting, etc.  So, while it is there, it is there for a purpose other than titillation, that is why I think mature middle school could handle it.  There is a scene in a bar, but none of the main characters drink.  There is some language, albeit not in English.

I don’t think I could do this with 6th graders in my middle school book club, but I will definitely suggest it for the high school one.  I think there are a lot of ways things can be interpreted and because it is a fantasy there is no right or wrong which would make the discussion fascinating.  The romance I think makes the book lean to being more female oriented, but I think there is enough action that boys will also enjoy it overall as well.

The book just came out, so I’m sure in the next few weeks and months there will be more tools, more interviews, and more details of what is to come in the series.