It is hard to know what a child would get out of this 32 page 3.2 AR level, but even if they just get lost in the pictures, and swept away by the idea of a boy searching for his name and a dream, I suppose there is value.  Some, ok most of Idries Shah’s, Sufi teaching stories are beyond my comprehension, but they are lyrical and often silly just the same. He has written over 30 and the libraries have quite a few, and people online seem to love so many of them, so perhaps I’m just not clever enough or philosophical enough to grasp them.  Which is neither here nor there, but maybe don’t buy one until you read one and see what you get out of them.  I keep checking them out and hoping I too will fall in love with one, I’ll keep you posted.

Before they can name their son an old man comes and tells the parents to not name him and to wait.  The boy grows up searching for a name, hoping someone has one he can have.  At one point he is made aware that he has nothing, even to trade for a name.  He responds that he has an old dream he no longer wants.  He and his friend Anwar then go to the wise man and he receives his name and a new dream.

The synopsis claims that patience and determination is learned, but I couldn’t get over the fact that the parents just didn’t name their child, and I never felt like I learned why he was such an important boy. 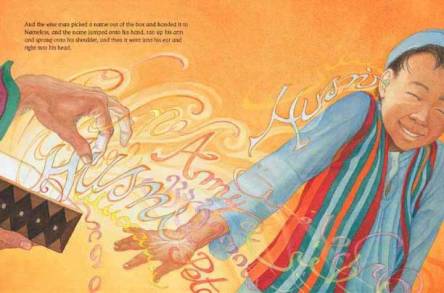 The pictures are wonderful with the scenic village’s tall minarets and colorful hijab clad women in the market place.  I particularly like the magic spilling out of the boxes in the old man’s house when the boys are finding names and dreams.  There is nothing overtly Islamic in the text, I’m not aware of how strong the Sufi origin is, not being Sufi, or having studied it.  But the illustrations definitely place the book in an Islamic cultural environment and the names reinforce this.