At 231 pages this book claims to be for ages 9 to 18 and that’s a pretty large spread for a mystery, yet alone an Islamic fiction one by a first time author.   In a tone reminiscent of Nancy Drew and the Hardy Boys,  it should really should just say 9 and up, I was hooked!

Adam and Layla along with their younger twin brothers Hassan and Hakeem from America are visiting their family home of Bayan Bluffs in Midan for the summer.  Their grandfather and great aunt and a few long time servants aren’t much entertainment for the children, so their parents arrange for their college friends kids’ Zaid and Zahra from Crescent City, a few hours away, on the other side of Midan to join them.  The children get along right away and decide to try and solve a mystery of a hidden treasure that they have heard bits and pieces of over the years.  Their search for the Moon of Masarrah starts innocently enough, but quickly escalates as they learn they aren’t the only ones searching for the missing gem.  As they learn more about the jewel and the circumstances of its disappearance the gem and the murder of Adam and Layla’s great grandfather get further entwined.  With a few of the suspects still alive and many of their family members still in the city, the children soon find they themselves in danger as well.

The biggest reason I like it, is it is well written.  There aren’t confusing passages, or too many characters or boring preachy paragraphs.  The plot is good, the dialogue believable and the fact that they are Muslim children, just depth to the story.  They plan to meet after asr or before Jummah, and they say inshaAllah and mashaAllah, and its just a really good balance of who they are, but not all they are.  In retrospect, maybe they all get a long a little too well, but it isn’t syrupy and they have some minor annoyances, so it doesn’t hinder the story.  The only thing I caught myself looking back on was the age of the twins.  At times they seem like toddlers and at other times much, much older.  Even the author says they are “about six years old,” and having a six year old myself, I do believed that they can vacillate to both extremes in any given moment and thus I accepted their antics and let it go.  Additionally I wish she included a map.  It isn’t confusing, but it would have been great to look back upon as the action speeds up, and would definitely help younger readers visualize the details.  The terrain vocabulary for anyone younger than nine might need some explanation.  There is a glossary at the end for some of the Arabic words, and for some of the specific ships and weapons mentioned.  Their are a few illustrations that I think help the younger readers, they aren’t needed for the story, but they don’t impede it either.  I wasn’t crazy about them within the story, but I did appreciate that they show the girls in hijab and the illustrator clearly put a lot of work in to them. 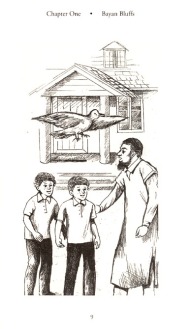 I wish that the cover was more appealing, for a story that was so good, I wish it begged to be picked up.  InshaAllah word of mouth will carry the book, so that more like it are written and published.

None, mashaAllah it is clean and wholesome.  There are good and bad Muslims and no judgement is put in a religious context.  There is some violence, but it is nothing even a seven year old would find offensive.  Alhumdulillah.

I would love to do this as a Book Club book for 5th through 8th grade.  The writing quality and the different characters the students would be able to identify with, would make it a lot of fun.  There isn’t any deep or though provoking discussion points to accompany the book, but I think the genre is hard to come by and Muslim kids seeing Muslim kids solving a crime and going on a treasure hunt, is just exciting.  I couldn’t find any study guides or even much information on the book or author, but none is needed to enjoy the story.  Farah Zaman if somehow you see this review, know that I hope you keep writing, and I thoroughly enjoyed your book!  Happy Reading Everyone!