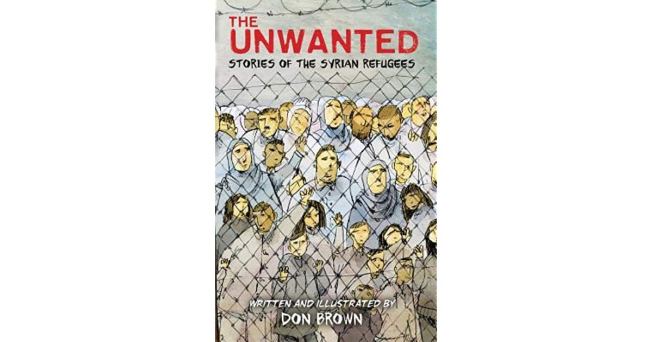 I try and keep an eye on what is available at Scholastic regarding Muslim characters and Muslim authors since for many kids the Scholastic Book Orders might be the most interaction they have with seeing available books, and for others, they may see a book in a library or other book store that they have seen on a Scholastic flyer and pick it up for that reason of familiarity.  Granted I might be completely wrong in this assessment and just be trying to justify my review of a non fiction 103 page AR 5.7 graphic novel that talks about Muslims and refugees, but nonetheless I try and read the Scholastic books that feature Muslim representation to a very captive audience. 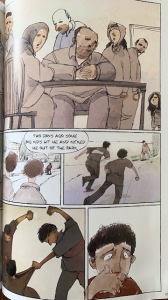 The book takes facts about the plight and flight of the Syrians as they are forced to leave their homes due to war, and the horrors they face on their journeys to finding a new place to call home, and illustrates them.  The book focuses more on the exodus than on the politics that forced them to leave.  There are no characters or story lines, but rather illustrations to the headlines, articles, and facts that detail the truths about the collective experiences of many Syrians.  It seems every single sentence is referenced at the back of the book, which is probably a good thing as it is non fiction and this is a researched book, not a book of anecdotal stories or an OWN voice retelling. 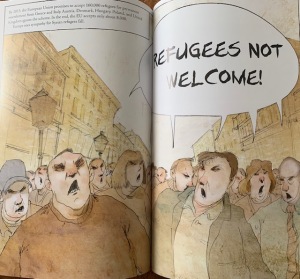 The book in muted tones tells how the young boys scrawling graffiti is what is attributed to the spark that set Syria ablaze with frustrated citizens standing up to an oppressive regime.  The pictures show different factions policing the people for trying to have pianos, to kicking people out of the homes and torturing them or killing them.  As the situation elevates and no end is in sight the book, then follows people leaving by foot into neighboring countries, and then fanning out as border countries refuse to let more people stay.  Eventually, many are forced on to rafts to countries further away, but as their resources deplete, many Syrians have no where to go and are unwanted. 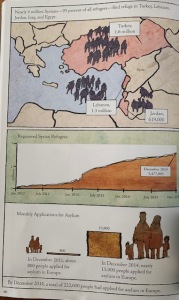 I like that it is real and graphic and violent, it doesn’t show everyone getting a happy ending.  I think many children’s books focus on the heroes trying to help or people having a happily ever after, but by upper elementary, readers need to know that the situation is dire and no resolution is in sight.  The author tries to explain the Sunni and Shia differences by using Christian divisions as examples, and he shows jihadists torturing people, and he does use statements about Islam and music, and I don’t know how a child would take these labels as they don’t come with much explanation.  On the other hand he does highlight that some countries would only take Christian Syrians, so I don’t think he is advocating one faith over another, but the details about Muslims for some reason seemed a little forced to me.

I think his agenda or purpose was to show how the world, with the exception of a few countries, have really turned their back on refugees.  It says in a footnote at the end “that in the first three months of 2018,” for example, “the United States has accepted 11 (refugees) for resettlement.” The facts, the maps, the diagrams, really drive home the point and do evoke an emotional response, which I think is needed.  A few of the pictures are also incredibly resonating, such as the one of the man stating he couldn’t save his family from drowning.

The book shows violence and death. 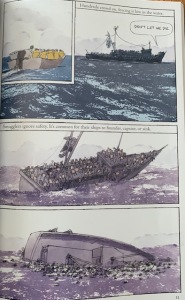 The shortness of the book, might not make it an ideal candidate for a Book Club, but the value in such a book makes it a great addition to any and every classroom.  I don’t know how many children will read this book on their own.  It isn’t fun or compelling, its factual and depressing.  But, I think it is important.  Nonfiction is often hard to convince children to read, so I like that it is a graphic novel and I like that the information can all be verified.  I think children need to be encouraged to read things that might not be easy and fun, and have a way to discuss how such readings make them feel.  Furthermore, If you are a teacher teaching references, this book is a great example.