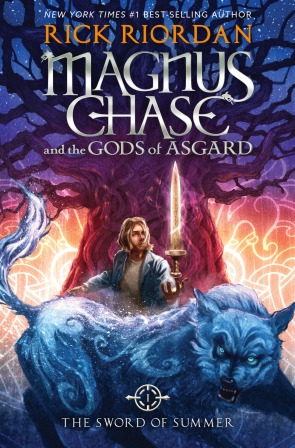 Yes, that is a Rick Riordan book cover you see.  Yes, it is about Norse mythology.  Yes, the whole book is about fake gods and fictional demigods.  Yes, you are on the correct blog.

Brace yourself, if you haven’t heard about Magnus Chase, son of the god Frey, whose series is now on book three, it is ok, Rick Riordan has brought a lot of mythology back to pop culture in a fairly short amount of time.  But this series stands out because get this, the Norse god Loki, (yeah the one featured in popular Marvel Avengers movies), in this series, has a daughter…named Samirah Al-Abbas…who wears hijab…and is a valkyrie…and is an Iraqi immigrant, and is a main character, and is really awesome.

So, the basic plot is much like Percy Jackson, in that a young boy, in this case a homeless orphan, Magnus Chase, finds out that he is demigod and has to basically find some friends and save the world while learning about the given mythology that they belong to.  For Magnus, he learns about his father, Frey, the god of spring and summer, when he dies and is taken to Valhalla, a paradise for warriors in the service to Odin.  The whole book is about Magnus, who is now an einherjar, a member of Odin’s eternal army , trying to prevent ragnarok from happening.  Among his group of friends are Jack, the sword, Blitzen, a dwarf, Hearthstone, an alf, and Samirah (Sam).

By and large, Sam is pretty well developed as a practicing Muslima.  She is being raised by her grandparents and feels bad sneaking out to perform her valkyrie duties.  She is not at all comfortable being alone with males one-on-one, nor being seen with males as she has an arranged marriage to Amir Fadlan, her second cousin, when she gets older.  She wears a green hijab that doubles as a camouflage cloak, and she mentions going to the mosque with her grandma.  (In later books, according to my daughter, she also talks about fasting, how she is a practicing Muslimah and the daughter of Loki who handles all that Norse mythology throws at her.)  She is proud and strong, and really the only thing that makes no sense to me is why she takes off her hijab so freely when not in life threatening scenarios, I get when she uses the camouflage to hide in emergencies.  She apparently explains later that she considers the einherjar her extended family, but that wouldn’t make them her mehram, so it is still a bit sketchy.

Here is an interview question from Entertainment Weekly to Author Rick Riordan about Sam, and his answer: (http://ew.com/article/2015/10/14/rick-riordan-magnus-chase-interview/)

Speaking of Loki, one of my favorite characters in the book is Sam, or Samirah Al-Abbas. I think she’s a great example of a diverse character — not a white man, not a woman who’s there to be a love interest. She’s also seamlessly woven into the history of this myth. Can you talk about the conception of her character?

The idea for her started with the primary sources. The story that Sam tells in The Sword of Summer about an ambassador from the Caliph of Baghdad visiting the Vikings in Russia – that’s true. It really is one of our best sources because the Arabs of the time were reading and writing when nobody else was. That connection back then – that the world was a whole lot more connected even back then than we think of, that these cultures did not exist in these hermetically-sealed little bags, they were blending together all the time – that fascinated me. I thought, what would it be like to have a modern Muslim-American character who still had that connection to the Viking world like the Caliph of Baghdad did all those years ago?

And then again I started pulling on stories from students I’ve had in the past. One very powerful memory I have was being in my American history classroom on 9/11 and one of my students was a Muslim-American girl. She burst into tears when she heard the news, because she knew that her world, her life, had just changed, and had been defined for her in a way that she did not want and could only do so much to control. That really was powerful for me, and it inspired me to learn a lot about Islam and what the tradition actually was, as compared to what we hear about in the media and how it’s often distorted, and to honor her experience. Samirah kind of came out of that confluence of things.

Obviously the whole story features multiple fake gods.  I don’t think it is celebrated though, they are beyond ridiculous, but if your kids can’t understand the idea of mythology or you think it is beyond the scope of fiction, that is your call.

There is a ton of violence, as they prepare for ragnarok and just killing in general, some is gruesome. The book is not dark at all, however, it is in fact laugh out loud funny.

There are some giants that get drunk, mention of mead, some jokes about Hel in reference to Helheim and the goddess of Helheim, Hel.  There are some “damns” scattered in as well.

The stories of some of the gods is a bit scandalous, but for the most part the book doesn’t give much detail.  It does discuss Freya marrying dwarves for a day for their jewels and having kids with them.  There is flirting and mention of kissing.  There is also some mention of males being moms and animals and monsters being born of human parents, it is all very confusing.  But it is there. Also, my source, my 11 year old daughter, mentions that the rest of the series does have a gender fluid character named Alex.

I doubt I’d do this as a book club book, but as any teacher or librarian knows, Rick Riordan fans are committed and enthusiastic.  I still keep in touch with many kids that weren’t big readers until the read Percy Jackson, and once they read the series multiple times, they then jumped to his other series.  So, while I wouldn’t use this as a book club book, there is a ton of kids that would love to discuss it with you, so read it, the bonding as a result will be well worth it.