This 40 page nonfiction biography is beautifully illustrated and informative.  I had never heard of Maryam Mirzakhani the Iranian born, first female winner of the Fields Medal.  Her life from loving stories and not liking math, to becoming a student and later a professor in the United States is remarkable and inspiring.  Second through fourth grade readers that both love and struggle with math will be drawn in to her unique way of looking at the world, and the math she found to serve as her magic wand in explaining it.  I don’t know if she identified as Muslim, while in Iran she was forced to cover, but when she left, she no longer did.  The illustrator is Muslim and religion aside, I am thrilled that a book like this exists, and that such a brilliant woman and her accomplishments can be presented to young readers.

Maryam loves stories.  She reads them to her sister, her best friend Roya and her browse bookstores and dream themselves into plots of their favorite stories.  On the weekends she spreads long rolls of paper on the floor to draw and color her imaginary worlds.  She wanted to be an author when she grew up and knew how lucky her generation was to attend school after the war that tore her country apart. 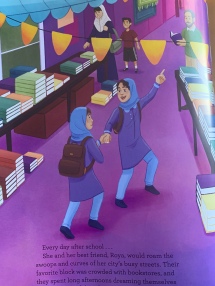 Math made her head spin, she would rather be doodling, but when she was 12 her teacher introduced her class to geometry.  It was different, the numbers held stories and the shapes were pictures. She made stories about the problems and wondered about them as if they were characters.

In high school, Maryam and Roya entered the International Mathematical Olympiad.  The first year they received participation medals, but the next year, Maryam won the grand prize with a perfect score. She finished her schooling in Iran devoting her life to the stories that numbers told and left Iran to start graduate school at Harvard in the United States.

When she had a hard time solving problems she would spread large rolls of paper on the floor and solve them.  Her daughter would tell people she was a painter.  She wanted to stretch the mind and how people went about solving equations.  She became a professor and a lecturer and one of her discoveries became known as “the magic wand theorem.” 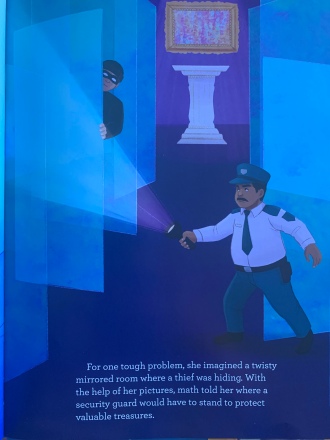 In 2017 she passed away from breast cancer and the world lost a remarkable storyteller, mathematician and human.  The book concludes with an author’s note, important dates, and books to reference to learn more about Maryam Mirzakhani.