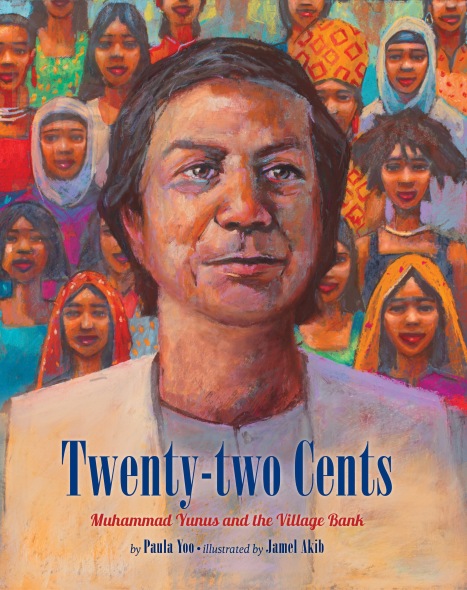 This 40 page biography written on an AR 6.5 level, tells the story of Nobel Prize winner Muhammad Yunus and his microcredit banking initiative.  The book topic is inspiring and for the most part the author does a good job of bringing it down to a middle school level. You can tell the author tries to flesh out Muhammad Yunus by starting the book with him as a boy, and relaying how he was raised and how his parents and boy scouts shaped him.  Despite her efforts however, at times it reads more like a resume, not a children’s picture book. 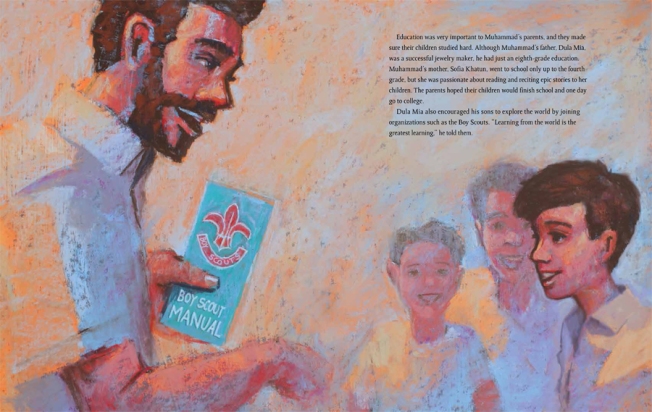 Other than his accomplishments, and work history, I didn’t learn anything about him that made him relatable as a person, nor did I learn much about Bangladesh, or Islam.  And yes, I know it is a biography, but it felt like it was a void that needed filling.   I did learn about the program he started, a few of the obstacles that had to be overcome and I particularly liked that those receiving the microloans also had to learn about money, finance, and banking to pass a test before getting approved  And that 94% of those receiving the help have been women.  Grameen Bank is now a global bank, and the help he has given to so many is truly inspiring and something our youth should understand through humanitarian, economic, and compassionate lenses.

The title comes from the incident that brought Muhammad Yunus’ desire to help to fruition. He saw a woman weaving a beautiful basket, and learned that she could not afford the supplies to weave the basket, to sell in the market and as a result needed a loan.  Banks would not loan the equivilant of 22 cents because it was too small, and money lenders would charge so much interest, that after the basket sold, and the money lender repaid, there was scarce enough funds to purchase enough food for the family, let alone enough to buy new supplies, and thus the cycle was unbreakable.  He wanted to make her and those like her independent, not needing charity or the kindness of others to get her ahead, and thus the seven day course, test, and microcredit system evolved. 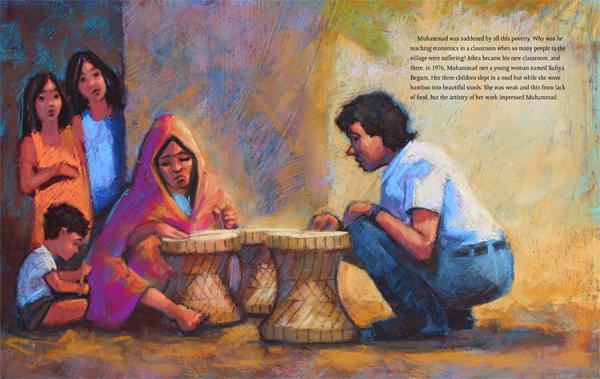 The illustrations I think are both rich and well done.  The effect of the watercolors flesh out the text heavy pages with detail, but don’t create a distraction from the concepts and accomplishments being presented.  Following the story is a two page afterward telling additional awards and continuing the story of Muhammad Yunus with two real life photographs.